Is Wai-O-Tapu worth the money?

Wai-O-Tapu is one of, if not the, most popular geothermal tourist hot spots in New Zealand, but with a price tag of $36 per person, is Wai-O-Tapu worth it? Especially when you can see (and smell) the geothermal activity for free or for considerably cheaper all throughout Rotorua.

We’re not usually fans of big touristy activities but we love anything to do with nature and when you’re in an area that’s as unique as Rotorua, it was hard to resist. So we bit the bullet, held our breaths and spent the day at Wai-O-Tapu; New Zealand’s Geothermal Wonderland. 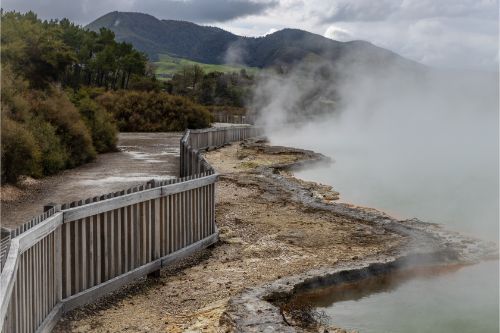 Where, and what, is Wai-O-Tapu

What is Wai-O-Tapu, you ask?

It’s a geothermal area of New Zealand’s volcanic centre. It’s home to some of the most bizarre natural wonders I’ve ever seen – or smelt. They call the tourist park a geothermal wonderland, I’m guessing because you can get lost here exploring what mother nature has created.

It’s just a 1 hour drive South from Rotorua’s town centre, a route that will have you driving down roads with volcanic craters hidden in the bushland that cause either side of the road to steam. It almost looks like a scene from an apocalyptic movie!

The Geothermal Wonderland in Wai-O-Tapu is open to the public between 8:30am and 5pm and costs $36pp. Thankfully there’s plenty of parking, even for larger motorhomes because I hear this place gets pretty busy in the summer! 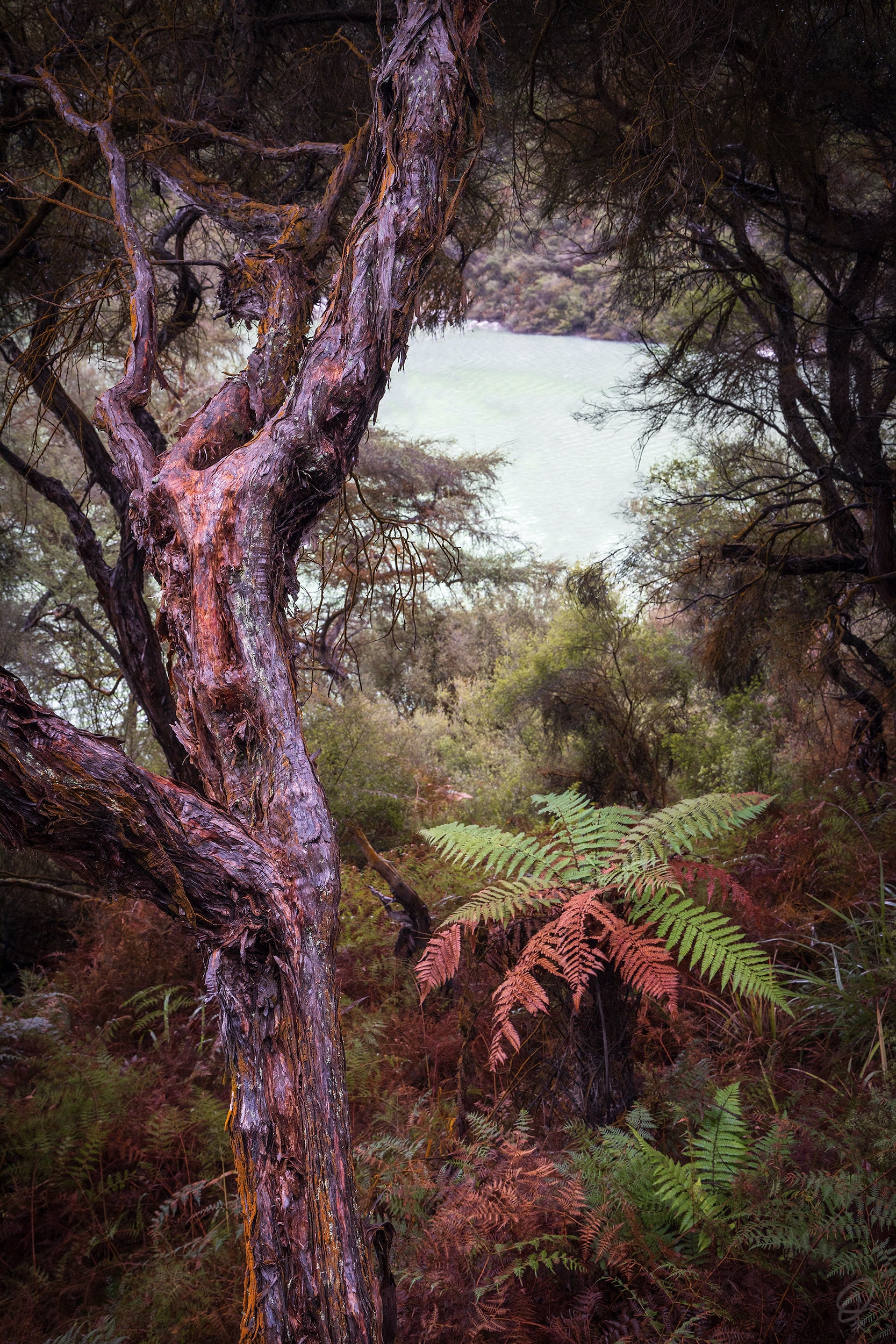 Decay. A piece from our portfolio. Taken at Blue Lake in Wai-O-Tapu

Once you’ve bought your tickets and gone through the security gates – yep, they have security checking tickets and stamping hand – your senses will be hit with their first wave of what Wai-O-Tapu has to offer… the smell.

Don’t worry. It isn’t the toilets or drains, it’s actually coming from the ground! The earth is high in Sulphur around Rotorua, thanks to all the volcanic activity that’s been happening over the years. When the sulphur is released into the atmosphere, it, unfortunately, causes the eggy smell that you’ll experience for your entire time in and around Rotorua.

I wish I could tell you that you’ll get used to it, but for me, it hit me like a tonne of bricks every time I passed through a cloud of steam. I thought I had a strong stomach when it came to smells, Rotorua taught me otherwise!

Exploring more of the North? Read about our time at Mount Taranaki! 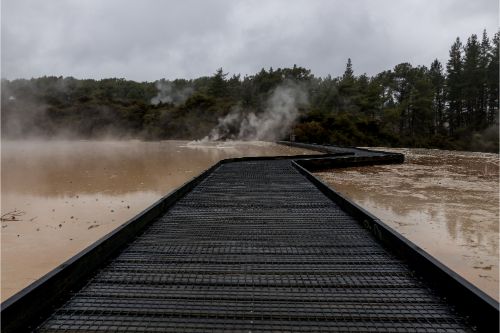 What kind of geothermal activity will I see? – Is Wai-O-Tapu worth it?

One of the main attractions in Wai-O-Tapu is the Lady Knoxx Gassier. This gassier is forcefully set off every day at 10:30am, so if you want to see a bit of volcanic explosion, be sure to get there in time for this!

The park is made up of a series of paths that will take you past a lot of really cool lakes and craters. The first major attraction, after Lady Knoxx, is Artists Pallet and Champagne Pools.

Artists Pallet was formed by over-flow water and minerals from Champagne Pools, so while it’s colours aren’t as defined when the sun hits them at the right spot you can see a beautiful mixture of blues, greens yellows and orange scattered across the rocks, the boardwalk goes straight across Artists Pallet, so you can actually walk through the geothermal steam that comes off the water too!

Champagne Pools is a lot more dramatic than Artists Pallet dues to it’s defined colours. This pool is over 62m deep in places and was formed roughly 900 years ago after an underground volcanic eruption caused the ground to collapse.

Since then it’s filled with water but the heat from deep underground still bubbled to the top, which is what gives it it’s famous fizzing effect – and it’s the reason behind the name. The bright orange colour around the rim is caused by a build-up of the minerals orpiment and realgar (which, after a google, turn out to be sulfides of arsenic) that rises to the top with the bubbles.

The temperature of Champagne Pools is around 75’c at the surface but temps of over 200’c have been recorded at the depths… so it kicks out a lot of heat and a lot of sulphuric stinks too.

After Champagne Pools the track winds through several open craters, some with bubbling mud in the bottom and some so deep I didn’t dare lean over the fence to see how far it goes. 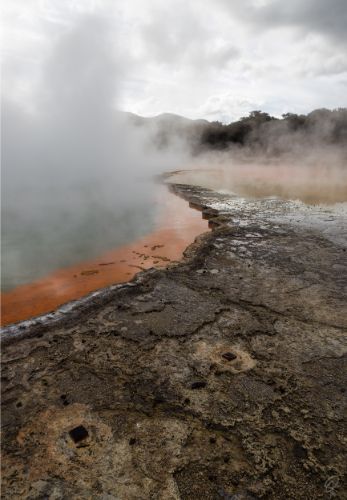 The ground is always changing in these areas, so it’s really important that people stick to the marked paths to avoid any crumbling and unstable ground.

Blue Lake is at the furthest point of the walks, and in the right light you can see its vivid blue colour. This again is due to minerals in the water and the atmosphere being just right for a chemical reaction. Keep your eyes open for the gecko too, he’s pretty hard to miss.

Our favourite part of the geothermal wonderland was without a doubt Roto Kārikitea, or more commonly known as The Devil’s Bath. This lake looks exactly how it does in the photos, which really surprised me. I always thought the colours might have been slightly tweaked to make it look more vibrant but nope. It really is a fluorescent green.

The Devil’s Bath is a sunken pool, formed in the crater of a volcanic eruption. It’s magnificent colour comes from the fact that this pool is made up of mostly sulphur. While there aren’t isn’t any spectacular volcanic activiy going on here like what you’ll see at other pools, the colour and the eerie feel around this particular pool is what made it our favourite part of the whole day. It looks almost like a chemical spill that has come stright from a comic book. 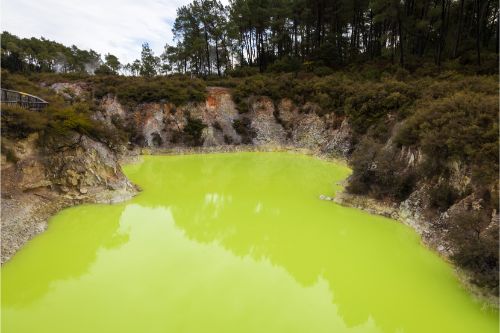 If you haven’t had enough of watching the ground boil by the time you reach the end of Wai-O-Tapu, and want to see a ‘natural mud Jacuzzi’ then be sure to swing by the mud pools on your way out.

These are just outside the geothermal wonderland so they’re free to visit too! As my little nickname suggests, these mud pools are bubbling pools of mud, formed by escaping hot gases traveling up from deep underground. It’s scorching so don’t get too close and watch out for any stray explosions! It can get pretty messy when the activity peaks.

Is Wai-O-Tapu worth it?

Now you know a little bit more about the place, you’re probably wondering what we thought!

At first, we were expecting it to be a place that has been overhyped over the years but we actually really enjoyed it and it just about lived up to its expectations, it was bigger than we expected but parts of the walk, particularly the bushland sections, can get a bit repetitive – a few signs about the native plants/birds would be a great addition to break it up a bit.

I think a huge part of us enjoying it so much was due to how few tourists there were. We went in the knowledge that this was a crowded place, even in the winter. So being able to stand and view the pools without pushing through hoards of people was a really nice surprise. The experience would be completely different in the summer, I’m sure.

So yes, I think Wai-O-Tapu is worth the money… in winter. $36pp is a little steep in summer when the crowds are bigger and you’re left fighting to see things or queuing around the walkways but I know it isn’t the most expensive thing to do in New Zealand either.

Try looking at BookMe.com to see if you can save money by booking tickets online. They weren’t available for our visit but this website often has some great deals for the bigger tourist attractions and activities!

There are a few other similar places close by but they don’t have The Devil’s Bath, which is where we got our money’s worth – I’ve never seen anything like it before and I doubt I will again. Whereas champagne pools, the mud baths and the other thermal activities are replicated throughout Rotorua and even other parts of the world. 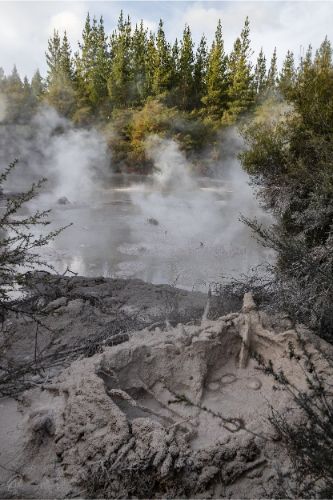 We really were quite surprised by how much we enjoyed our time at Wai-O-Tapu geothermal wonderland and can’t wait to return with family when they visit… it’ll be interesting to see how different it is in the summer! Have you ever visited any geothermal places?

If you’re looking for other things to do on New Zealand’s North Island, we have a growing list of recommendations here. Don’t forget to click share if you think others will enjoy this post! 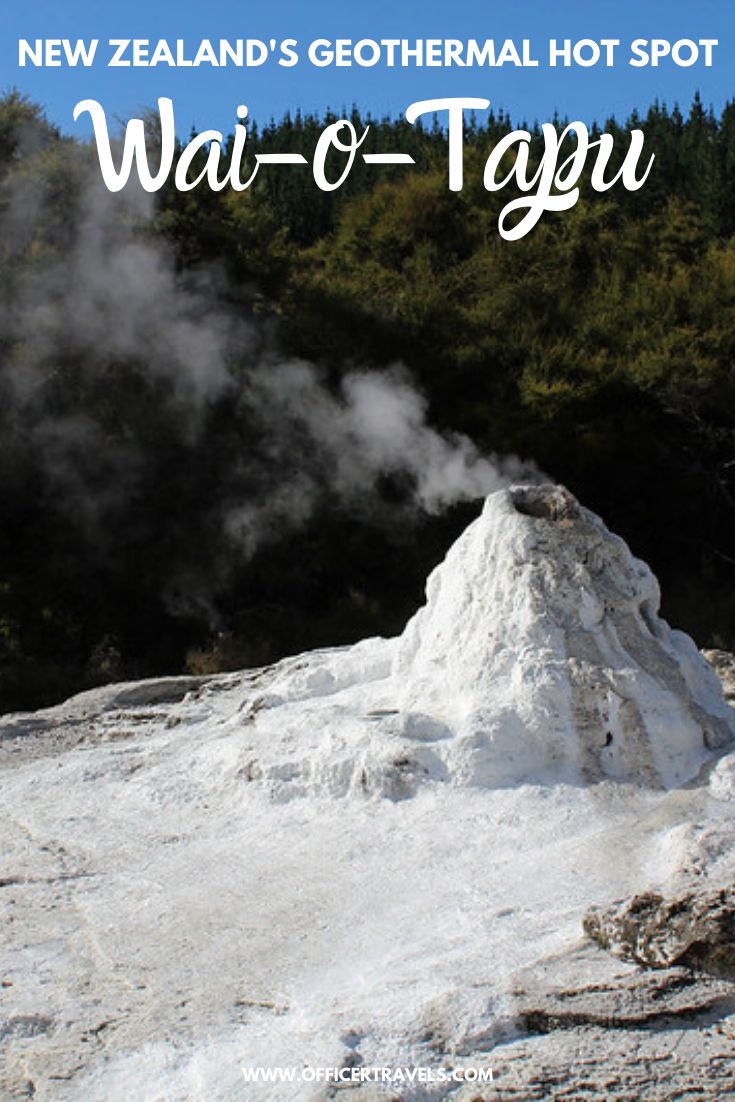 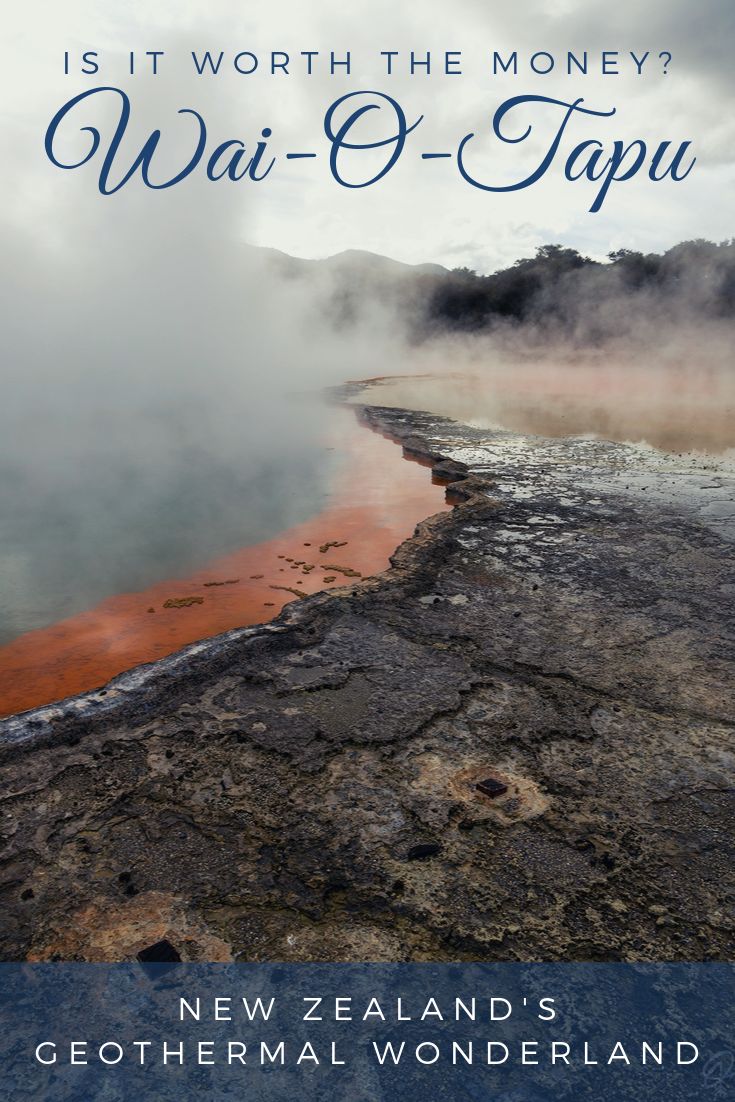 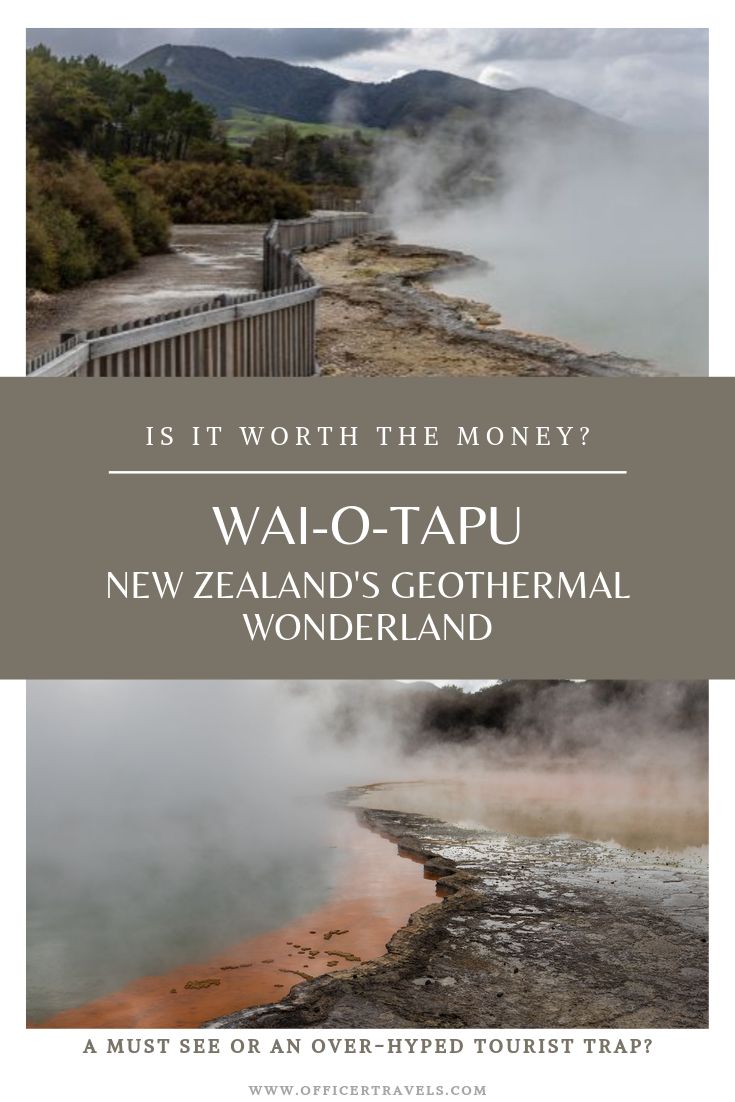 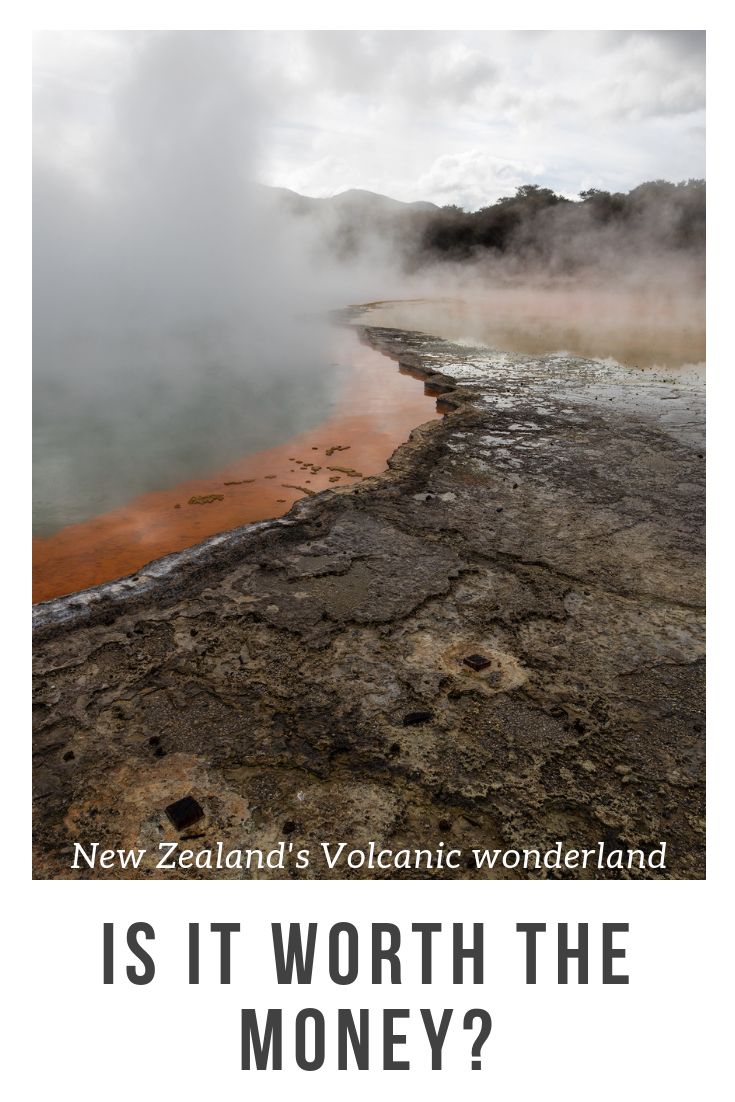