What springs to mind when you think about driving The Forgotten World Highway? Bendy roads that weave through wild, overgrown rainforests? Old road bridges that would have even the bravest of drivers on the edge of their seats? Villages that look as though time has stood still? If you answered yes to all of these then what you’ve imagined is, in fact, New Zealand’s State highway 43, or more infamously known as The Forgotten World Highway.

Locals describe it as being ‘a bit up and down’ but it’s actually made its way into the Top 10 worst roads in New Zealand by kiwi police while at the same time also being one of the most scenic drives in the world. We can see why. 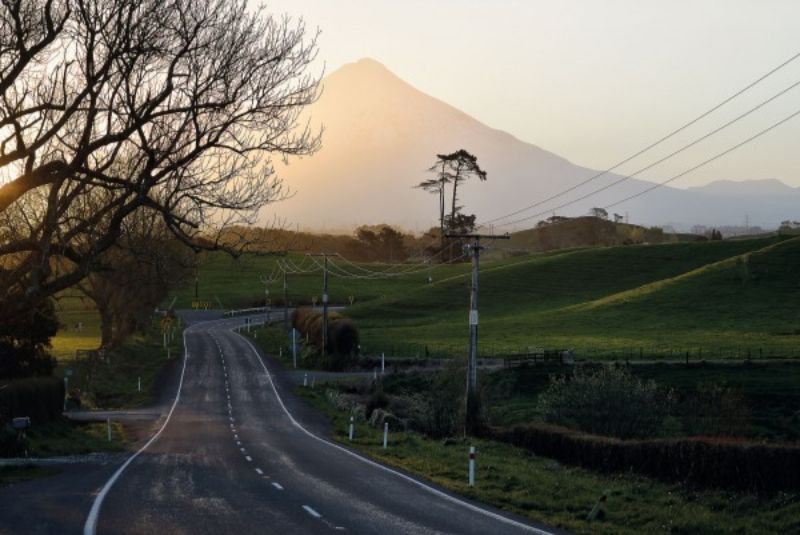 During our 5-week road trip around the North Island, we found ourselves looking for a way to get from Taranaki to Lake Taupo and driving the Forgotten World Highway seemed like the most direct route. But would our 7m Motorhome make it down this treacherous road in one piece? Just exactly how bad is it? And is State Highway 43 suitable for large vehicles? These are all questions we answer in our guide to driving the Forgotten world Highway.

Why is it called the Forgotten World Highway?

Up until 2002, this almost abandoned road was called State Highway 43 until it was rebranded as the Forgotten World Highway – possibly due to the wild nature of its landscape and the fact that very few people were using it at the time.

It is one of – if not the – most secluded roads in New Zealand. It was originally a bridle path built in the 19th century (giving it another title of being one of New Zealand’s oldest roads too!) that allowed farmers to traverse the difficult terrain between Stratford on the West Coast and Taumarunui on the edge of the Tongariro National Park.

According to those living in Stratford, the highway is a little busier than it once was but we saw a grand total of 2 other cars throughout the day that we spent driving the Forgotten World Highway. 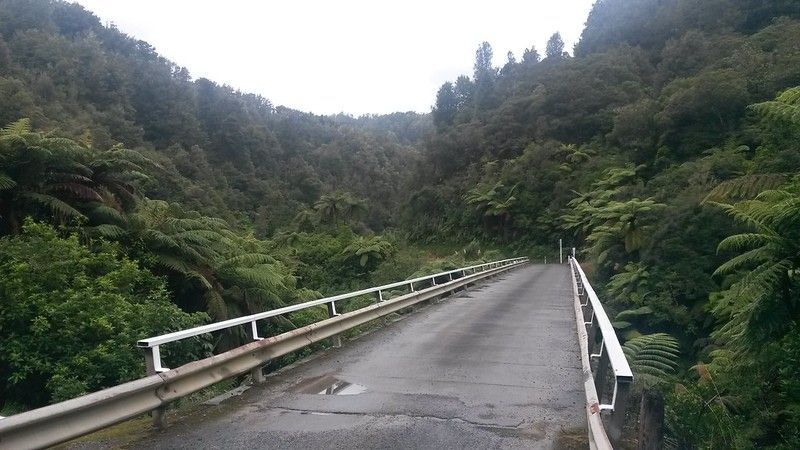 Where does the Forgotten World Highway go?

State Highway 43, or the Forgotten World Highway, starts/ends at Stratford and travels inland for 150km North through dense forest and natural gorges before reaching Taumarunui just south of Tongariro National Park. It’s the perfect scenic route for those looking to get from New Plymouth/Mount Taranaki to the Tongariro National Park or anywhere in Central North Island.

What is there to see on the Forgotten World Highway?

Lots and at the same time, not much without a few minor detours. Being ‘forgotten’ means you can forget about the usual touristy things you would normally find on a popular road trip route, like cafes + roadside attractions. That being said, it was hard for Dec to drive as he was constantly wanting to see what was passing us by. Thankfully there are plenty of places to pull in for photo opportunities and a couple of really nice view spots once you reach the top of the saddles – of which there are three; Strathmore Saddle, the Whangamomona Saddle and the Tahora Saddle.

You come via this highway purely for the scenery but there are just a few of the highlights of our trip down State Highway 43;

Our most memorable of the things to see along the Forgotten World Highway is the ‘Hobbit Hole’, or Moki Tunnel. This 180m long tunnel drops down to a single lane road and is like no other tunnel I have been through. For small cars, you’ll be fine, but for bigger vehicles driving the Forgotten World Highway, it’ll definitely be a bum twitching moment.

Why? Because this tunnel is hand-carved through a mountain and just wide enough for one car. And I mean JUST.

The Moki Tunnel was hand dug with pick-axes in 1935 and was originally only 5m tall! Thankfully in 1989, they lowered the road to increase it’s height to 7m – this tunnel was built in the era of horse & carts and man does it show! 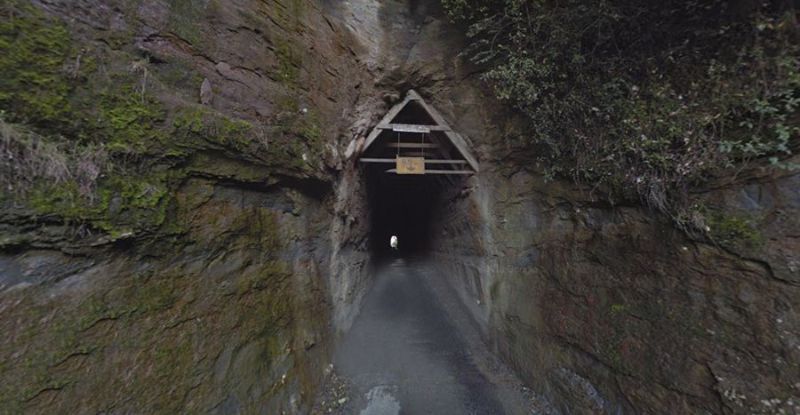 Similar to another North Island bridge called ‘A bridge to nowhere’, this bridge was built in 1937 across the Whangamōmona River and actually leads somewhere (duh?).

It requires a little bit of a detour (23km gravel road each way) off the main road of the Forgotten Highway but it’s worth visiting for its modern design for the 1930s and for the trip through New Zealand’s true backcountry. It isn’t suitable to be crossed by vehicles so you will have to come back the way you came – despite what google might say – so bear that in mind if you’re conscious of your fuel consumption.

We would have loved to have visited the Bridge to somewhere but unfortunately didn’t want to risk it in our hire camper.

Want to get out and stretch your legs amongst the forgotten forest? While driving the Forgotten World Highway, Look for Paparoa Road and continue to Te Maire Valley Road, you’ll find Whanganui National Park, Te Maire, signposted along here.

Once you reach the small car park there are heaps of walking tracks available ranging from 30 minutes right up to 4 hours!

The little village of Whangamomona should definitely be on your Forgotten World Highway itinerary because it’s actually classed as its own country! There really is no missing it, the Forgotten Highway goes straight through it and you’ll be welcomed by big signs announcing the border crossing.

In 1988 there were plans to split this town between two separate districts; Taranaki and Manawatu-Wanganui. The locals were pretty miffed about the changes so they partitioned to go independent – and won!

In 1989 Whangamomona was deemed a republic and has since had 5 presidents but guess what – only two have been human! The others include a goat, a poodle and even a turtle who were all voted to act as the president of Whangamomona!

Whangamomona has barely changed since the ’80s, except they have a few more tourists passing through these days, so be sure to stop and have a drink at its pub, chat to some of the locals and check out the unchanged highstreet.

This waterfall is the North Island’s second-largest waterfall and is worth the 15km detour from the main stretch of State Highway 43. Simply turn off from the Forgotten World Highway at Mokie Road, then Mangapapa Road then Okau Road and you’ll soon find yourself at the base of Mt Damper Falls. This detour takes approx. 20 minutes each way.

Here’s another unique stop for you to do while driving the Forgotten World Highway, and a pretty awesome place to camp if you want to extend your exploring!

Tangarakau is a forgotten town hidden amongst what is now the wild forest of the Forgotten World. Railway workers used to call this place home but once the railway construction was complete they all headed back to civilisation, turning Tangarakau into a ghost town almost instantly.

These days the area surrounding it is a working farm and campground, there isn’t much left of the town itself but it’s a great place to stop and learn a little bit about New Zealand’s Pioneering history and how things became what they are today.

You’ll also find Raekohua Falls on the side of the road as you get close to the Ghost Town! 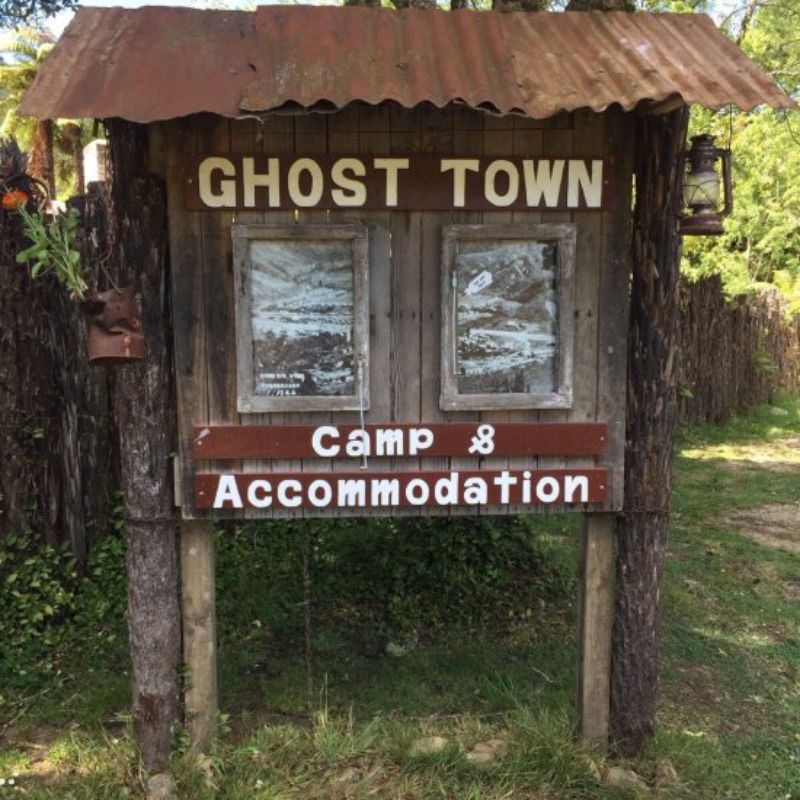 Is the Forgotten World Highway safe for large vehicles?

We were travelling the Forgotten World Highway in a 7m long Britz Motorhome and we survived. That being said, Dec is used to driving large vehicles on sketchy roads thanks to his line of work.

The Forgotten Highway is narrow in places, has lots of bends and steep sections plus about 15km of unsealed (gravel) road. If you’re not confident in a ‘normal’ sized car on these types of conditions I highly encourage you to take the coastal route instead.

Don’t forget the low tunnels too! If you’re over 6m tall, you probably won’t fit through the Hobbit’s Hole and will find yourself having to come back the way you came.

As a whole, I think this road is ok if you drive safe. Here are a few tips on how to drive safe on the Forgotten World Highway;

A quick round up

Have you ever heard of the Forgotten World Highway? It was a real treat to be able to spend the day exploring it in our Britz Motorhome. The North Island is full of some really unique places, you just need to know where to look! If you liked this, check out our list of 20 unique places to visit on New Zealand’s North Island and add a few more places to your itinerary! 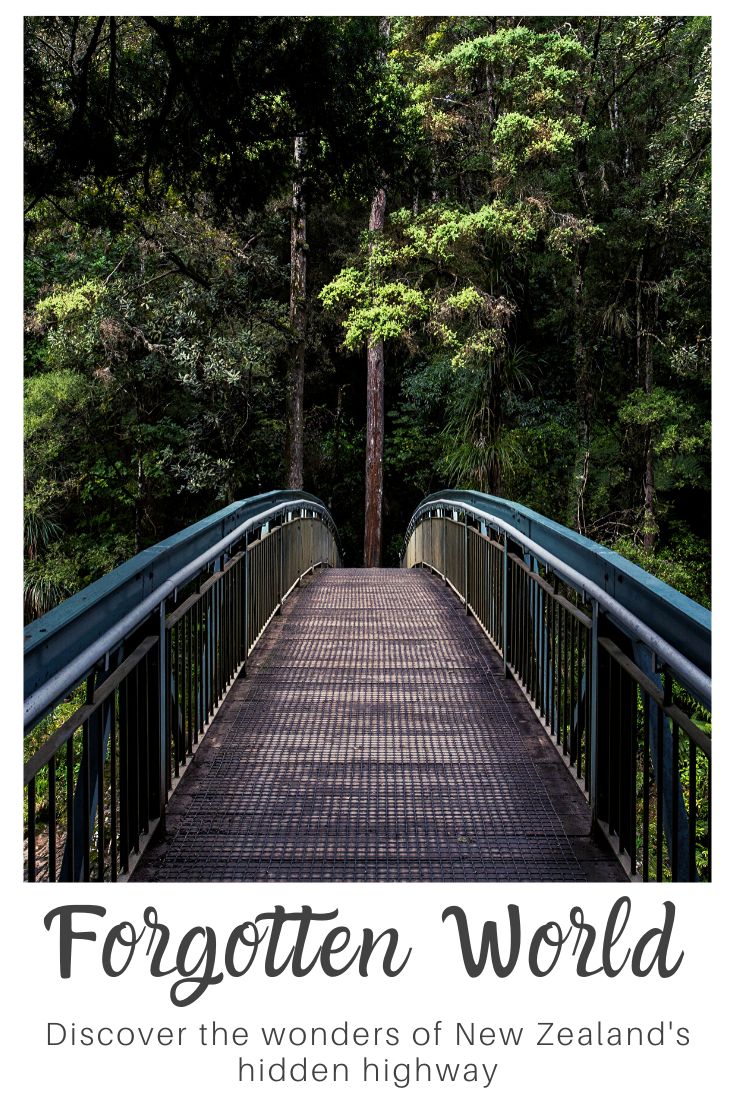 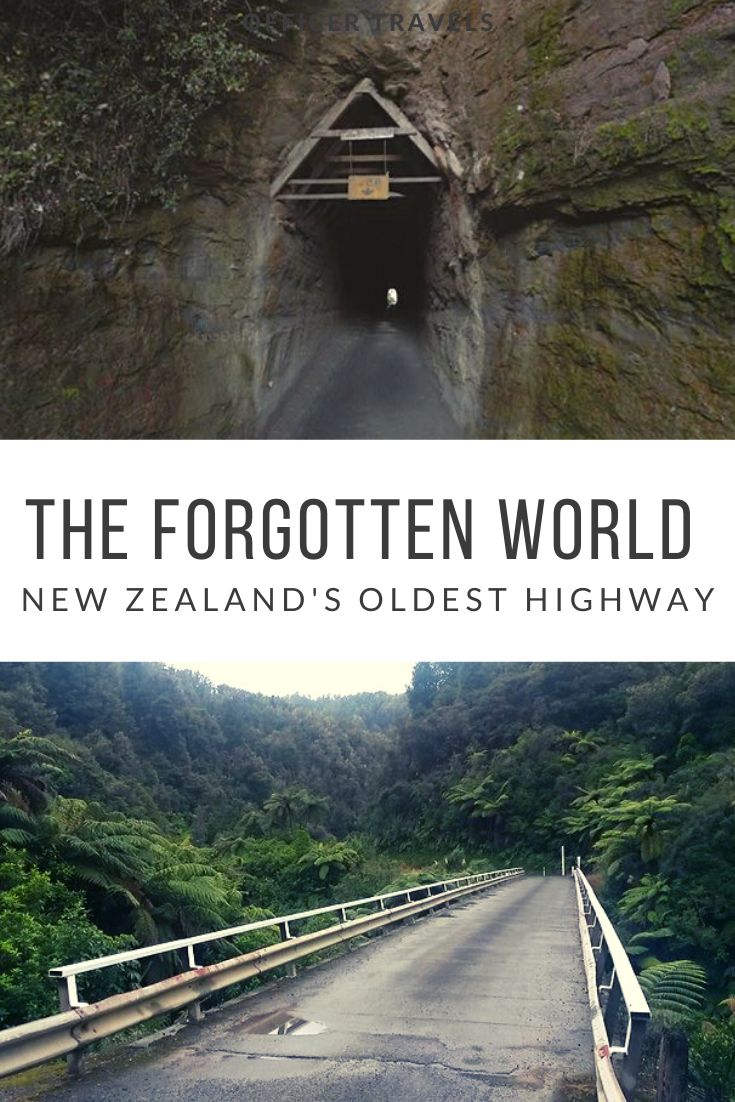 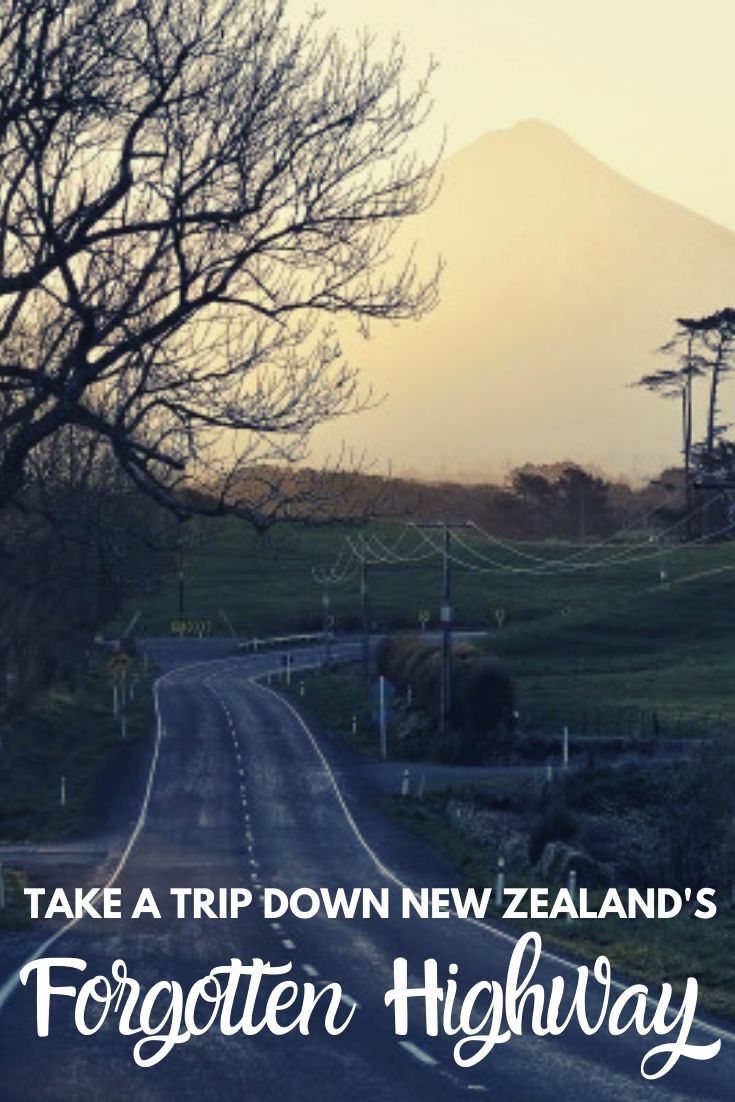 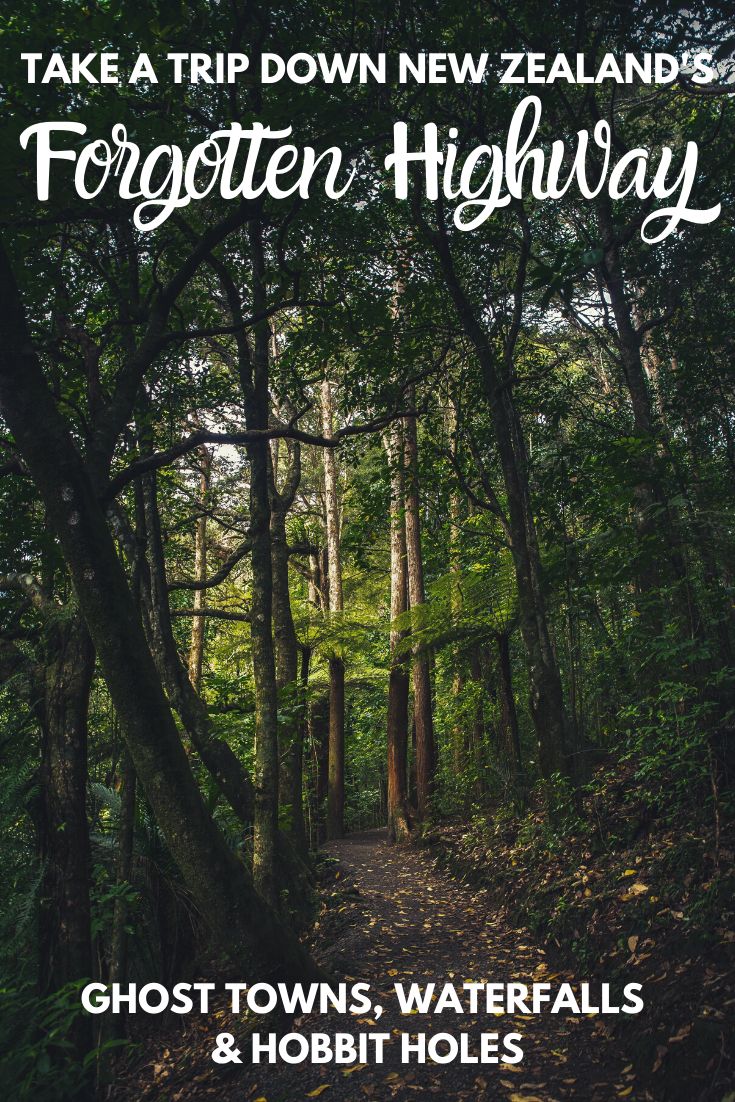