9 Free Things to do in Waitomo

That You Didn't Know Were There

Waitomo is well known for glow worms and adventure tours. The area around Waitomo is beautiful and well worth a visit, but are there any free things to do in Waitomo and the surrounding area? You’ll be pleased to know that there are plenty. So you don’t have to zip in for your tour and leave the same day. Hang around and enjoy some of these free things to do in Waitomo too! 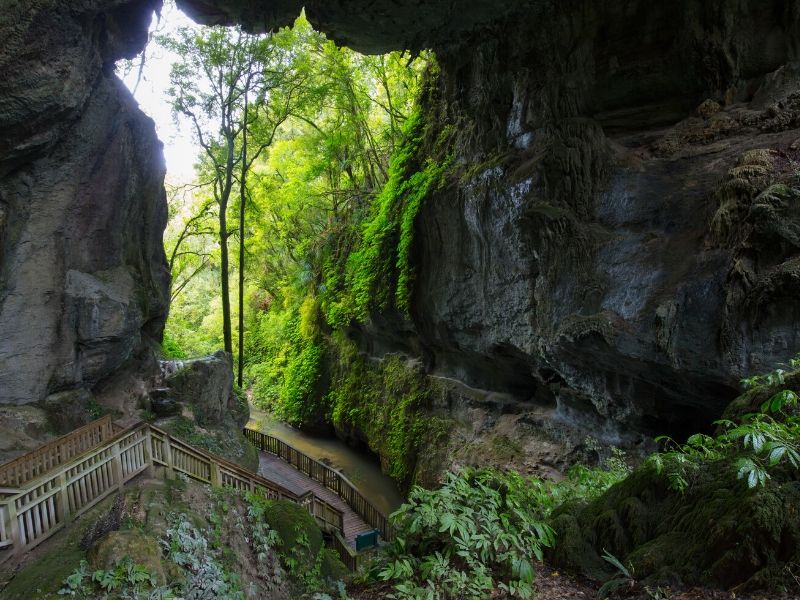 So where is Waitomo? Waitomo and the famous glow worm caves are just a short one hour drive South from Hamilton. If you’re travelling in your own car, both routes 3 and 39 offer beautiful roads. It’s always safe to assume it will take you an additional 30 minutes if you choose to stop for photos.

If you don’t have your own vehicle, there are regular buses operating from Auckland to the Waitomo Caves. However, these will only get you as far as the tour caves so unless you bring a pushbike with you, you will miss out on most of these free things to do in Waitomo because they’re a bit of a drive away.

Free Things to do in Waitomo

We spent a couple of days around the Waitomo area on a mission to see as many of the free glow-worm colonies here as possible, this went hand in hand with exploring a few other free things to do in Waitomo and the surrounding area.

Most people who visit Waitomo do so because they’ve booked an adventure glow worm tour, then quickly dash off to the next destination. Many do not realise that there’s a whole host of free things to do in Waitomo, just waiting around the corner.

The roads around Waitomo lead to some beautiful waterfalls, hidden caves and even free glow worm colonies, so carry on reading to find out more;

Mangapohue Natural Bridge is only 30 minutes away from Waitomo down Te Anga Rd.

The short walk through the gorge will lead you to Mangapohue Natural Bridge, a tall 17-meter natural limestone structure that arches over the gorge. On either side of the walkway, you’ll see tall mossy green walls that in the daytime look rather normal, but they’re not. 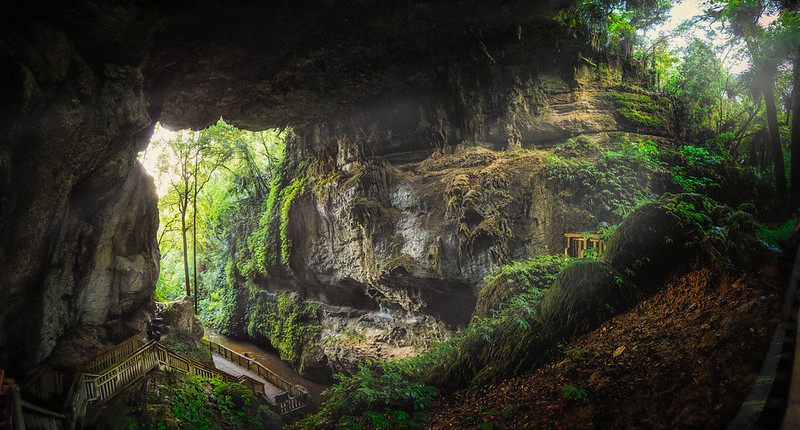 Once the sun goes down, both sides of the gorge (and the roof of the arch) light up with the blue glow of twinkly glow worms. We’ve seen our fair share of glow-worm colonies in New Zealand, but this one is our favourite!

From Mangapohue Natural Bridge, you can either head back the way you came, or continue through the archway to the 30-minute loop walk that will bring you back out near the car park.

The loop walk will take you through farmers fields that at first glance kinda feels like nothing special. Until you come across the fossilised oysters. There isn’t much information about these fossils, so I’m unsure whether the whole rock is a giant fossilised oyster… or if it’s the shell shapes within the rock. It’s likely the 2nd option but I don’t know about you, but I enjoy the idea that oysters were huge once upon a time. 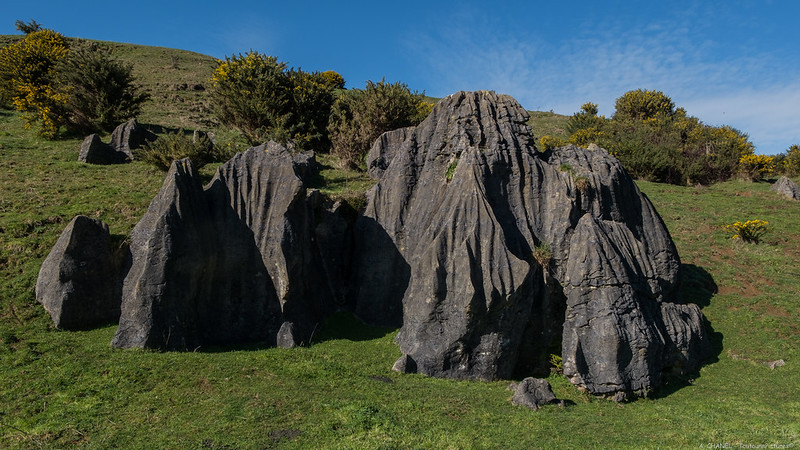 Just down the road from Mangapohue Natural Bridge is the Piri Piri Cave. It’s only a short 300m walk from the small roadside car park to what is one of the very few Waitomo caves that are open to the public for free. Guess what… There are glow worms here too!

The track to the Piri Piri Caves is one of the easiest Waitomo walks but be careful on the steps that lead down into the cave. Obviously it’s a damp environment in there, perfect for glow worms but a nightmare for slippery steps. 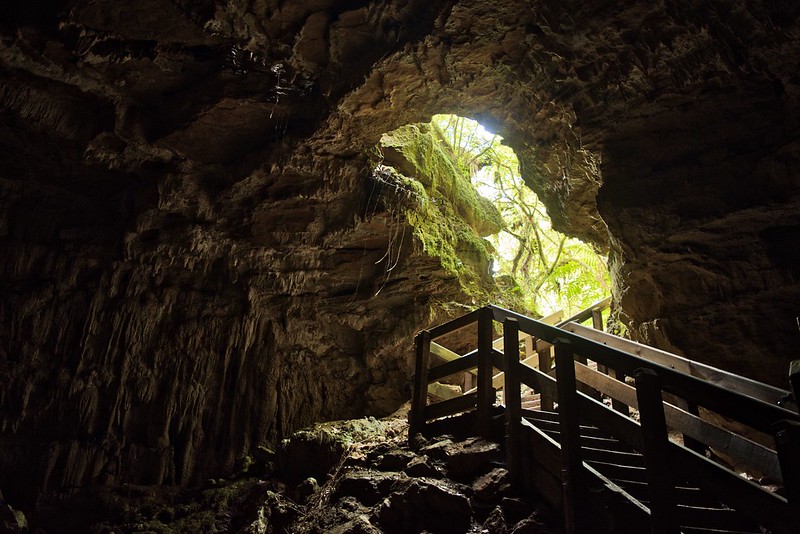 Continuing down Te Anga Rd, shortly after Piri Piri Caves, is your next stop on the list of free things to do in Waitomo – Marokopa Falls.

I think this is our favourite waterfall in New Zealand. At 35m, it was really thundering when we visited, thanks to recent heavy rain, and the wet weather must have been putting other visitors off as we were the only one there.

There’s one main lookout that sits a bit higher than the river. There’s no official track to get you any closer but it did look like there’s a well-worn path that predates the lookout.

You won’t struggle for parking at Marokopa Falls and they’ve even provided a few picnic benches along the path. However, no toilets. 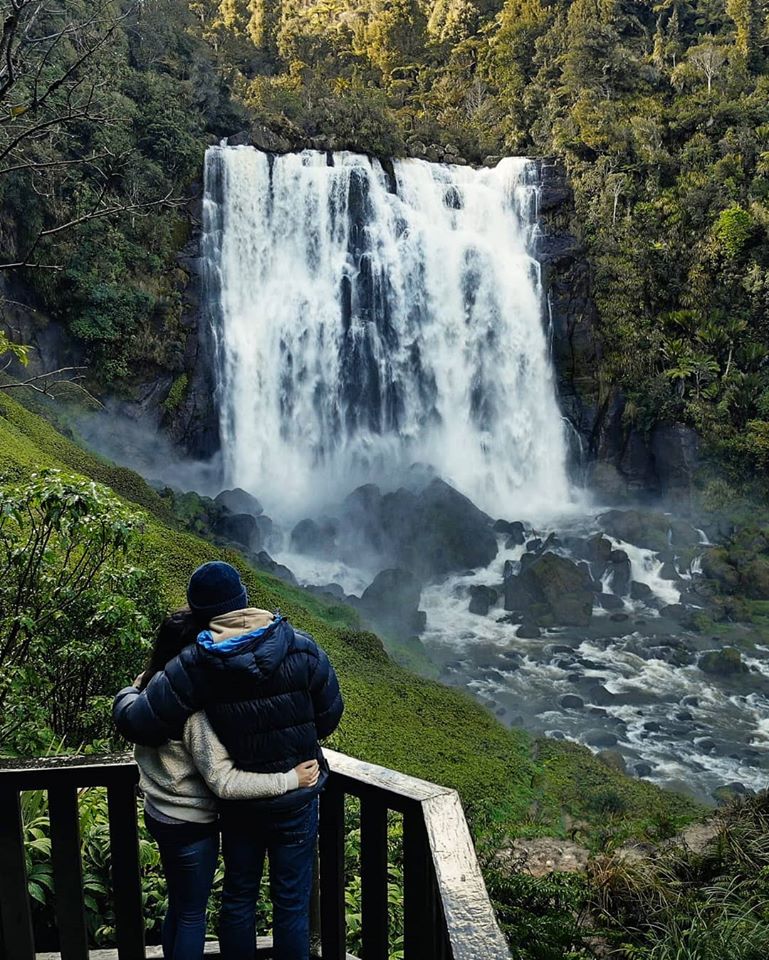 So you’ve heard of the Hot Water Beach on the Coromandel Peninsula, but what about Waitomo’s hot water beach?

Kawhia Hot Springs is the same concept, only it’s a lot quieter than its Northern sister. It’s a one hour drive from Waitomo, so it’s a little further to go but I’d say it’s one of the must-do free things to do in Waitomo.

Take a shovel, dig yourself a whole and you’ll find lush warm/hot water just below the surface. It’s important to time your visit 2 hours before low tide so you can make the most of your visit and enjoy the views! 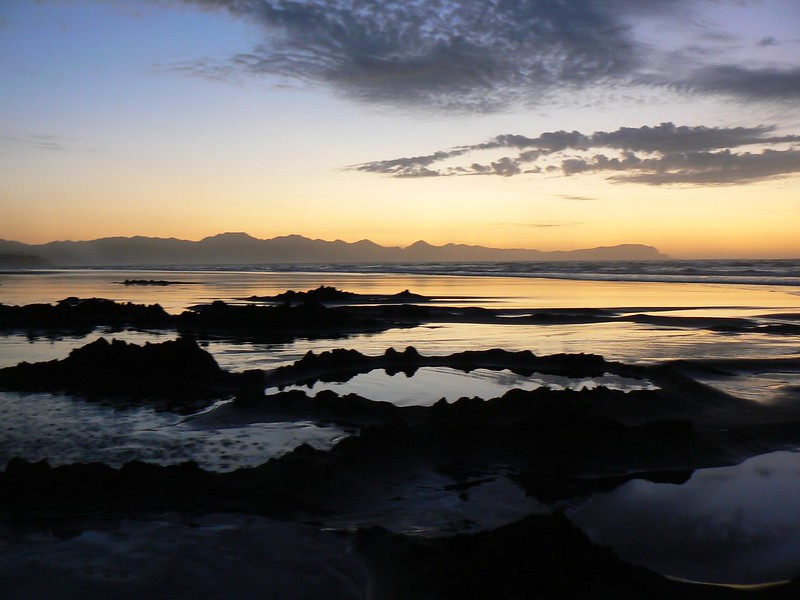 Want a quick spot to jump out and stretch your legs? The Ed Hillary Walkway is without a doubt, the most kiwi exhibition you’ll see!

It’s just 15 minutes outside of Waitomo at the small village of Otorohanga. The short walk showcases everything and anything to do with New Zealand, or Kiwiana, from the famous pavlova and Haka to Jandals and L&P.

Otorohanga is the home of Kiwiana, and you’ll find the whole town is decorated with items dedicated to it. Not sure what I’m talking about? This post explains more about Kiwiana and what it means. 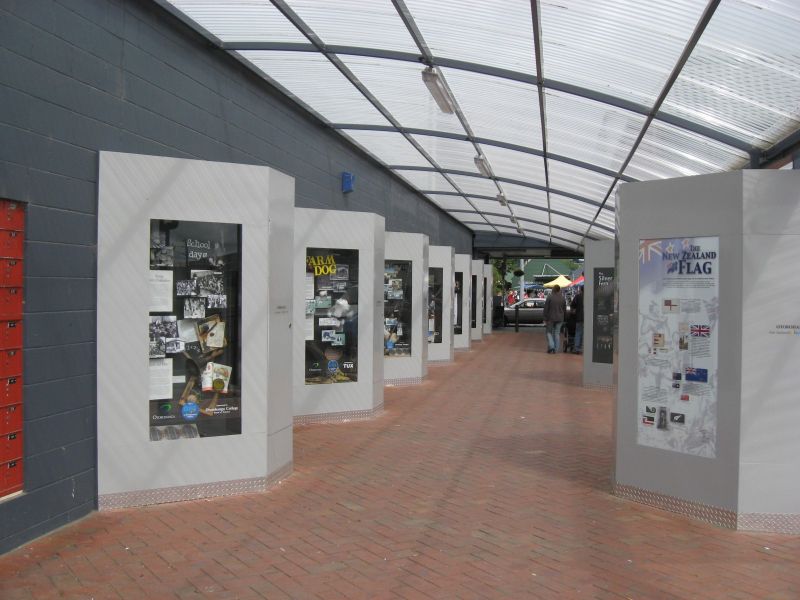 I know the number one question at the top of everyone’s list is ‘where is the sheep shearing capital of the world’… no? Ok, maybe not, but seeing as you’re thinking about it now, you might be interested to know it’s this small town near Waitomo – Te Kuiti.

15 Minutes south from Waitomo on SHW 3 is this small town and its 7.5-tonne sheep shearing statue to honour the town’s fame for the ‘sport’ (Yep… it’s a sport here too!). There are also a few other ‘Big Things’ in the area including a Weta Wall and Bronze statue of the All Black’s Colin Mead. Oh, and the Big Apple at Waitomo! 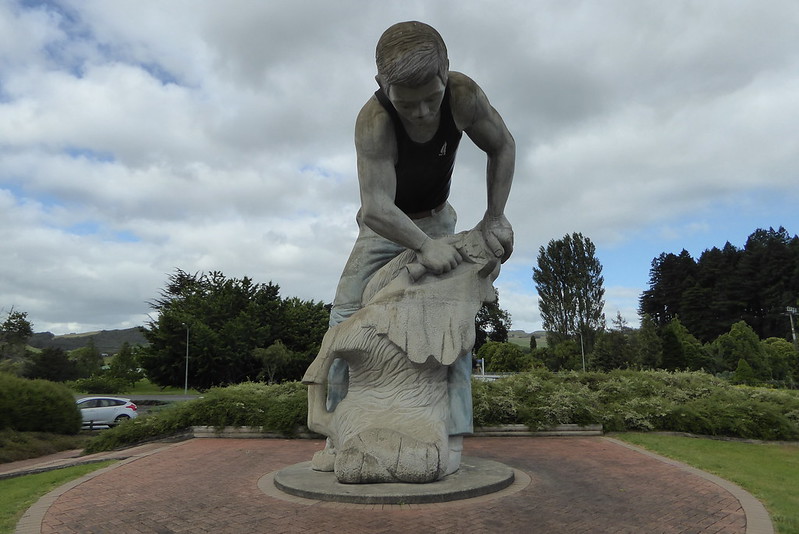 If you’re staying close to Waitomo Village, then you’ll have one of the free things to do in Waitomo right on your doorstep.

The Waitomo Walkway is a 2-3 hour hike (one way) over the lush green fields of the Waitomo area where you’ll see several of the iconic limestones formations. This walk starts opposite the Waitomo i-Site.

This is mostly a cycle trail and not one of the free things to do in Waitomo that we’ve personally done, but it looks like a really good walk to do if you’re into multi-day hikes.

Even though the Timber Trail in Waitomo is technically a cycle track, if you don’t have a pushbike you can still do all, or some, of it on foot. It’s an 85km track (one way) that goes through ancient and exotic forests, over long suspension bridges and through gorges. 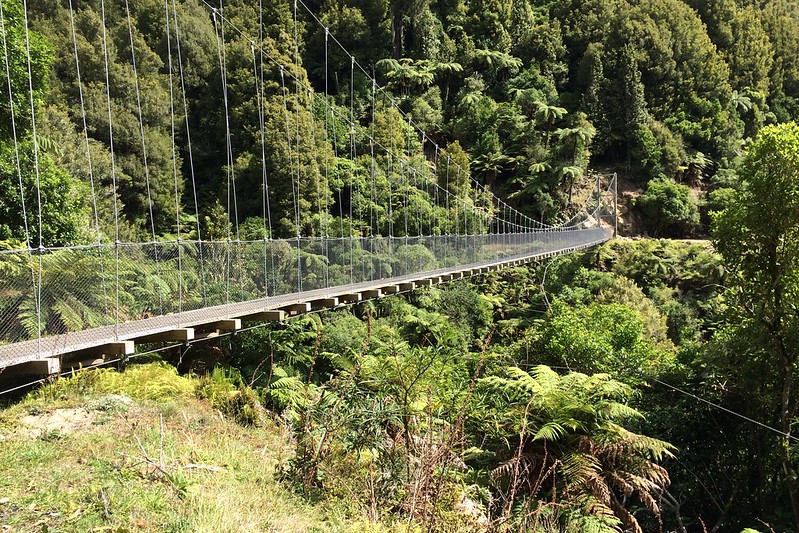 If you have a full day to spend in the Waitomo area and love quirky beaches, then you’ll want to add the Waikawau Tunnel to your itinerary. Similar to Tunnel Beach in Dunedin (South Island), Waikawau can only be accessed through a narrow hand-carved tunnel, making for some great photo opportunities!

Waikawau Tunnel fits nicely as the last of the things to do in Waitomo simply because it’s the furthest away (1 hour south). From here you can easily follow the coast to New Plymouth and Mount Taranaki. 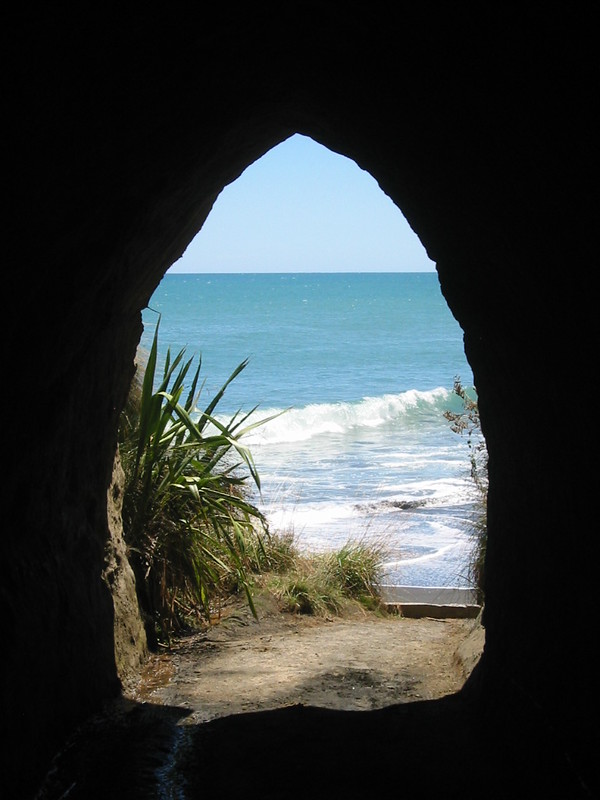 There’s a surprising number of accommodation options around Waitomo, from budget campsites to backpackers and one really unique hotel. No matter what your budget, I’m pretty sure you’ll be able to find something;

I mentioned the one really unique hotel in the area. Well, this is it. As well as their pretty standard cabins, Woodlyn Park offers guests a variety of unique and slightly bizarre options too!

Have you ever wanted to stay in a Hobbit House? How about a full-sized plane? Or maybe even a boat? If you have, then you really need to hit up Woodlyn Park located just around the corner from the famous Glow Worm Caves. 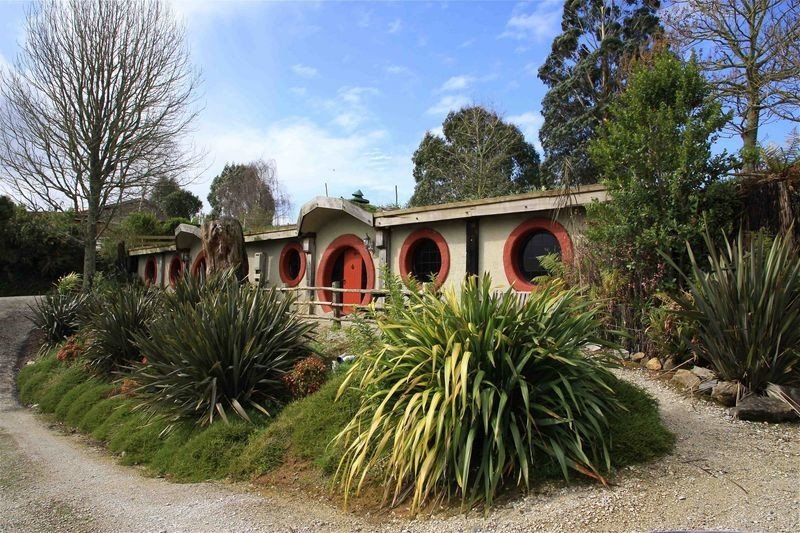 If you’ve spent big bucks on an adventure glow worm tour, you might be pleased to know there’s free camping in Waitomo too! The Waitomo Self Contained Campsite is easy to find and offers plenty of space for bigger motorhomes.

While you need to be fully self-contained with your own toilet, the cafe nearby (who owns the car park/camp) allows campers to use their facilities free of charge during opening hours. Please remember this is located near a business, so take ALL rubbish with you and be respectful of space. This is first come first served.

Like with all tourist areas, Waitomo has its own chain of Top 10. This campsite is family-friendly and offers a big range of options from unpowered and powered sites to motel rooms and fully self-contained cabins. In the summer it’s best to call ahead to make a booking to avoid disappointment.

How many of these free things to do in Waitomo have you added to your list? Personally, we need to head back to that area to do more of the Waitomo walks. 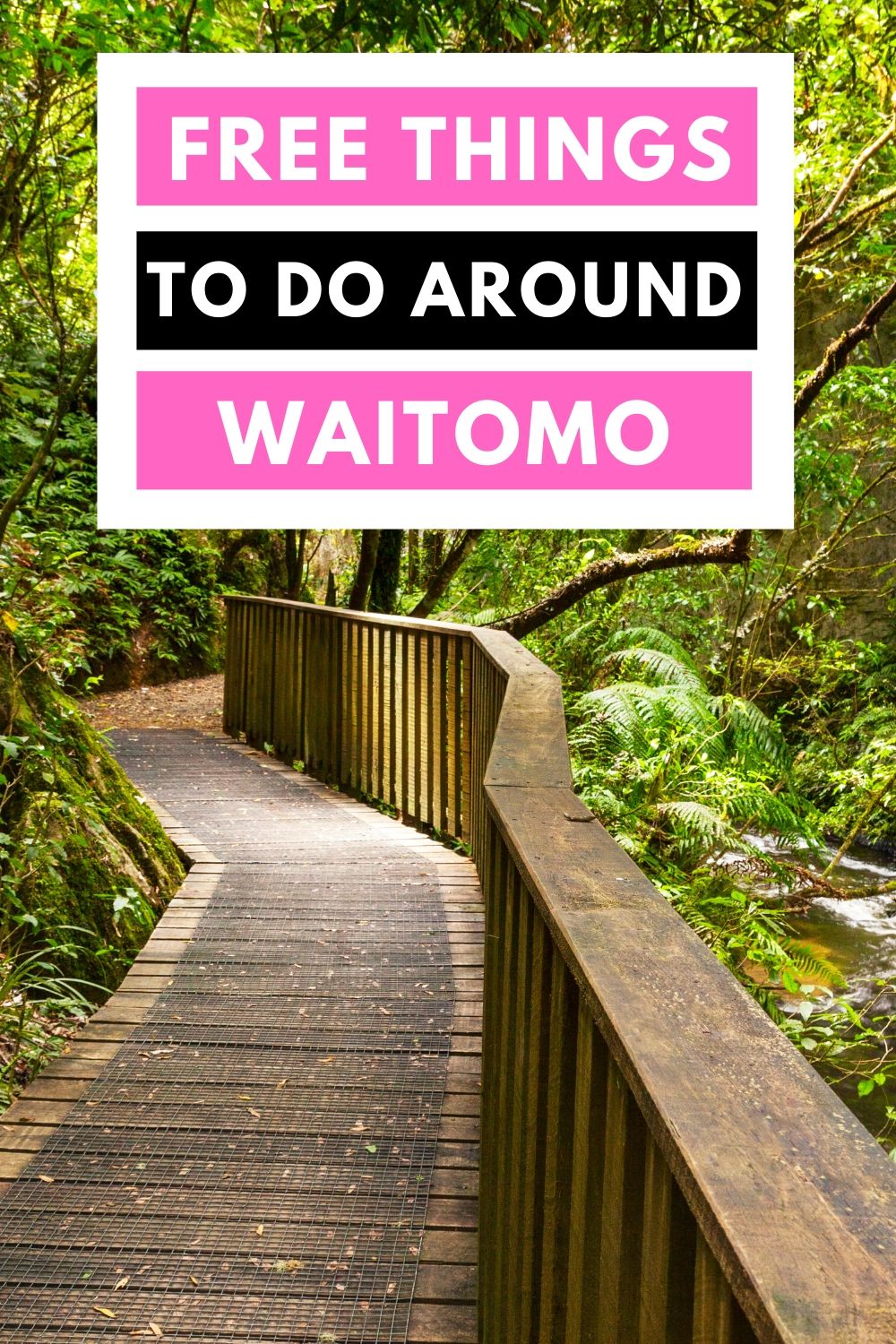 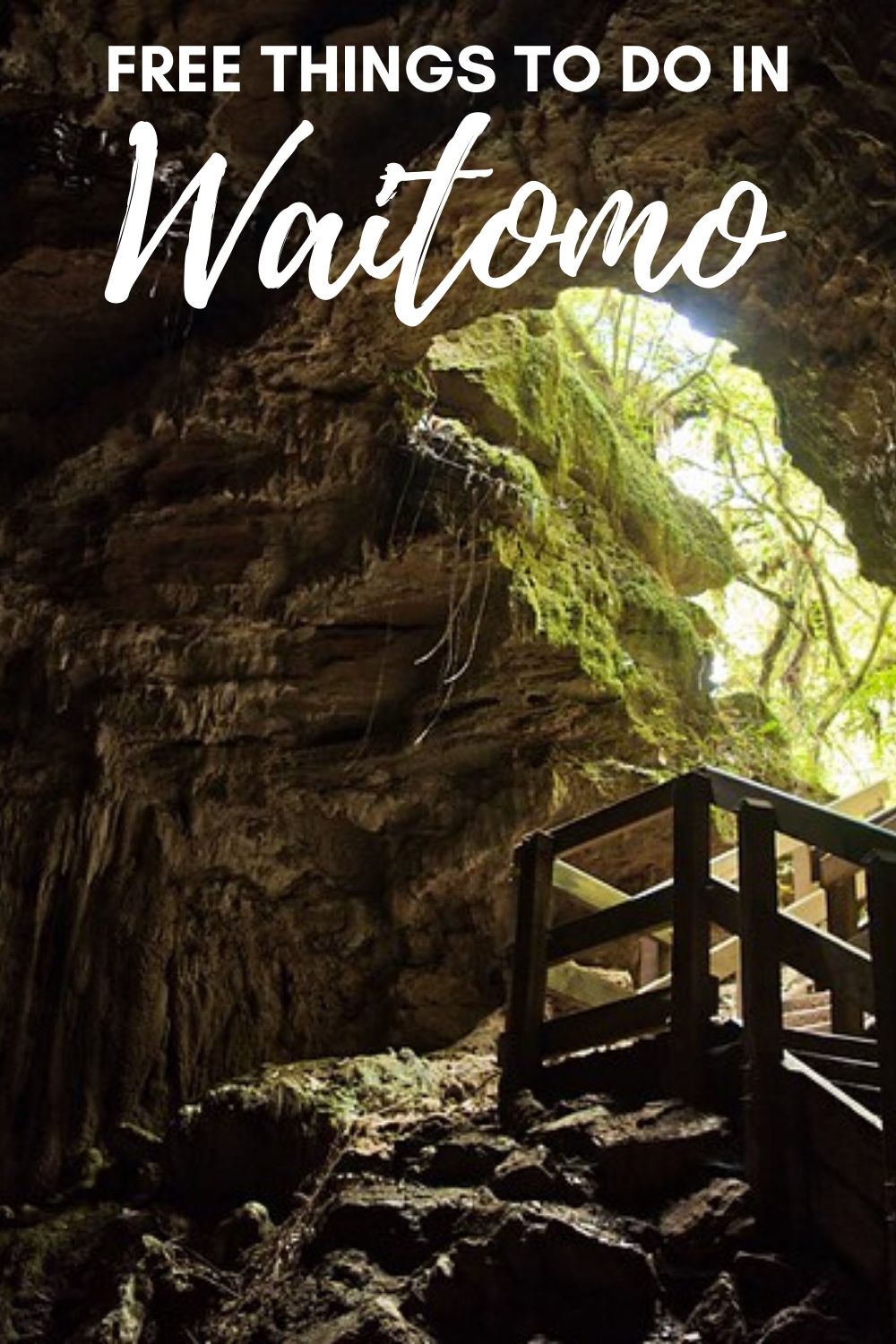 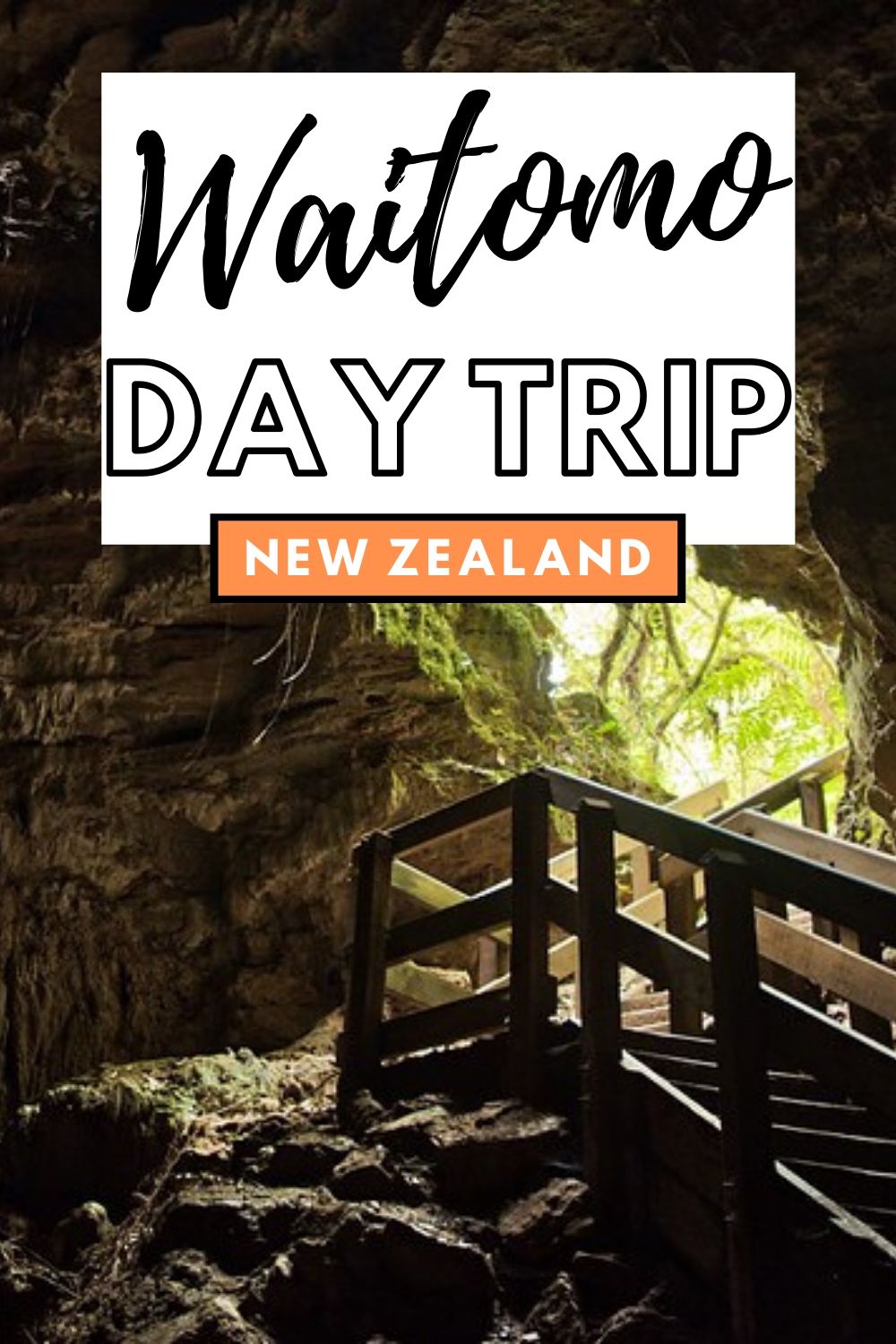 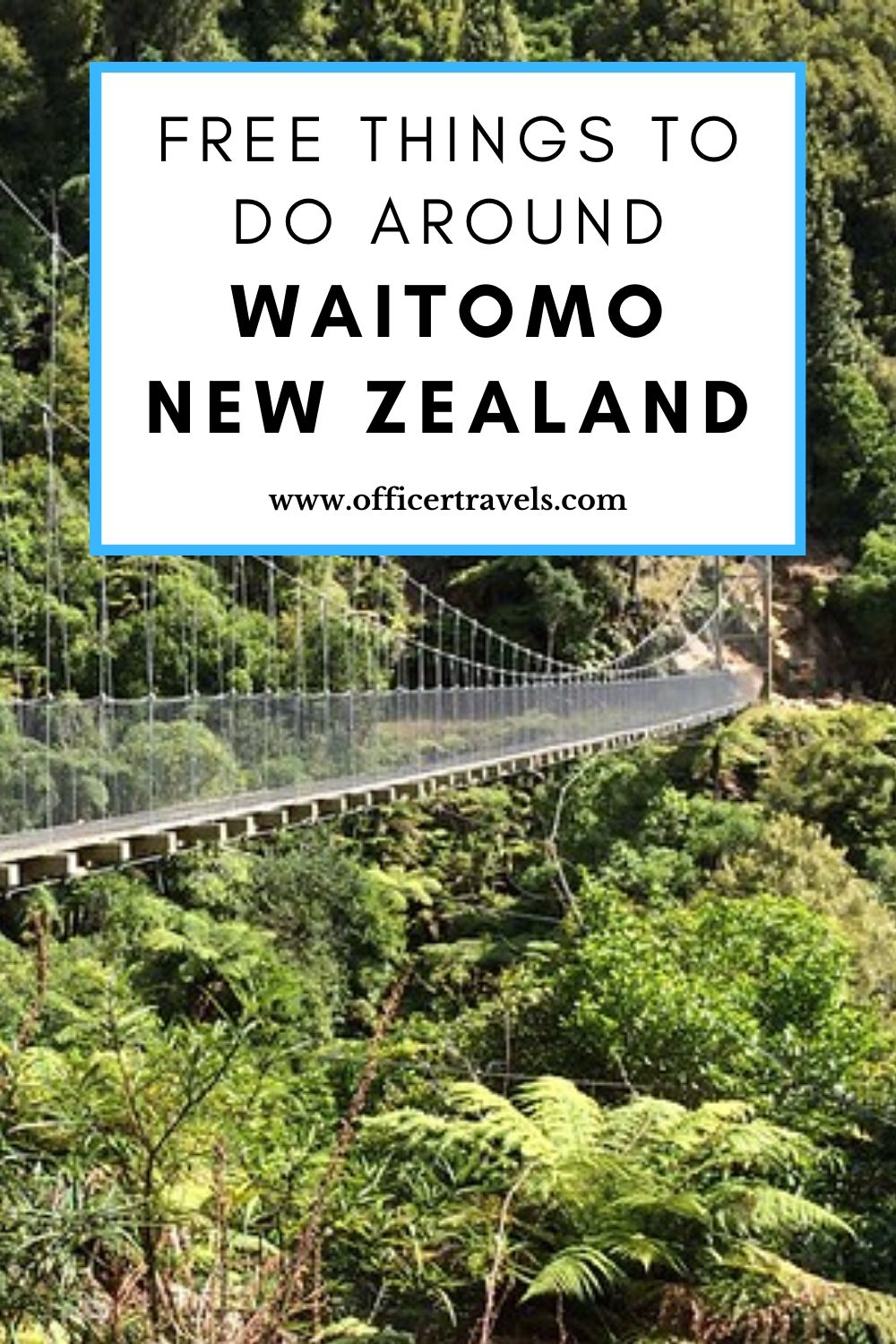 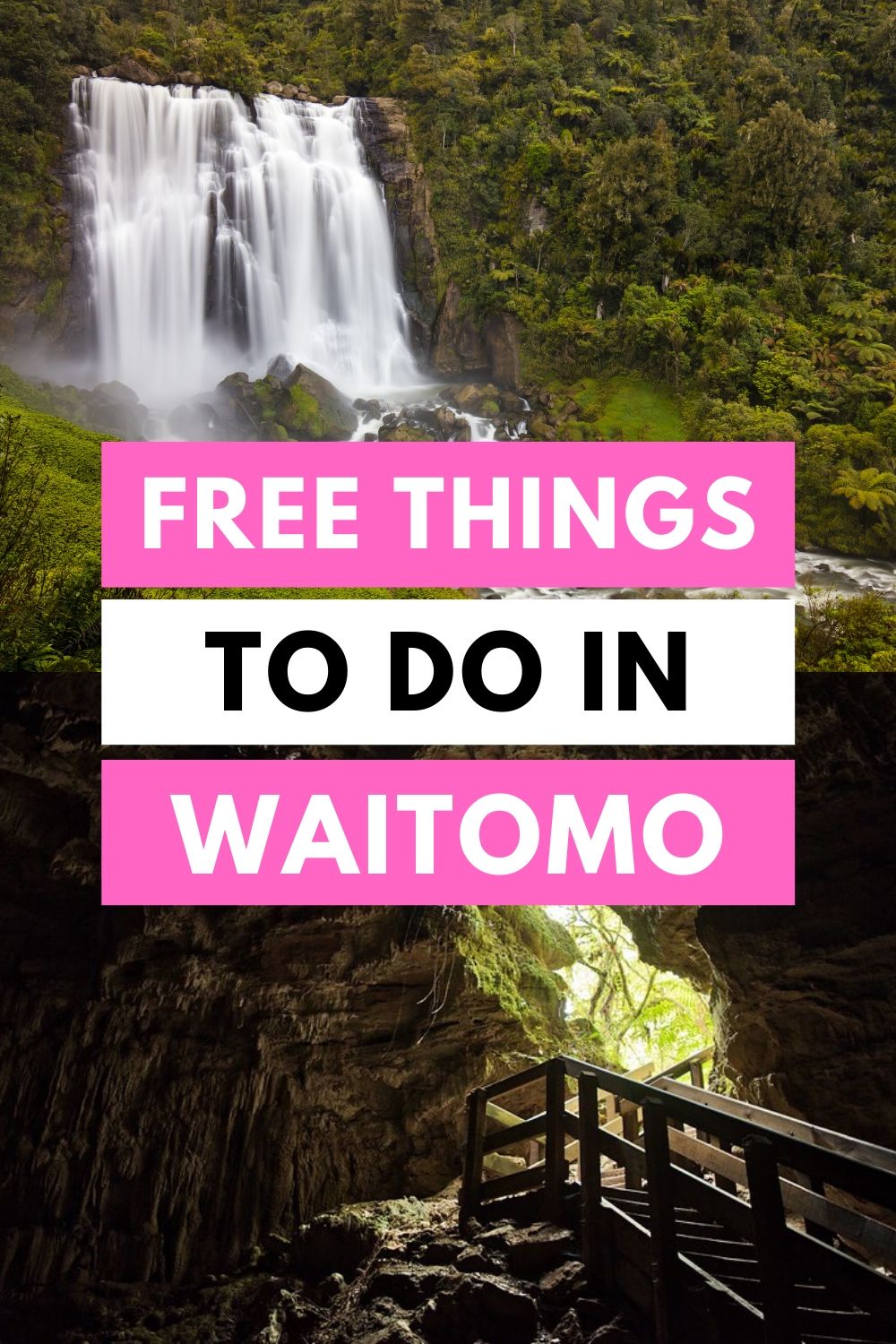