Chances are you hadn’t heard about Mahia Peninsula before now, it’s ok we hadn’t either, but don’t worry! We’re going to tell you all about this hidden gem and why we think you should stop at Mahia Peninsula on your way to Napier!

The Mahia Peninsula is 3 hours North of Napier or roughly 2 hours South of Gisborne. It doesn’t particularly stand out on maps and it never crops up in New Zealand ‘to-do lists’, so how did we come across it?

I guess you could say we suffer from major FOMO. It’s very rare for us to skip driving down a peninsular, even if it doesn’t seem to have much there, because what if it does? 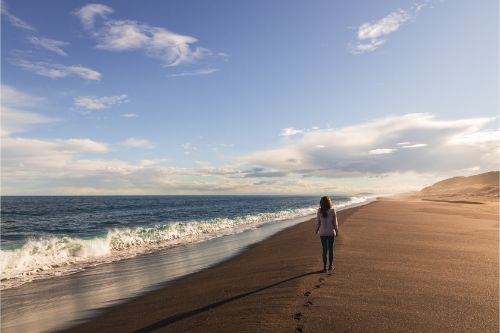 Me walking down a beach near Mahia Peninsula

Sometimes the detour doesn’t pay off but this time it did. This time we stumbled across the sleepy little coastal town of Mahia Peninsula, one we walked through and didn’t see a single person, or even a car on the road.

The only sign of life was the little fishing boats on the water and speed boats heading out to sea. It seemed to be the village that the tourists left behind, because while there were a couple of freedom camps we were the only ones there; complete bliss after struggling to find spaces in Gisborne!

On the surface, it looked like a village without much going for it, unless you were retired or had a fishing boat. You’re probably even considering clicking away now thinking “sleepy little coastal towns aren’t for you” but wait. Sometimes you have to dig a little deeper and explore the gravel path less travelled…

It’s down one of these very roads that we remembered exactly why we never skip a peninsular. All it took was turning one corner and the whole coastline opened up to us, showing all its glory under the morning sun.

White cliffs with tumbling green hills on one side and turquoise blue waters crashing against the other. When the sun hit it at the right angle, it looked like a scene straight from a postcard. 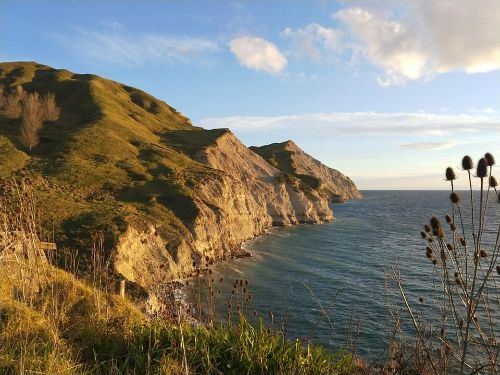 Cliffs of the Mahia Peninsula

We continued further up this road and it leads us here, the Mahia Peninsula Scenic Reserve. Although I admit, we used Wiki Camps to find it once we arrived in Mahia and knew we wanted to stay a little longer – luckily there had been just a couple of other tourists smart enough to venture down the Mahia Peninsula too.

The Mahia Peninsula Scenic Reserve is a big stretch of forest in the middle of farmland high on the mountainside, inside is a 4.5km walk that twists and turns through the woods, under an ancient tree canopy and across several streams.

To get there you can either leave your car at the beach and walk the gravel road that winds through the fields and dances with the cliffs; will take you roughly an hour, or you can drive and park in the small car park just next to the reserve.

Our camper was too big for the gravel road so we got comfy in our boots and walked. It didn’t turn out too bad, the views were breathtaking, especially as the sun found its way through the clouds. I’m not sure the cows or goats really appreciated us being there though haha. 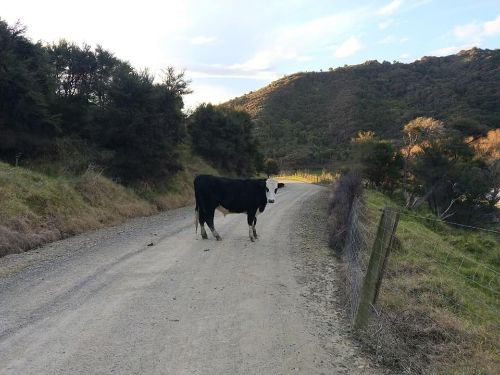 One of the Mahia Peninsula residents – not sure if she was happy to see us or not?

North Island Hikes You Have to do While You’re Here

Once inside the reserve, we were faced with a choice; left or right? Left headed down some steep looking steps whereas the right track led up a steep hill towards a lookout.

We opted to go right, wanting to see the lookout early while the sun was still shining – something that isn’t guaranteed to last long during the winter in New Zealand.

It was obvious this was once a well-walked path but it hadn’t been visited in a while. Maybe the recent rains put people off venturing this way, or maybe it was more of a summer past-time for the locals. Either way, we were the only people in the reserve, the only noises around us were those of the wind blowing through the treetops and birds singing their winter songs. After a few days in the bustling city of Gisborne, the quiet was almost deafening.

The Mahia Peninsula Scenic Reserve walk is 4.5km and should take roughly 2 hours to complete, depending on how many times you stop to take photos of ferns, or the streams, or the tiny birds… you can probably guess it took us a little longer, but what’s the rush? 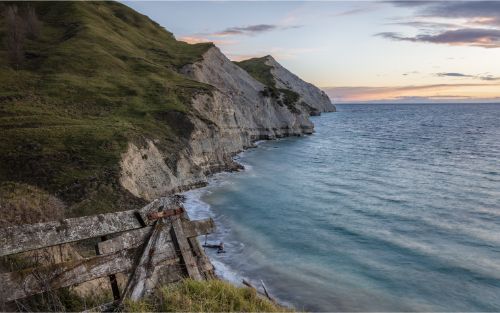 The White Cliffs of the Mahia Peninsula

At some point during the walk the path criss-crossed the stream 9 times (but really, who’s counting), after the rain they’d had recently it was flowing well, so each crossing seemed to get trickier, almost like it was testing our ability to stay dry and laughing at us when we failed… I’ll let you guess how many crossings I managed before I ended up with soggy feet for the rest of the day. Hint; not many!

Keep your eyes open for wildlife while you’re in the Mahia Peninsula Reserve. There’s an abundance of birds nesting as well as possums – I know they’re a ‘pest’ in New Zealand but they’re too cute to not enjoy seeing in the wild.

As we reached the end of the track it became clear we’d made the perfect choice by turning right at the start. The last stretch was very muddy and very steep, it was a hell of a lot easier to go up than it would have been to come down – without sliding down on our bums anyway! 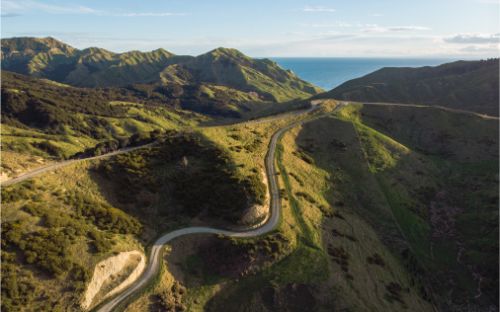 Quick things to know about the Mahia Peninsula Scenic Reserve:

How to Have an Epic Time at Mount Maunganui

Where to camp on Mahia Peninsula

It might be a small village but the Mahia Peninsula has one of the best free campsites we’ve stayed on so far in New Zealand.

This camp is right on the edge of a lake with a great view at sunset and clean toilets, the only downside is the pitches are grass so it would be easy to get bogged in if you got caught in a storm, but that’s one of the sacrifices you make for a scenic nights sleep I guess.

You could leave you van at this campsite for the day while you did the scenic reserve walk but it’ll add another hour onto your walk (and another 8.8km each way).

There’s also a couple of free unsigned camps on the other side of town, again these ones are grass but they’re right next to the beach and offer a great view for sunrise.

If you’re wanting a powered site for the night, there’s one holiday park on the Mahia Peninsula. Details for which you can find here. I’m pretty sure it was closed while we were there so it might only be a summer campsite. Check the link for the most up-to-date details.

Other things to do nearby

Just before you reach the Mahia Peninsula you’ll pass Black’s beach at Nuhaka, you have to stop off here. As we drove past we saw white cliffs, black sand, a rainbow and an empty beach; we knew we had to explore it and when we did it, rocketed into our list of favourite beaches in New Zealand. It almost got a blog post of its own.

What was supposed to be a quick stop turned into a couple of hours chilling on a beach we had all to ourselves. Blacks Beach is unique in so many ways, from the colour of the sand – not really black sand, but not ‘normal’ sand either – to the illusion the waves caused as they crashed against sand. 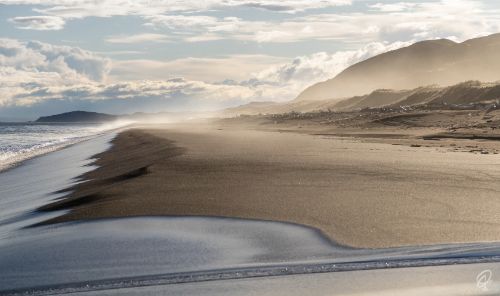 Blacks Beach, near the Mahia Peninsula

The illusion is very hard to put into words and was even harder to capture on camera so I’ll try and describe it;

Imagine the beach just drops away to a 45’ angled dune, right where the waves crashed into it. When we stood at the top, the way the water hit the dune made it appear like none of it was even moving.

We could see the wave curl, we could hear the waves crashing, we could see the foam running over the top of the dune and on a particularly big wave we could even feel the rumble underneath our feet, but it didn’t look like the waves were really moving up the dune like we knew they were. When we stood further back, all we saw were the waves rolling in then nothing.

It was almost like being stood on the edge of the world. Bizarre in so many ways but fascinating, especially being able to actually feel the waves crashing, I don’t recall ever having that sensation before and it’s one that will certainly stick with me.

Another thing to do on the Mahia Peninsula is to visit the Mokotahi Hill lookout. This is a 10 minute walk from the small car park and gives you great views of Mokotahi Hill and the little bay. If you’re planning to do the reserve walk, leaving your car here would be a good option. You then have a short walk through town and along the coast before you reach the gravel road leading up to the reserve. It adds approx. 1 hour 15 minutes to your walk time.

The Mahia Peninsula is a classic example of why we love to road trip a country instead of joining hop-on hop-off tours or rely on public transport. They very rarely pass places like this so imagine just how many New Zealand hidden gems you miss out on. With a road trip, we’re free to explore all those little corners that nobody really talks about. If they turn out to be nothing special, at least we went and saw it for ourselves.

What has been your favourite unexpected place on a road trip? How did you come across it? Let us know in the comments or join us over on twitter! 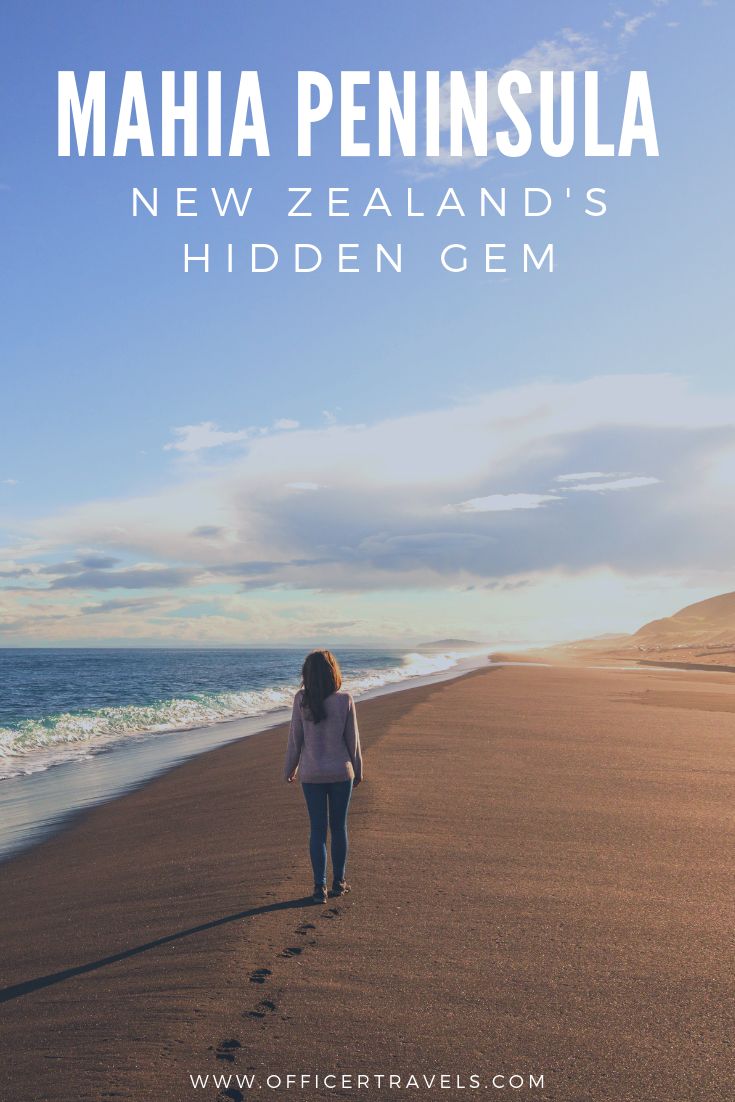 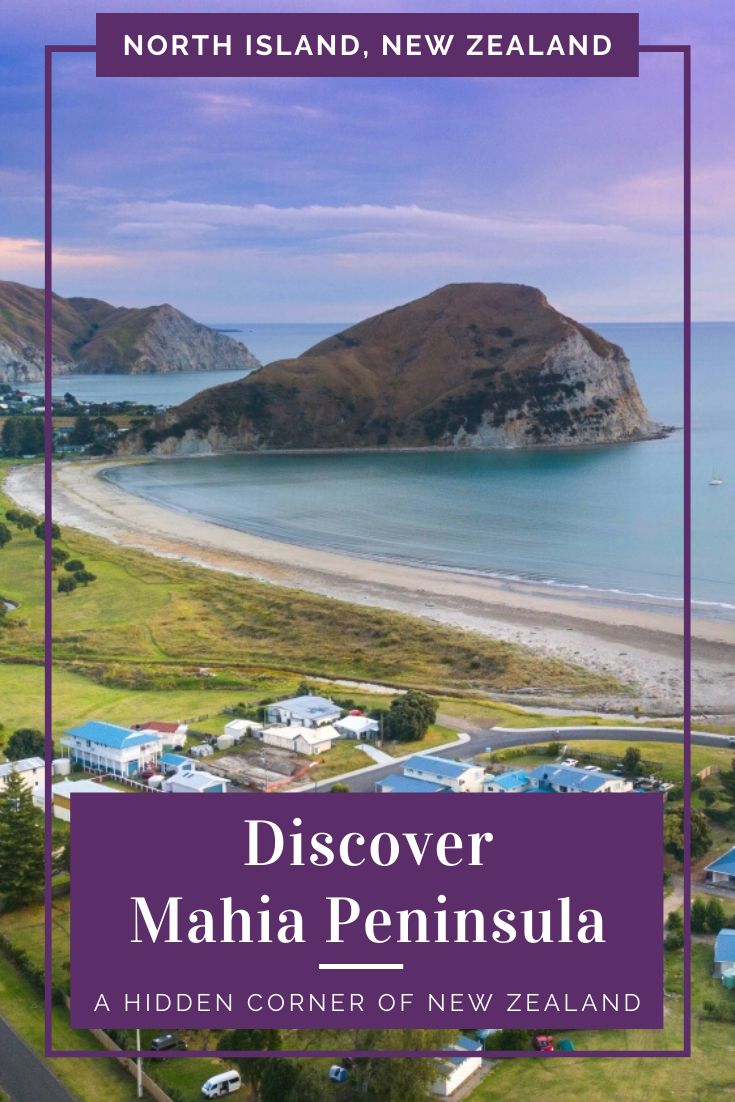 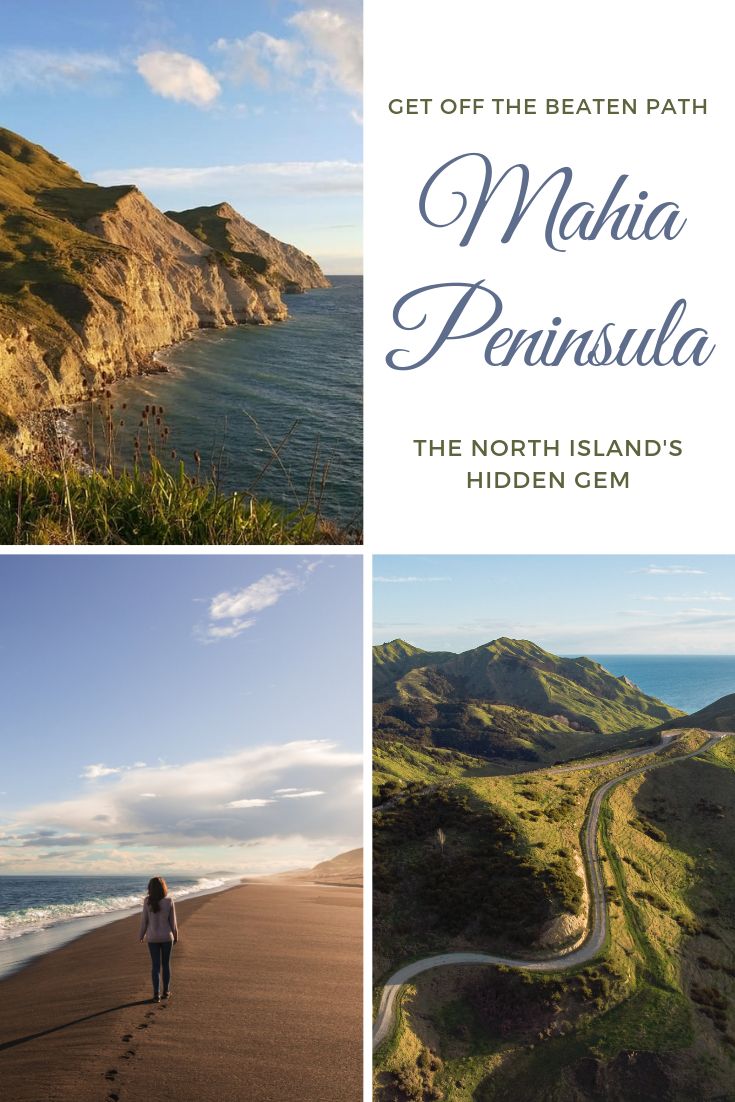 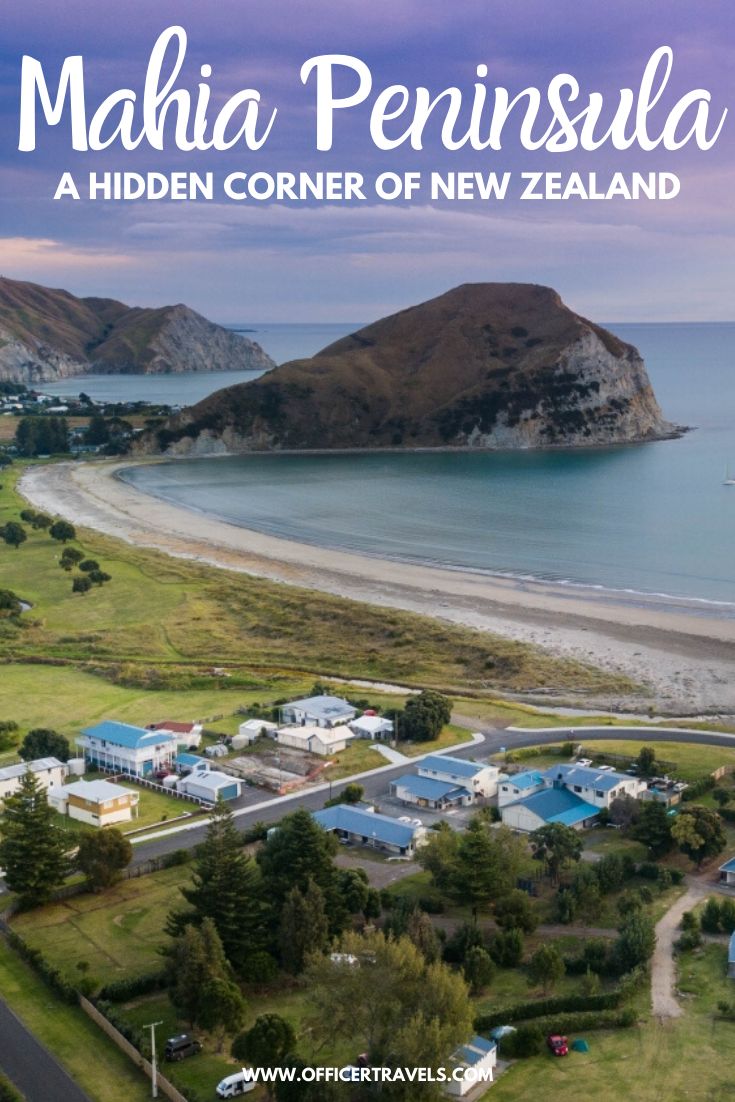 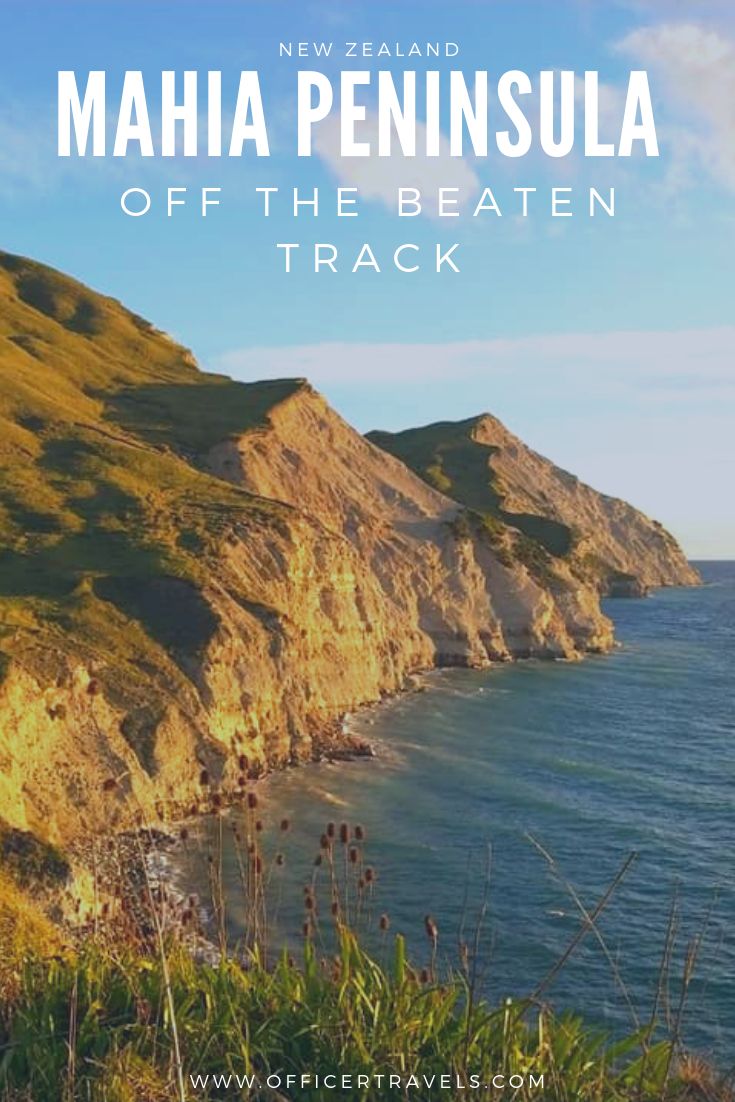