The best way to see the city

Moving to a new city is always exciting. Moving to one that has plenty of green space is even better!

It’s no secret that Dec and I aren’t big city lovers, it’s important for our sanity that a city has at least one decent park for us to get lost in. Luckily, Auckland has gardens, volcanoes, coastal views and so much more!

In the short time we’ve been here we’ve already racked up a few favourite places and it just so happens that the Auckland coast to coast walk will take you through every.single.one of them.

If you’re looking to explore Auckland by foot, this is a walking track for you!

Suitable for – Everyone. This walk can be broken down for anyone with lower fitness.

Facilities – Plenty of toilets, water fountains to refill bottles and cafes along the route. 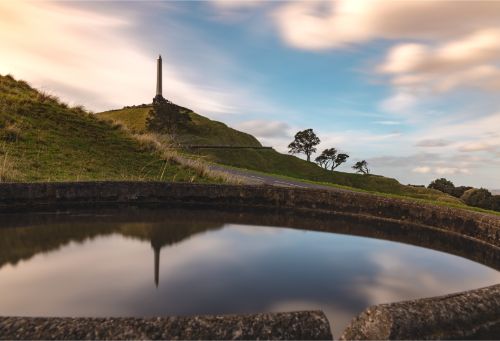 We used Onehunga as our starting point and walked back to Auckland Harbour.

From Britomart station, you can either get the train to Onehunga (like we did) or you can get the bus which takes slightly longer, both will cost you $3.45 with your AT HOP card. From the station, it’s a fairly easy walk through an industrial site to Onehunga Bay Reserve.

Once we reached the reserve we decided to take the short walk to the reclaimed beach to make it a real Auckland coast to coast walk. It isn’t a particularly beautiful beach but the views across to Ambury regional park were a great start to the day.

Set off before midday. We made this rookie mistake and ended up doing the walk in two halves, mainly because we took so damn long taking lots of photos.

Check Out The Best Ways To Get Into Auckland From The Airport! 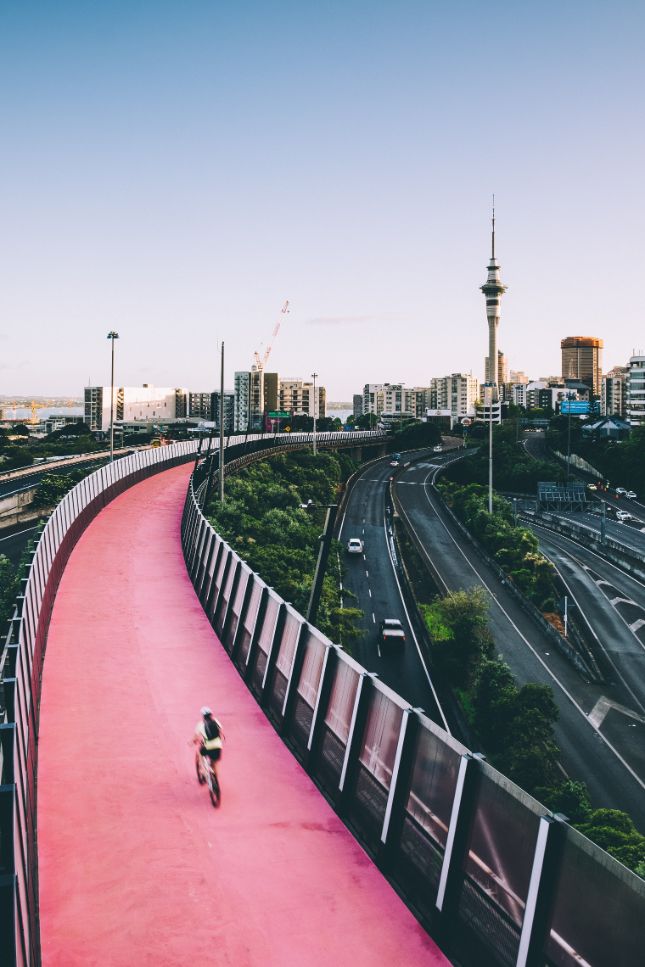 First stop of the day – One Tree Hill

After leaving Onehunga behind we meandered through sleepy residential streets and local parks to find ourselves at the base of One Tree Hill; A 182m tall volcanic peak. It would be our first volcano climb of the day and while I wasn’t sure I was ready for such a steep climb, I was excited to see what views it had in store for us from its summit. 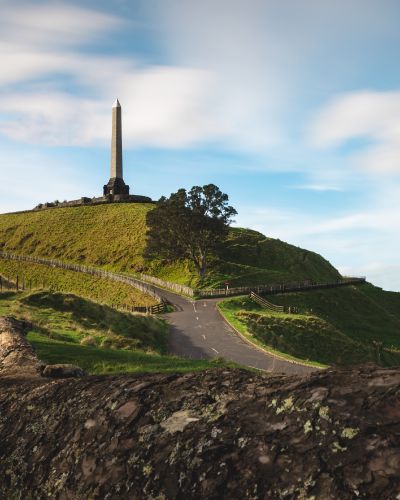 While there is a road that leads all the way to the top, along with a plentiful carpark, this is from days gone by where people, cars and cyclists alike would race up the hill for the best views. Cars are no longer allowed to the top, meaning I could focus more on my breathing and not passing out, rather than dodging cars.

I’m not going to beat about the bush, we spent way longer here than we anticipated. It turned out to be a photographers paradise and what should have been just ‘a quick pitstop’, turned in to a good hour or two. It’s here we started to realise we’d probably run out of daylight (or memory card storage) before we reached the end of the Auckland coast to coast walk.

Pro tip – You can walk down the opposite side of One Tree Hill via a small public track through the fields, rather than retracing your steps back around the road. Google maps doesn’t show this, but it’s there. Just look for the little wooden gate in the wall.

Highlight of One Tree Hill

Sheep! Haha ok no, sheep weren’t the highlight but the views from the top certainly were. From the 360’ view, see how many of Auckland’s volcanoes you can count! 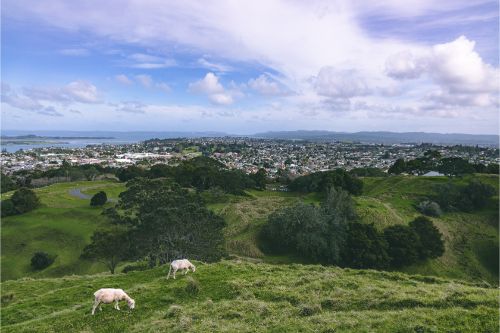 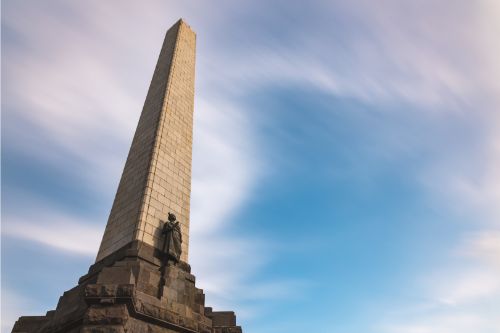 By now we’d already come to the realisation that we were doing one of the best walking tracks Auckland had to offer, and we weren’t even halfway through it. Cornwall Park and One Tree Hill interleaf seamlessly so if it wasn’t for the big gates and welcome sign you wouldn’t even know you’d crossed into a new space.

Cornwall Park is one of Auckland’s gems. At 425 acres it’s full of history from all across the area. You could honestly spend an entire day here and we fully intend to go back and do just that. Instead, we spent a while observing the photography exhibition outside the bistro and walking through the tree-lined paths.

I stalked a pheasant for a while, unsuccessfully trying to snap his portrait – It feels weird being on the other side of the world seeing relatively ‘English’ birdlife after two years in Australia where Cockatoos and Kookaburras are the locals.

Tree-lined paths and the perfect picnic spots reminded us of our favourite walking places in England. It was nice to have a little taste of home after more than two years away. 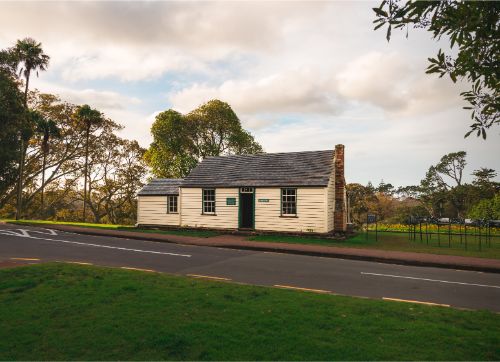 This is where our fears of losing daylight became a very real possibility. Believe it or not, it was already fast approaching 4pm by the time we reached the other side of Cornwall Park. Light was fading fast and we really wanted to reach Mount Eden in time for sunset – not the original goal. We’d hoped to be home by now watching the sunset over the harbour!

A brisk walk through the quiet streets of Epsom had us at the base of Mount Eden just as golden hour hit. From this side of Auckland’s most famous volcano, the first part of the track is a series of steep steps – steps that almost killed me after already walking for 4 hours.

We were then faced with a decision; follow the road that wound around and up, a route that could take a further 30 minutes and possible mean we miss sunset… or scale the muddy side of Mount Eden, almost max out my lung capacity, break my ankle but get there in time for sunset.

Guess which one we chose.

10 minutes later we were gasping for breath (who am I kidding, Dec was fine) at the top of Mount Eden, in complete awe of the views and massive crater that greeted us at the summit. I had no expectations to what a dormant volcano should look like, but this wasn’t it.

Mount Eden, also called Maungawhau, is taller than One Tree Hill at 169m tall. In most Auckland itineraries it’s listed as the #1 must do and I can’t disagree with that, even if it is one of the steeper walking tracks Auckland has to offer. The road and parking spaces suggest to me that some days you can drive to the top, or maybe hitch a lift, this day the road was blocked off though.

This was where we cut our Auckland coast to coast walk in half. Not only did we run out of daylight, we also completely filled our memory card! We Chose to take a shortcut back to our accommodation in the city, but keep reading because we came back to finish the route! 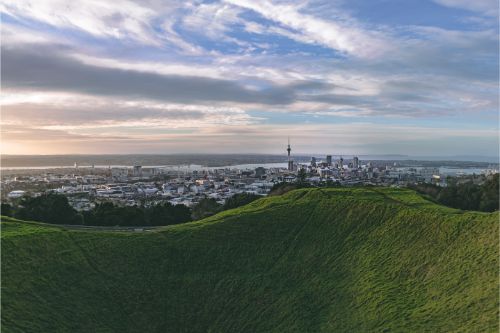 Without a doubt it would be seeing the huge unexpected crater at the top. I’d seen photos of the Mount Eden summit before but they don’t do the depth justice. The views are pretty epic too but they’re overshadowed by the immense feeling of wonder I had while looking into this dormant volcano. 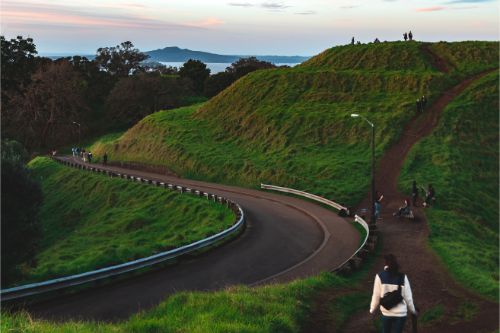 After a short walk through the outskirts of Newmarket we reached Auckland Domain, the penultimate final attraction of the Auckland coast to coast walk. Domain park is Auckland’s oldest and at 75hectacers, it’s also the largest in the city.

You’ll not just find tree-lined paths and perfectly manicured lawns here like in many city gardens, there are also two winter gardens to explore, a fernery, the Auckland War Memorial and Museum as well as a cute cafe that looks out over a pond.

It’s again another park that deserves at least a couple of hours to explore fully. The trees here are so big and ancient looking that they reminded me of Game of Thrones or Lord of The Rings. Scattered throughout the park you’ll find explosion craters from an ancient eruption of Pukekawa volcano and if you climb to the top of Pukekaroa Hill you’ll find a memorial for the first Maori king. 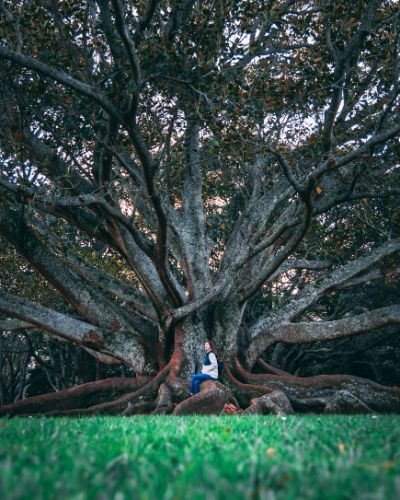 Seeing a cities war memorial is always very humbling. They’re always so similar yet vastly different. The fact this one also doubles as the city museum is a nice touch too. However, the most memorable thing about Domain for us was how unique the trees are here. They’re just so huge, twisted and old! Nature will always top architecture for me. 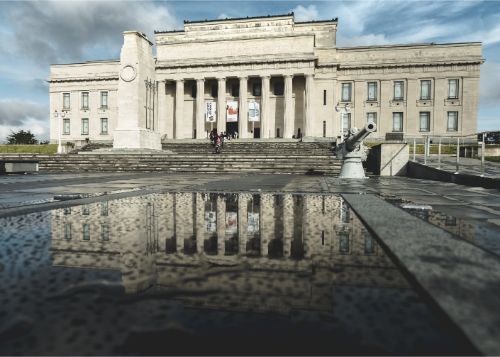 17 minutes from Domain is Albert Park, the most central park in Auckland, exactly what you expect from a rural park and one who walks around Auckland will become familiar with. Albert Park reminded me a lot of the parks in London, it was just missing the squirrels. When the flower beds are in bloom I imagine it is absolutely stunning because it’s beautiful even in the winter. Like with all city parks you’ll be in the presence of a great mix of people, from students and business people on their breaks to tourists, yoga enthusiasts and fitness fanatics. There’s a really good atmosphere to this park that has you almost forgetting your in the middle of a city.

As you’d imagine from a coast to coast walk, this one ends by the sea at Auckland harbour. If you’ve timed it right, you could end up watching an amazing sunset over the water, or grabbing a bite to eat at one of the many waterfront restaurants. Either way, being here means you just completed one of the best day walks Auckland has to offer. If it’s nearing the end of the day, hang around to see ‘The Cloud’ and Sky Tower light up, Dec likes to call the Cloud a poor man’s opera house… let us know what you think haha. 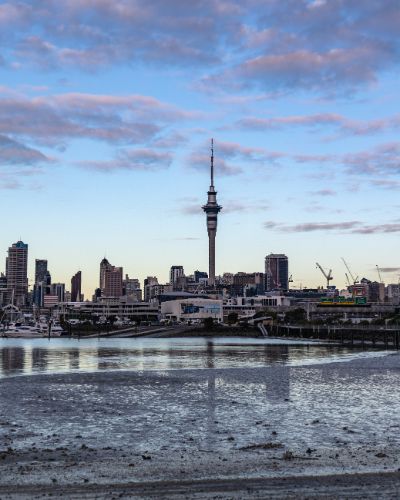 If you haven’t quite had enough of exploring Auckland by foot, from the Harbour you can add on an additional 45 minutes by walking to Westhaven Marina. This is another of the Coastal walks in Auckland but it makes a nice addition to the coast to coast – I mean, what’s another 3.5km when you’ve already walked over 16km?

The Harbour to Westhaven walk winds alongside the waterfront past bustling eateries and docks full of boats. There’s really good views of both the bridge and the city from here, especially at sunset.

There we have it. One of the best walks in Auckland city, it’s a corker isn’t it! If you’re concerned about the distance or would rather break it into smaller walks that’s completely doable. Each of the parks have train stations nearby, making them really accessible from the city if you don’t want to do a big walk.

Have you done the Auckland coast to coast walk or any other of the walking tracks in Auckland? If you’ve got recommendations, drop us a comment or head over and join in the conversation on one of our socials! 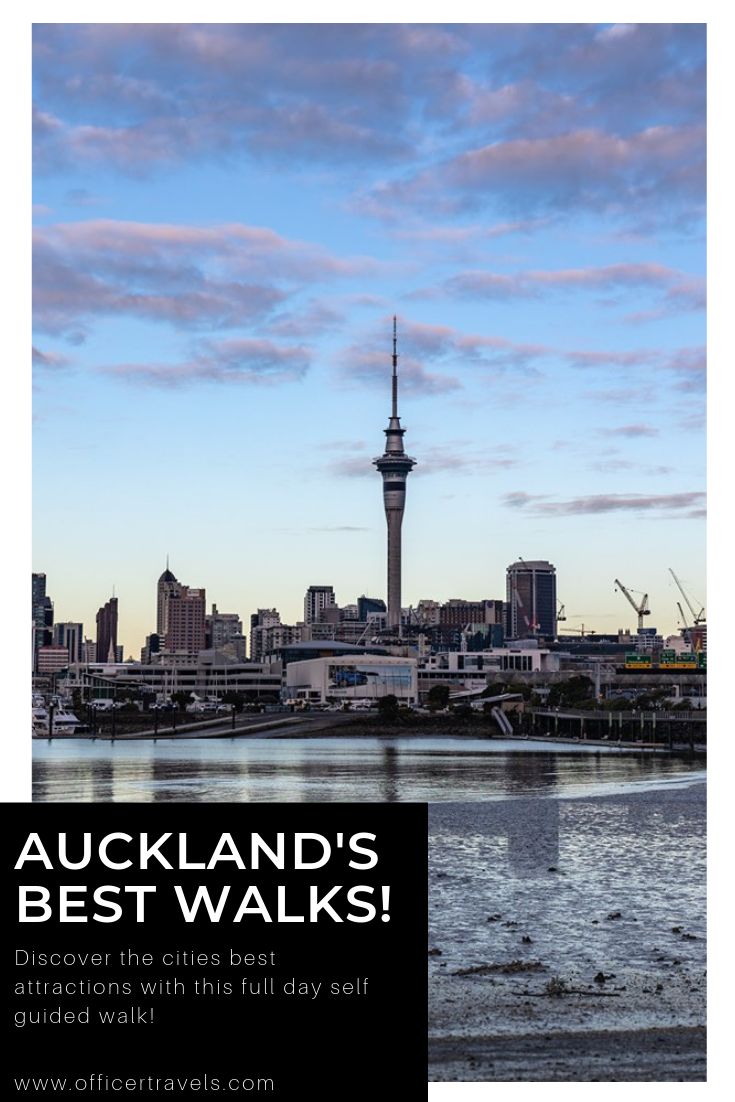 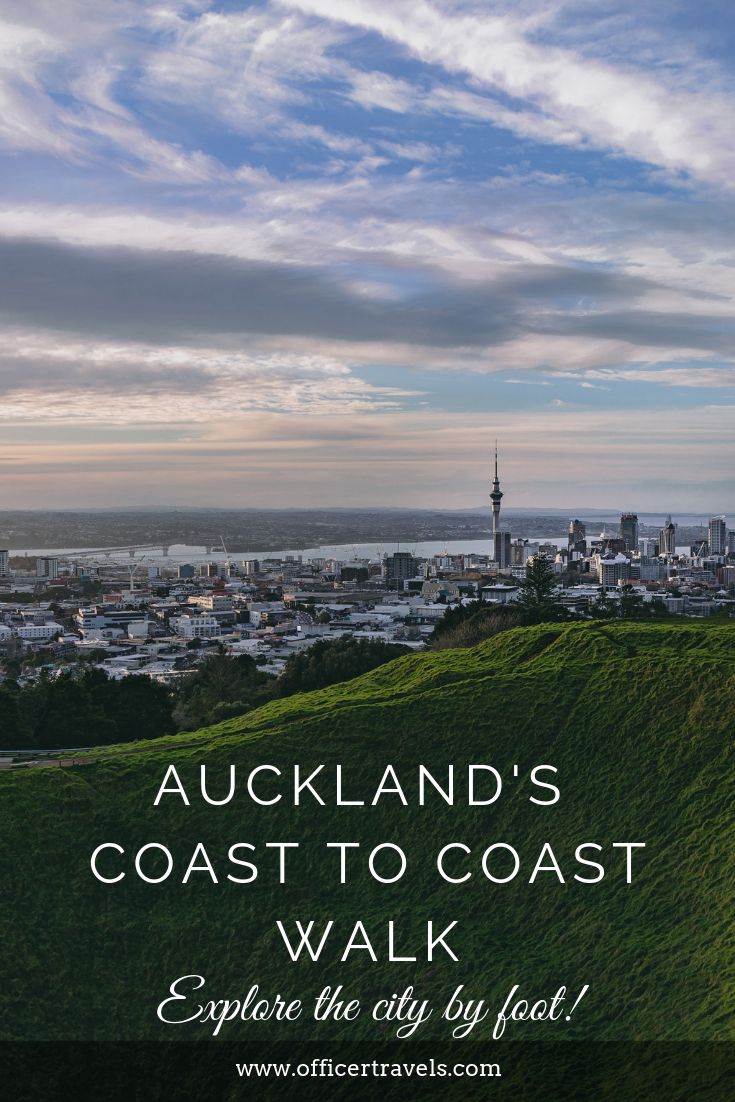 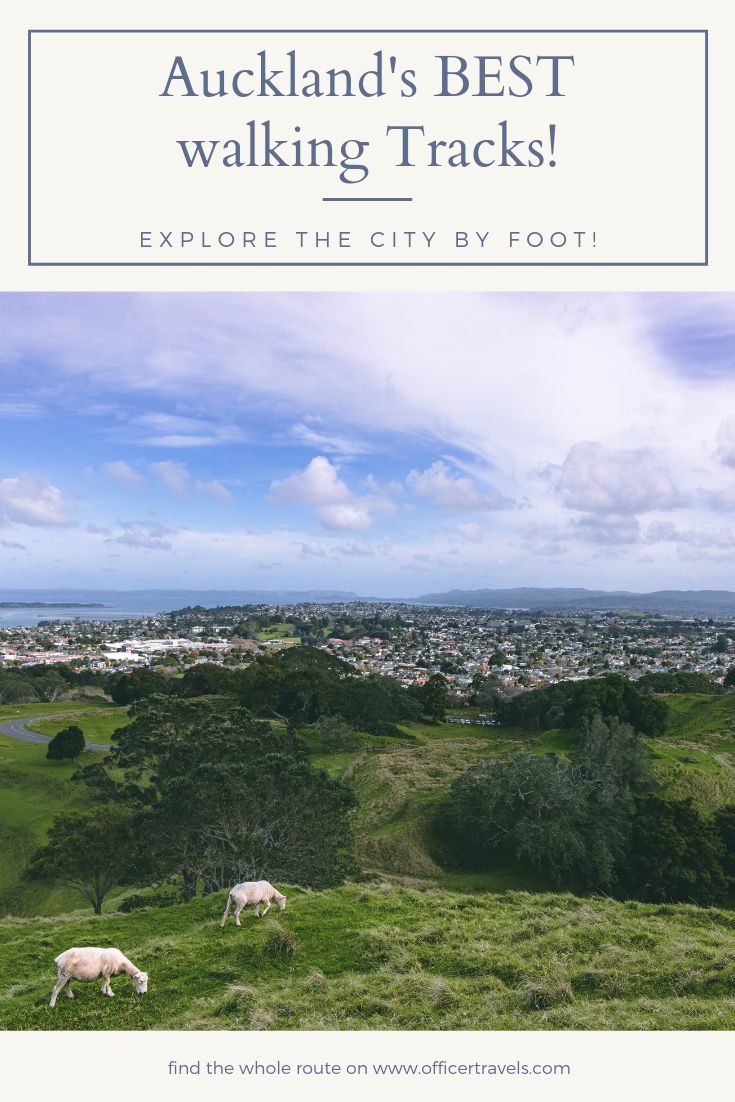 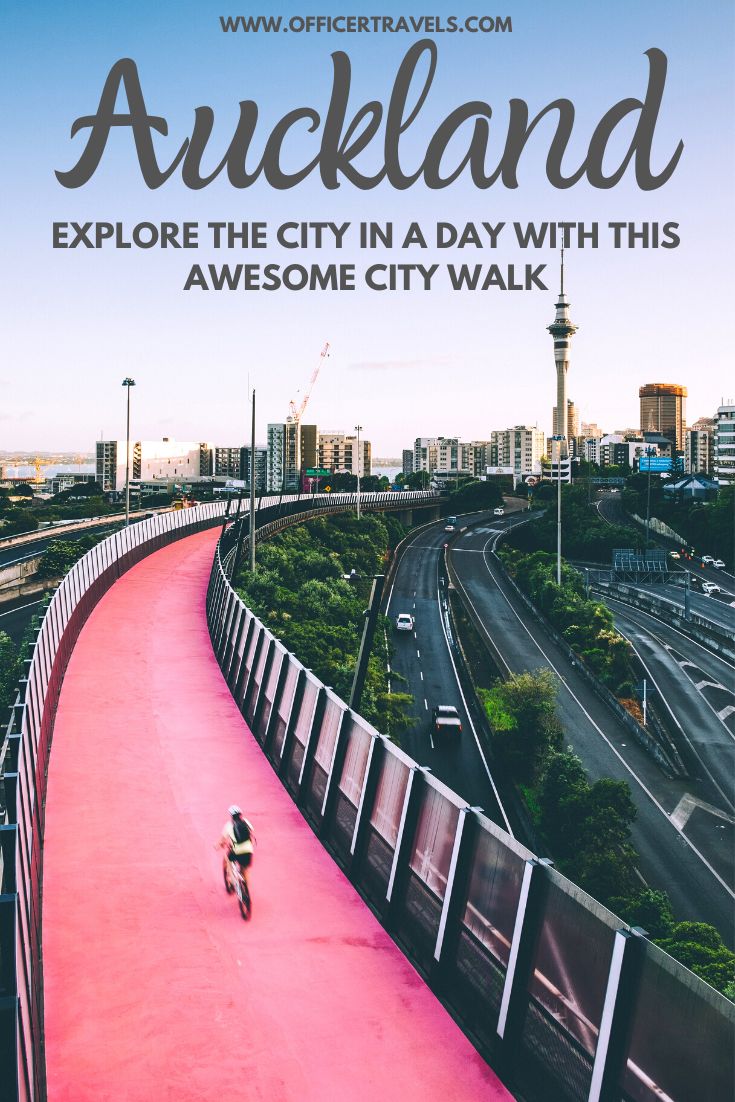 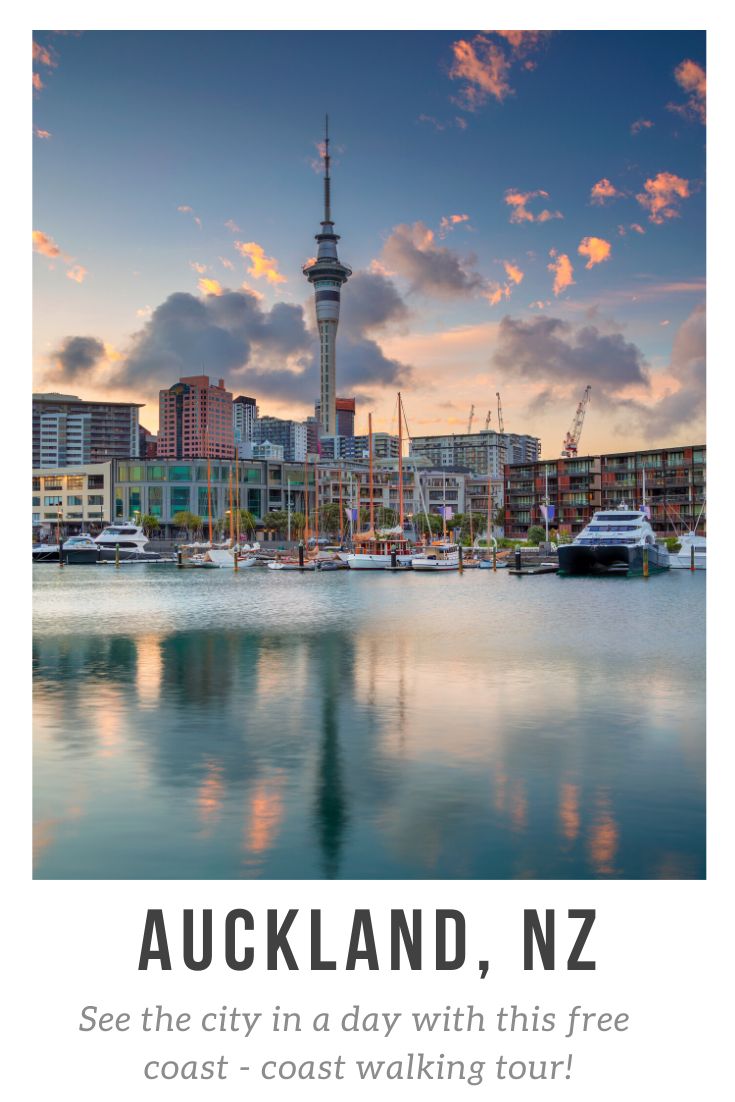