Where to find Humpback Whales in Australia

If there’s one thing you need to do while in this Australian city, it’s a Sydney whale watching experience. Whether it’s a paid tour or a free day on a coastal viewpoint, it’s worth doing.

Whales are one of the largest mammals in our oceans, the sea’s majestic clowns and to most, they’re an animal you can only dream of encountering.

For 5 months every year, June – November, humpbacks migrate past Australia’s east coast to the great barrier reef where they give birth before heading back to the Antarctic for the rest of the year.

These 5 months give locals and tourists alike the perfect opportunity to see whales from Sydney, it was a no-brainer that we would hang around to try and see these beautiful animals for ourselves. 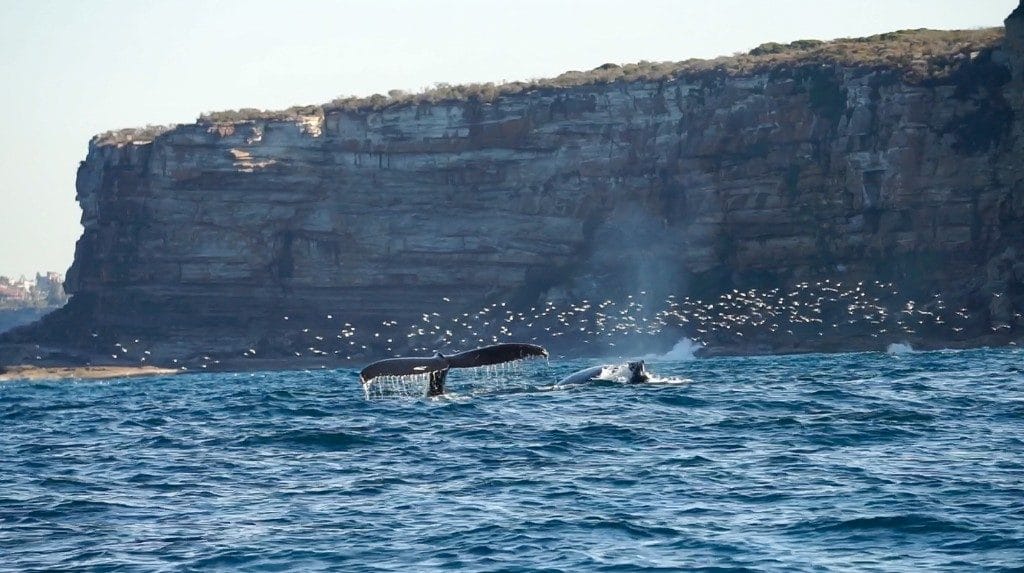 But exactly where can you go Whale Watching in Sydney?

Anywhere would be a simple answer. Find a high coastal viewpoint, gather your patience and you’re likely to see them. If you want a more accurate chance though, here are our suggestions on where you can see wild whales, close, with your own eyes. It’s an experience I will never forget and seeing just how big they are, blew my mind.

We were pretty dubious about doing a whale tour at first. It can be an expensive trip when there’s no guarantee that you’ll actually see whales. Well, we don’t regret our decision to go with ‘Go whale watching Sydney’.

The crew were fantastic with finding whales for us and their knowledge made it an educational experience too. They were even making sure that the children on board had a front-row seat!

We booked our tickets for the lunchtime tour online which meant we actually got 50% off, making our tickets just $35 each! Bargain!! (offer available until the end of August) No need to worry about booking weeks in advance either, they can usually squeeze you on a trip up to 30 minutes before they set off.

Our tour was 2 3/4 hour long, from the moment we left the harbour and entered open waters we were on the lookout for humpback whales. They explained the telltale signs that we were looking for as well as reassuring us that they’d seen a lot of active whales on their earlier tour, which means we were in for a good chance of spotting them.

We didn’t have to wait long. Within minutes of being in the open waters we saw the first signs of whale activity quite a distance ahead of us. I can’t describe how that felt. It might have only been a blowhole poof, but that was my first sighting of a wild humpback.

Something we didn’t think would actually happen. As we got close it was clear there was more than one, a mother and calf were slowly cruising the coastline, diving for 10 minutes then taking a breath and displaying their tails for us before they head back down. Was she teaching her calf how to put on a show? With each dive, it felt like they were waving to us. Then we spotted more whales on the other side of us. Bigger, a bit more active. Still beautiful.

We didn’t see any whales breach on this trip, but we did see around 5 maybe 6 individuals, as well as a fur seal and a small pod of dolphins! All were happy to have us coasting along with them. Even if our tickets had been the full price we certainly got our moneys worth!

Signs to look out for

When whales come up to breath, they ‘poof’ a pillar of water into the air from their blowholes. From the boat, this can be really obvious, or sometimes just look like mist floating along the top of the water. Either way, this is a sure sign that there’s a whale nearby and a more obvious sign might follow;

The tail of a whale is referred to as the Fluke. This will often follow a poof of water as they dive back down. If the tail isn’t obvious, look for unnatural breaks in the water – easier on a calm day.

Breaching. This is the most obvious sign of whale activity because it is literally a whale jumping out of the water. It doesn’t happen every day, as on such a big migration they have to preserve their energy. Humpback whales, however, are the clown of the ocean so if they sense a boat nearby it’s common for them to start to show off. Especially juveniles.

The second place we suggest for your Sydney whale watching experience is the Royal National Park.

Just an hours drive from Sydney CBD it makes a great day trip on its own, but in whale season there’s even more reason to go. Providence point lookout is the official point to see them from but just by simply walking the coastal track, you’ll have plenty of opportunities to see them from here.

We headed here the day after our whale watching tour, armed with the knowledge of what to look out for we were confident we would see them, but we were also prepared for a wait. Picnic packed, camera in hand, we headed to the coast walk and got comfy on one of the cliff out-hangs. We needn’t have worried about waiting. I don’t know how we always end up so lucky.

Within minutes we thought we saw the tell-tale signs of whales. ‘Poofs’ in the distance. It couldn’t be, could it? We’d only just arrived, nobody’s that lucky. Are they? 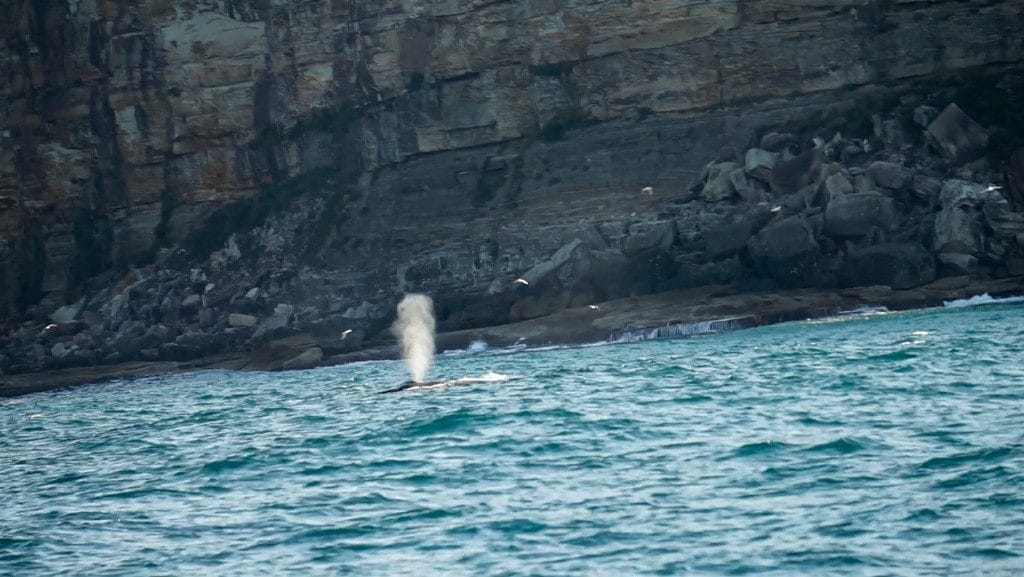 Over the next hour, we watched as this whale and her calf cruised south, heading back home to the Antarctic. Boy did they put on a show too. They breached constantly, one after the other, barely diving down before they were in the air again.

We spent the entire day walking the coast track, stopping at every outcrop available to see if we could spot energetic whales and each time we did. They’d barrel roll and splash their fluke almost like they were waving.

Of course, they were miles and miles off the coast, if it hadn’t have been for my new camera lens there’s no way we’d have been able to capture the moment like we did. However, just seeing them right there in front of us was amazing.

One the walk back to the car we decided to have one last stop at Providence point, the sun was setting now and the sea had calmed a little. It was our last chance of the day to get a look at the humpbacks as they migrate… we saw at least four. They were still breaching and showing off as we left or we could have stayed there all night watching them.

Other Marine wildlife you can spot off Australia’s east coast

It’s not just humpbacks that use Australia’s east coast as a motorway. There are heaps of others too! 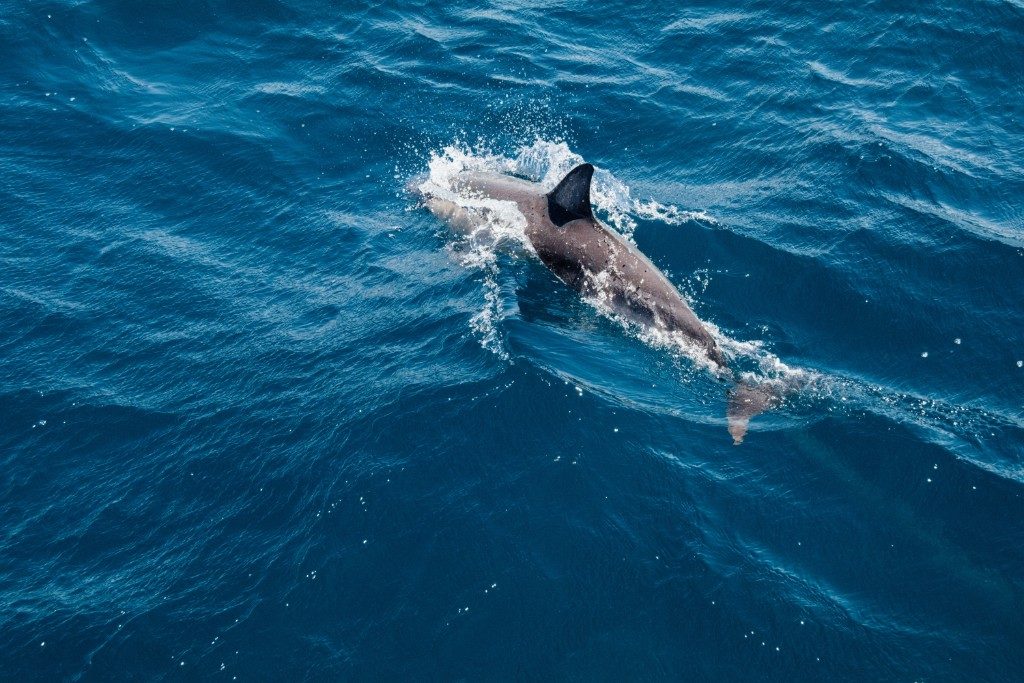 I can’t believe how lucky we were at the royal national park. As with all wildlife, there’s never any guarantee that they’ll appear but if you’re around Sydney during whale season it’s so worth trying your luck.

Our whale tour guides said that mid-August is the best time to see them as there are pregnant whales heading north to have their calf at the great barrier reef, and then the mothers who arrived early and have already had their calves heading south back home. However, humpbacks have been spotted as early as June and as late as November.

Have you seen humpbacks or any other whale in the wild? We’d love to know where! 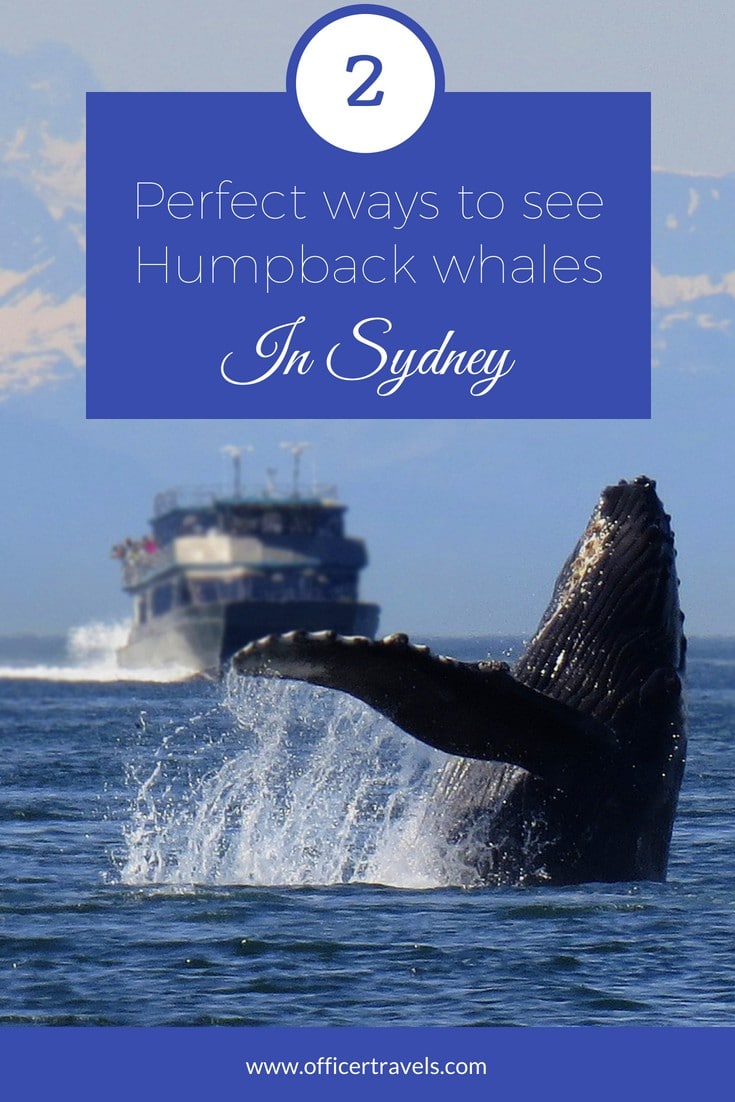 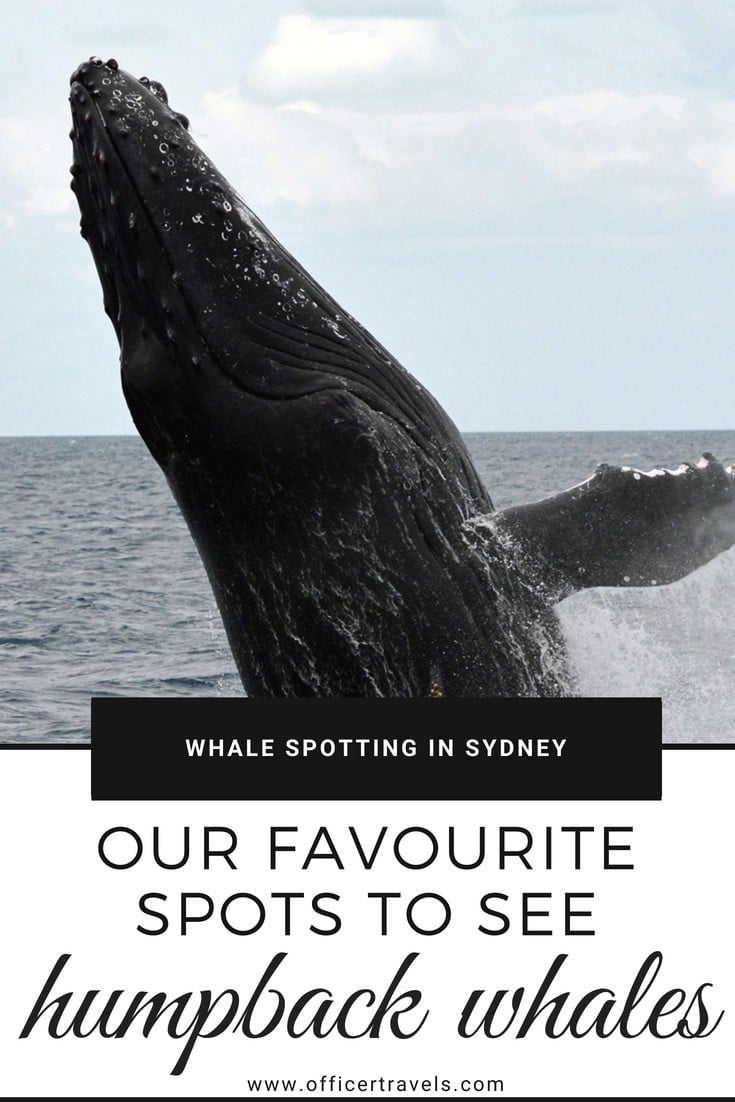 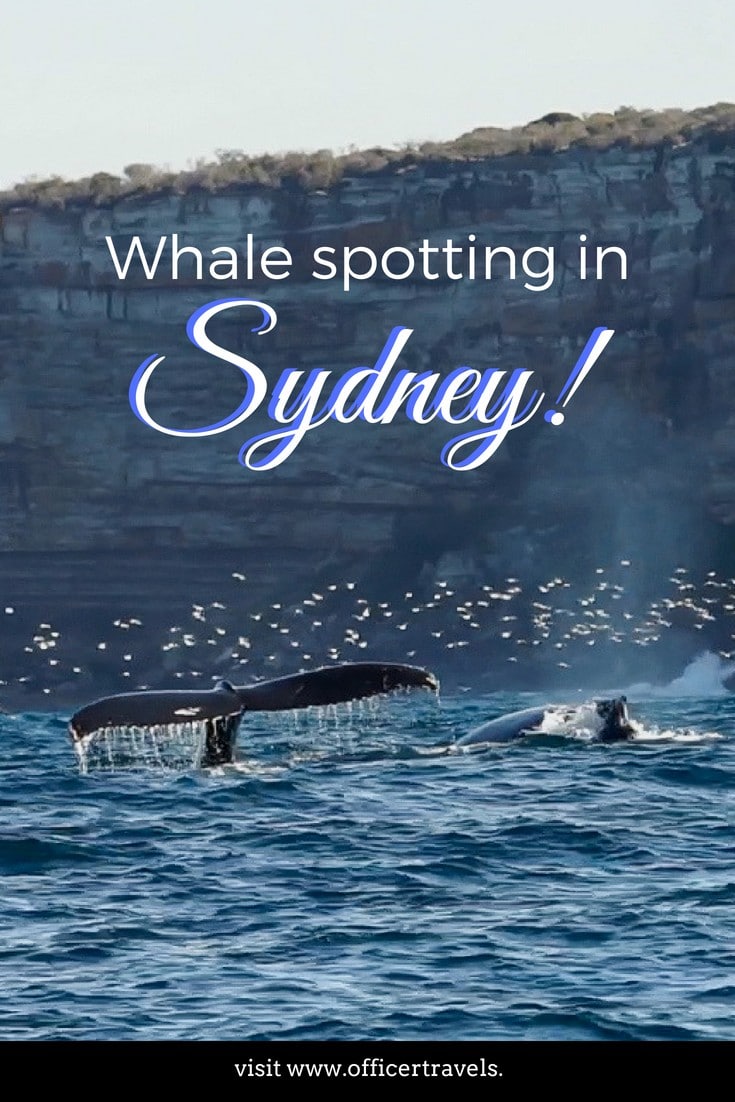 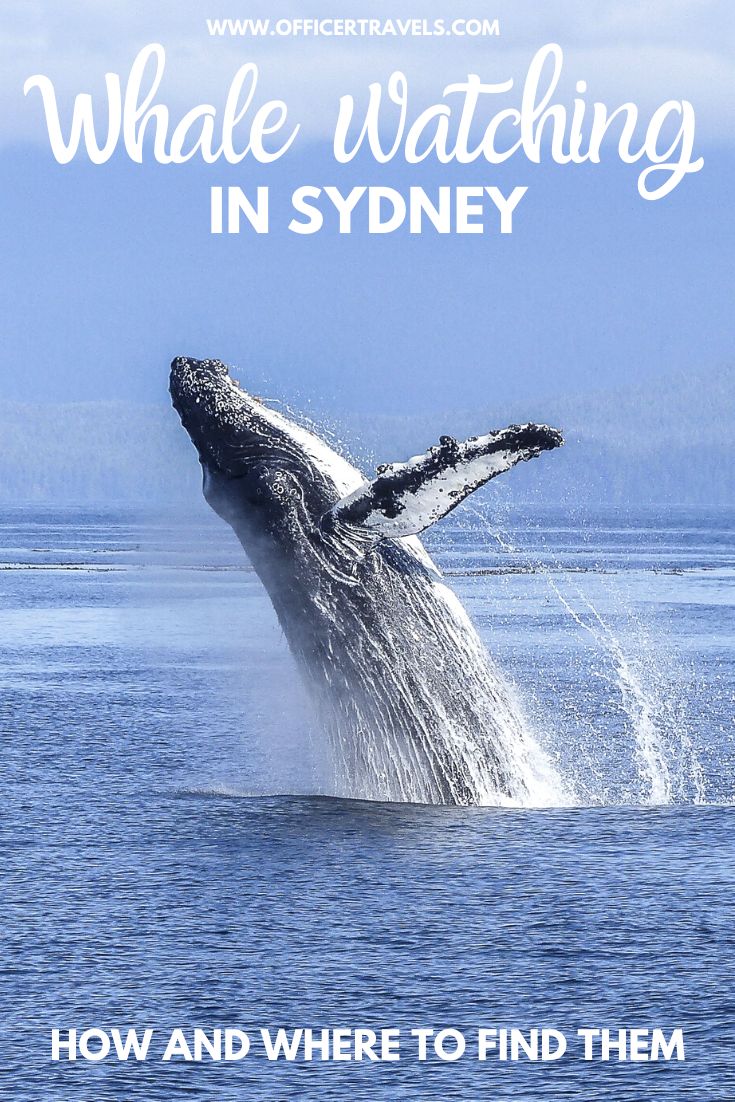