Wanting to escape the hustle and bustle of the city for a few days, we set ourselves a target; get to the end tip of land below Melbourne, Point Nepean National Park. This would be our first road trip in Mo and it was quite a drive, considering we were currently closer to Williamstown on the other side of the city. Almost 3 hours taking into account traffic and snack stops but it was worth it. 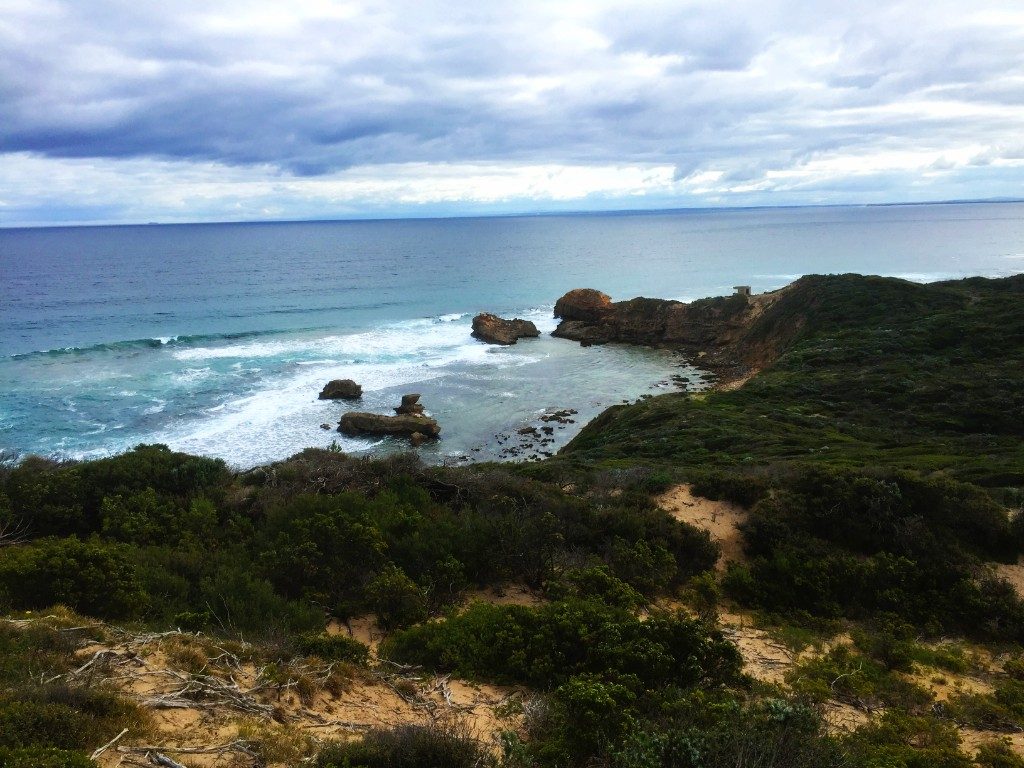 Wanting to escape the hustle and bustle of the city for a few days, we set ourselves a target; get to the end tip of land below Melbourne, Point Nepean National Park. This would be our first road trip in Mo and it was quite a drive, considering we were currently closer to Williamstown on the other side of the city. Almost 3 hours taking into account traffic and snack stops but it was worth it. In winter the place is such a haven of peace and tranquillity it was easy to believe you had found your very own hidden pocket of Australia; Although I am in no disillusion, it’s easy to see with the huge car parks, that Point Nepean National Park is a busy tourist attraction in summer. However, in the middle of August, we enjoyed the whole day by ourselves, undisturbed by other people, left to our own devices we explored the reserve and discovered a whole bunch of unexpected history.

“We were expecting good views of the entire southern East coast, which we got, but what was also hidden away here was a complete surprise…”

When we first came to Australia, we made a promise to ourselves, not to over research things. Just pick a destination and go without too much thought or preparation, it was the best way to avoid disappointment but also give ourselves the opportunity to be surprised on a daily basis; There’s no denying it, Point Nepean surprised us.

After driving to the furthest point possible on Point Nepean National Park there was a choice to walk the rest of the way or catch the shuttle bus to the narrow tip. At $15 per adult for the bus, we got comfy in our shoes and headed on the 2km trek expecting to not really see much except wildlife and Australian fauna. After about half hour on foot, signs started popping up pointing in all sorts of directions, it was here that we realised there was more to Point Nepean National Park than just birds and trees; it had an extensive wartime history to it, and that intrigued us enough to head off the main track.

As we wound our way through the dirt tracks heading further up the hill we admired the views, keeping our eye’s open for Roos and Emus in the distance. Our first discovery was an old wartime lookout and a dismantled Gun post. This concrete hide was used to look out for enemy planes during world war 1 and 2, the troops would have been up here for day’s at a time whilst they stood guard ready to wire through details to the gunmen, should enemies be spotted heading their way. The huge gun post would have housed a cannon in WW1, and a more modern shelled gun for WW2, the tracks enabling it to turn a full 360’ so the enemies couldn’t sneak up from behind. The original gun has been removed but photo’s at the information stand show you just how big the contraption would have been once upon a day. There were several of these lookout spots dotted across the coastline, each wrapped in an eerie sensation that told a story all of its own. 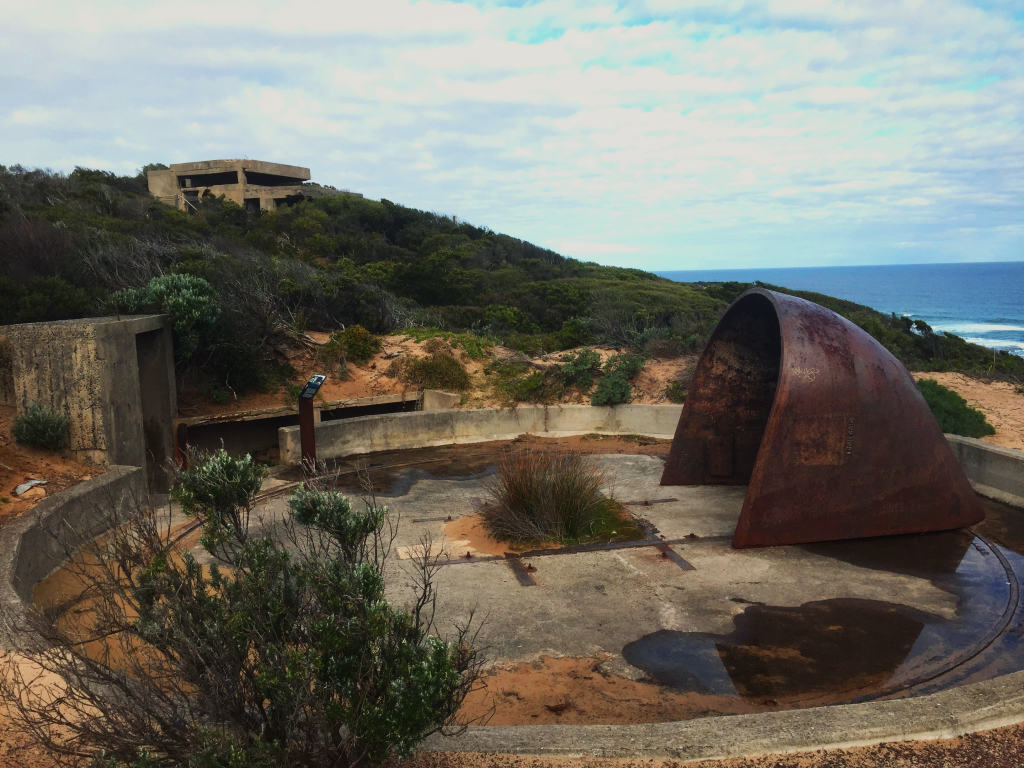 A humbling slice of history

The most humbling and perhaps emotional part of the day was once we reached the very tip of Point Nepean National Park. We were expecting the amazing views of the entire southern East coast, but what was also hidden away there was an entire wartime barracks and tunnel system, including the original bomb proof room and ‘disappearing gun’, left almost untouched. The modern speakers installed throughout the tunnels played a ghostly whistle that took you right back to the days there would have been workers down there either taking shelter from the bombings or going about their everyday lives; having lunch, playing cards.

The Disappearing Gun, aptly named for its ability to drop back down into the shelter, out of sight, was an impressive piece of kit given its age. When you think of boys as young as 16 perhaps having to use a machine like this, in a place that back then would have been the bottom of nowhere, surrounded by nothing but water and other troops for company it really hits home how hard it must have been. The view they had would have been a lot different to the one we admired off the coast that day. 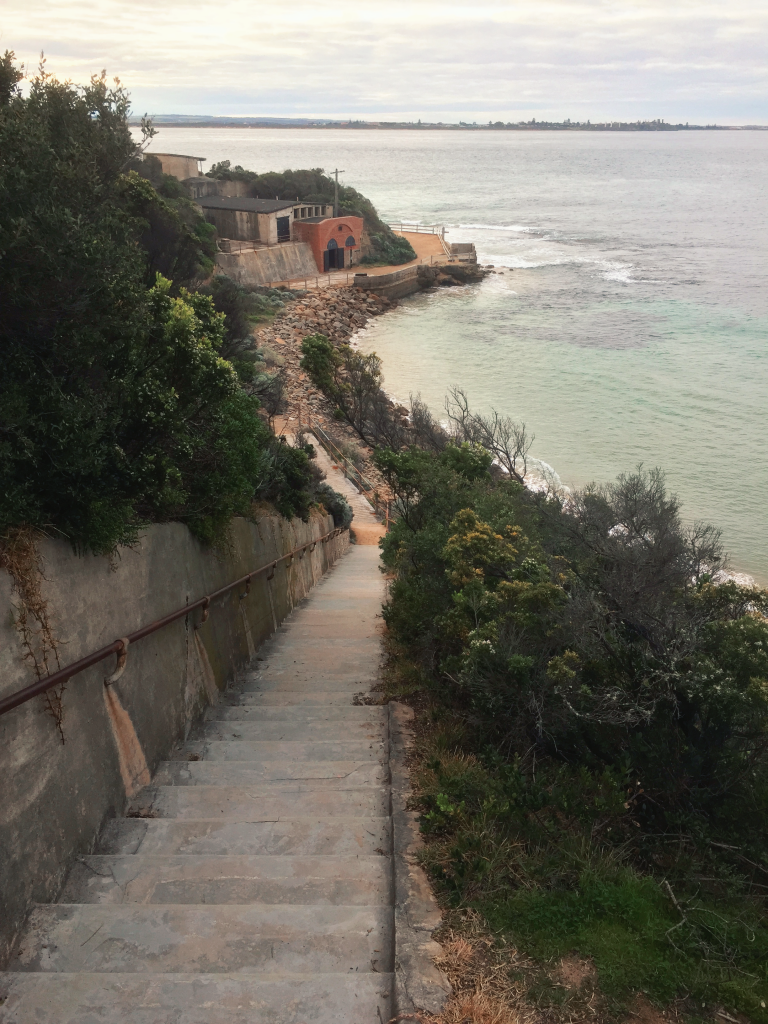 The tunnels seemed to go on for miles, steps lead you further below the surface and each turn showed you another slice of history. We spent hours exploring the barracks before heading back to the car just as the sun was going down. Although a little bit of research on Point Nepean National Park would have told us all about the history it holds, it was nice to be surprised and only backed up our promise to not look into things too much, a bit of spontaneity can go be so rewarding.

Have you ever stumbled upon a tourist spot you’d never heard about? Did you love it as much as we loved Point Nepean? We’d love to hear from you!! 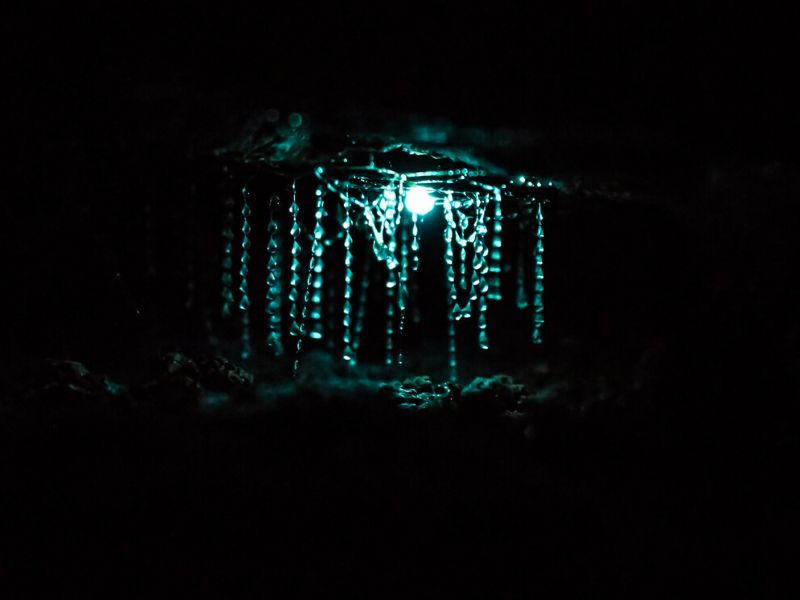 The Best Place to See Glow Worms Near Brisbane! 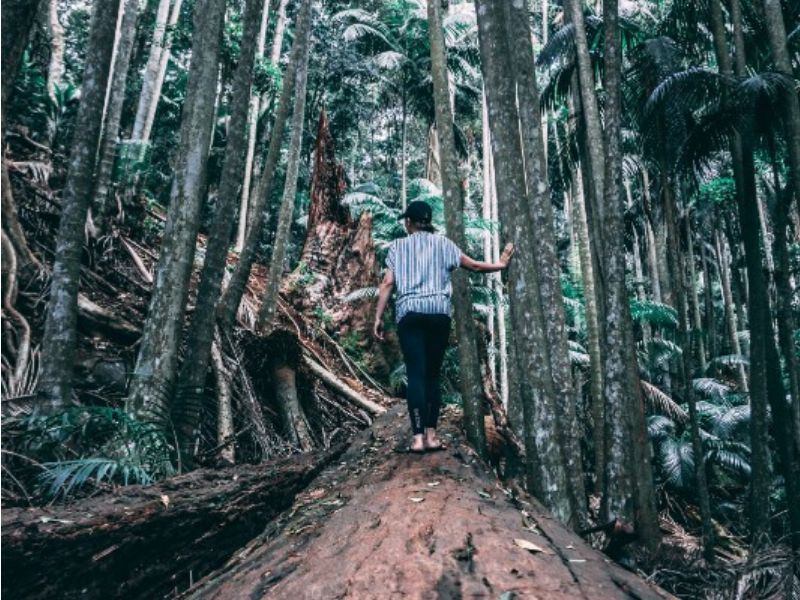 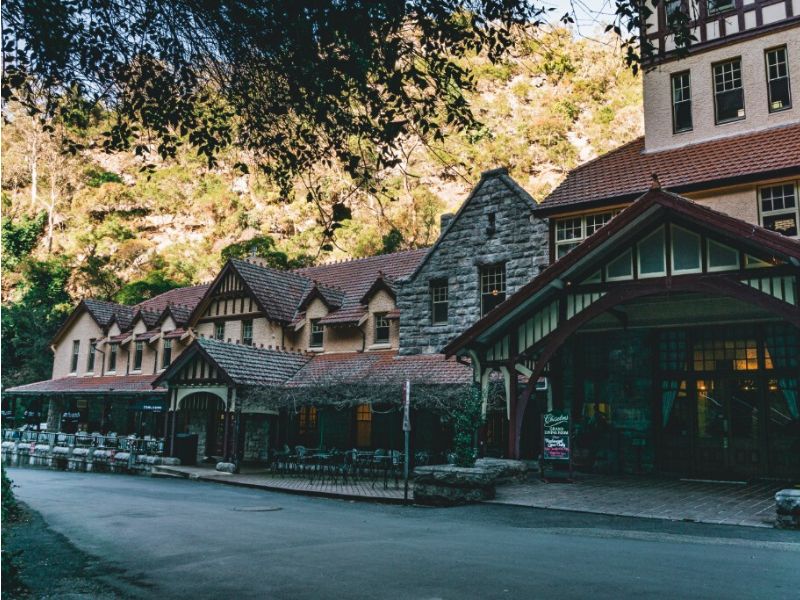 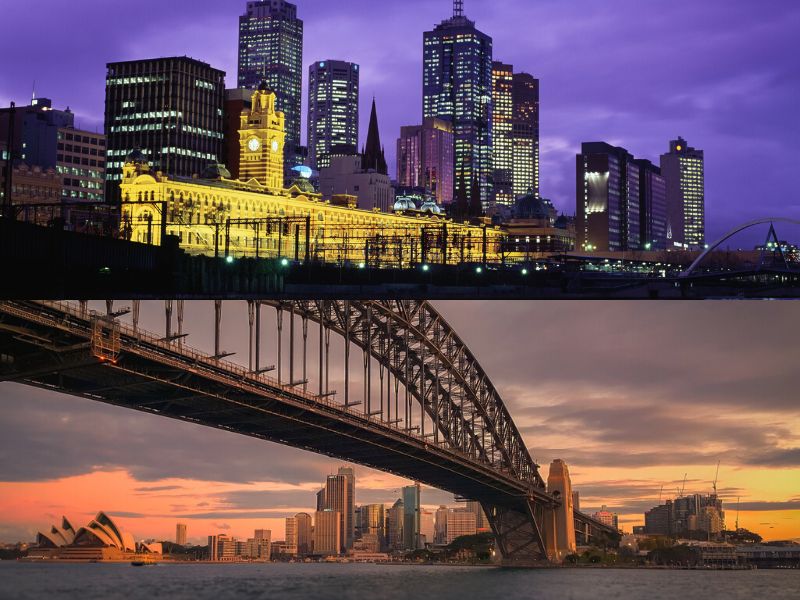 What to Expect When Moving From Melbourne to Sydney 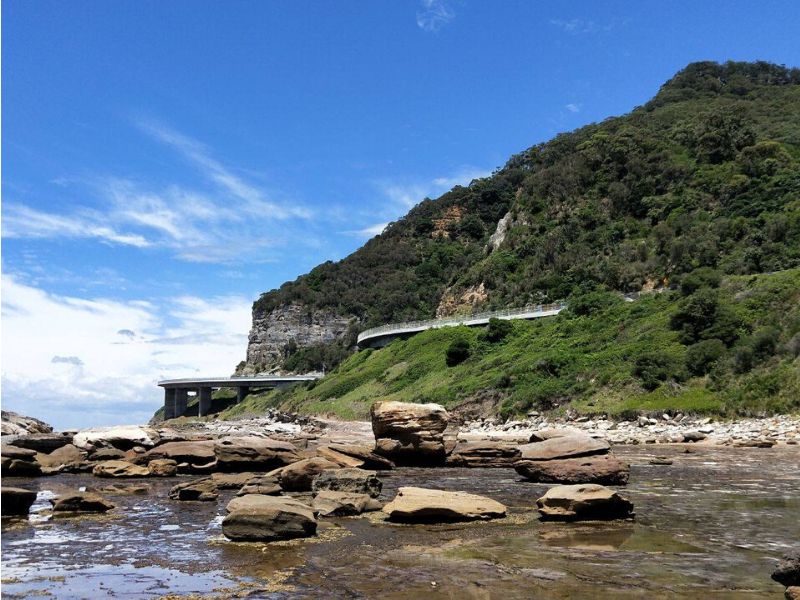 6 Unmissable Places to See Between Melbourne and Sydney! 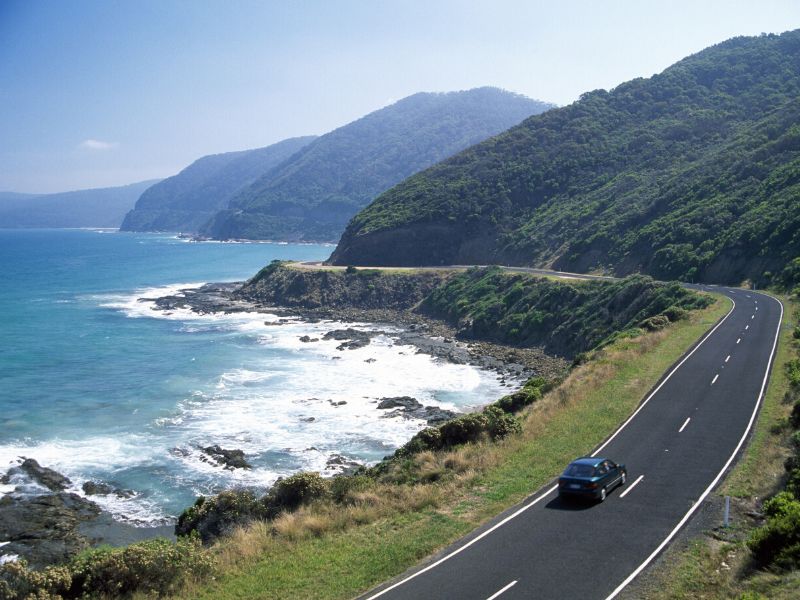