Dinosaur Eggs? Alien Pods? Or purely a natural wonder? Either way, Moeraki Boulders Beach is a geological wonder that’s an iconic part of the country’s landscape and Maori culture. If you’re looking for unique landscapes while you’re in New Zealand, this is one for the list.

However, they’re not a place you can simply rock up to and snap away until your heart’s content. Due to their beach location, they require a small amount of planning for you to get the best viewing and photos! Here’s our guide to the Moeraki Boulders Beach that will aid you in cracking the mystery that surrounds them! 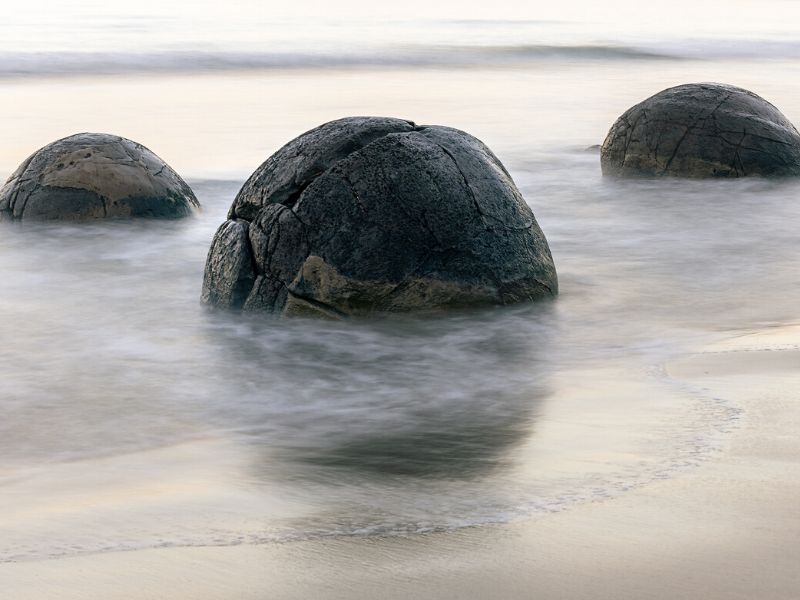 Jump to what you’re looking for;

What are the Moeraki Boulders

The Moeraki Boulders are a group of around 50 perfectly spherical boulders that can be found on the Koekohe Beach in Moeraki.

If you’ve seen photos of them before, you know that they’re pretty huge but did you know the largest is said to weigh around 7 tonnes and be 2 meters in diameter?

That’s as heavy as a fully grown male African Elephant!

The name Moeraki means “drowsy day”, but I’ve been unable to find out how it came to get that name. Perhaps something to do with the slightly calm waters here? 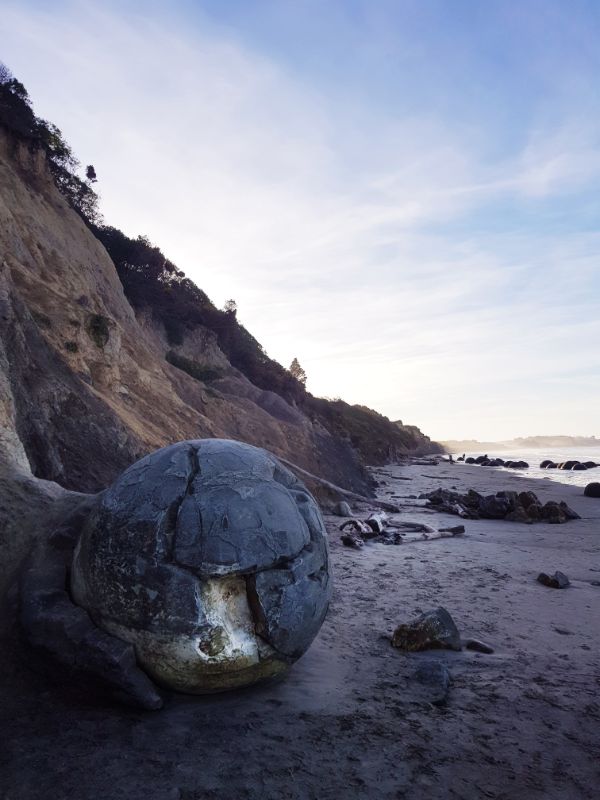 One of the Moeraki Boulders emerging from the dunes

How Were the Moeraki Boulders Formed?

This is what makes the Moeraki Boulders so interesting.

There are no solid reasons as to why they formed the way they did, although the most common theory is that they formed on the sea bed around 60 million years ago with a unique combination of concretion and erosion.

As the marine mud layers were compressed, and the earth shifted upwards, winds and waves slowly eroded the soft layers of the banks to reveal the boulders on Koekohe Beach.

Scientists believe there are still plenty of Moeraki Boulders hiding inside the cliffs that run along the beach. 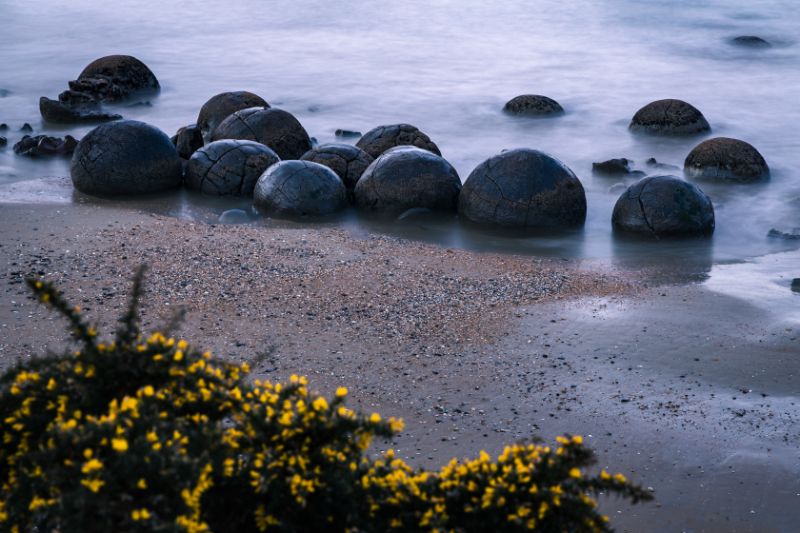 So where exactly are the Moeraki Boulders?

Koekohe Beach is on the Eastern Coast of New Zealand’s South Island, more specifically within the Otago Region.

There are two main ways to access the boulders, both are free;

Via the Moeraki Boulders cafe: take the private road immediately left after turning onto Moeraki Boulders Road off State Highway 1. A short walkway leads to the boulders from behind the cafe.

There is a $2 donation box at the start of the walkway from the cafe car park. This has not been set up by the DOC, who ‘own’ and protect the boulders. The donations go to the cafe to help them maintain their walkway and car park.

The Maori of New Zealand have their own beliefs when it comes to the Moeraki Boulders, in the same way, the Australian Aboriginals have beliefs about the Devils Marbles.

The Maori believe them to be leftovers from the baskets of an ancient ancestor after their waka/canoe, Araiteuru, got caught on the nearby Shag Point/Matakaea.

The Moeraki Boulders represent the Eel and Kumara/sweet potato that washed up from those baskets.

When is the best time to see the Moeraki Boulders?

The Moeraki Boulders can only be viewed in all their glory at low tide. When the tide is in they can still be seen, but only the very top of the boulders show above the water and you’ll not be able to get close to them.

Midday is the busiest time for seeing Moeraki Boulders Beach. It’s around this time that you will see tour buses/coaches in the car parks along with lots of other cars and campervans.

High tide happens twice a day at varying times. To avoid it, you can check the times on the Met Service site.

If you’re a photographer, sunrise is when you get the best light at the Moeraki Boulders Beach.

When low tide coincides with sunrise, this is when you are likely to get stunning colourful skies and a reflective glow on the rocks themselves.

It’s less busy at sunrise, with only photographers making the effort to get up so early to see the Moeraki Boulders. 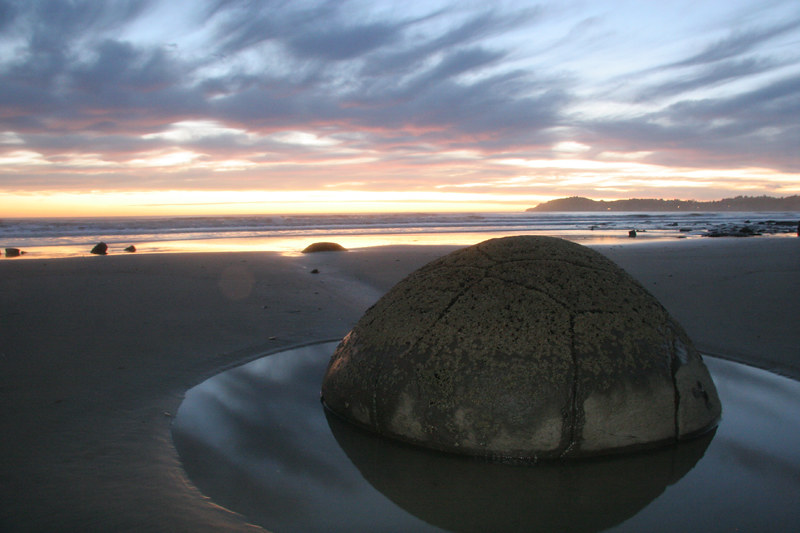 Sunset is slightly busier than sunrise but quieter than midday. By this time most of the tours have ended so it’ll only be road trippers and campers that will be hanging around at this time.

The sun drops behind the cliffs to the back of the beach at sunset which makes the light disappear pretty quickly from the Moeraki Boulders. However, if there are high or mid clouds in the sky you can still get some pretty colours as the backdrop for your photos.

We use the Clear Outside App to predict what the clouds will be doing when we’re hunting for sunset photo locations. It can give you a good indicator of whether there will be prime clouds (High/Mid) for those awesome bright colours. 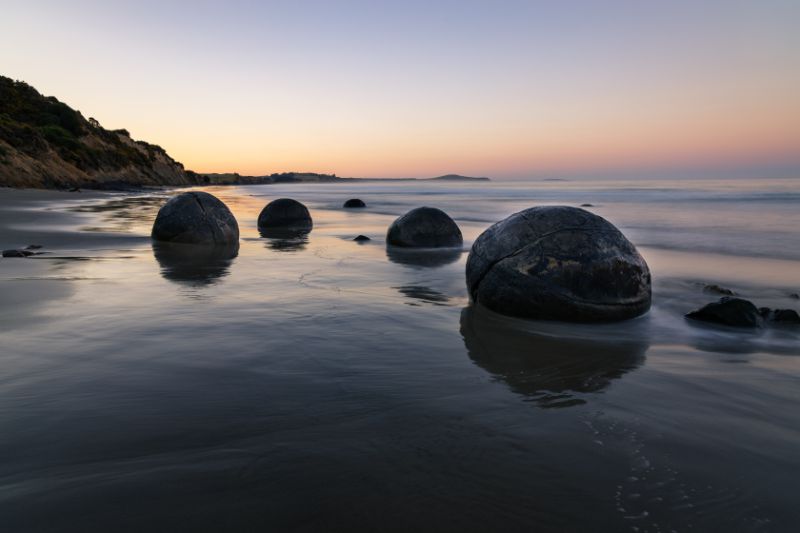 Places to Make You Fall in Love With the Catlins Coast

Other things to do near Moeraki Boulders Beach

While visiting Moeraki Boulders Beach, don’t just swing in and fly off again. There are plenty more photo opportunities nearby!

If you’re wanting to see Yellow Eyed Penguins while you travel New Zealand, this might just be the place to go.

The Katiki Point Lighthouse colony is the most significant in the Northern Otago region. They’ve made the dunes here their homes so it’s important to stay on the tracks and keep the noise to a minimum.

While you’re here you might also see some of the resident New Zealand fur seals or one of the many shorebirds that also call this area home.

The Katiki Point Lighthouse was built in 1878 and offers some spectacular views of the Moeraki peninsula. 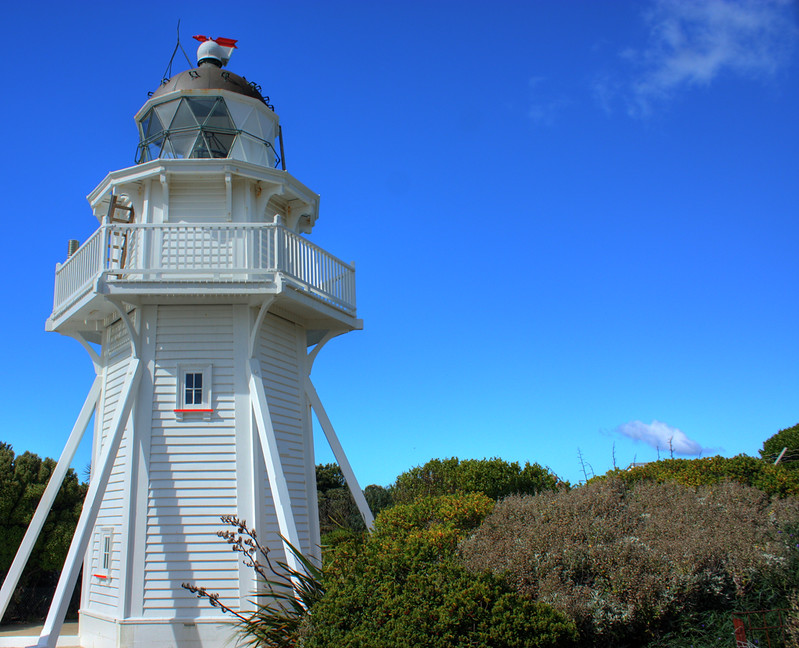 17 More Things to do in Wanaka After ‘That Tree’

What to take to Moeraki Boulders

The walk to Moeraki Boulders Beach is a really easy one. The only thing you really need to take with you is your imagination and your camera! A waterproof bag would be a good idea if you’re going while the tide is still high, especially if you intend to get a photo perched on top of the rocks.

Had you heard about Moeraki Boulders Beach before? It was on our New Zealand Bucketlist from way before we even moved to New Zealand as they reminded us a lot of the Devils Marbles in outback Australia! Have you seen this kind of formation anywhere else? If you liked this post, don’t forget to give it a share and check out others we think you’ll love, listed below! 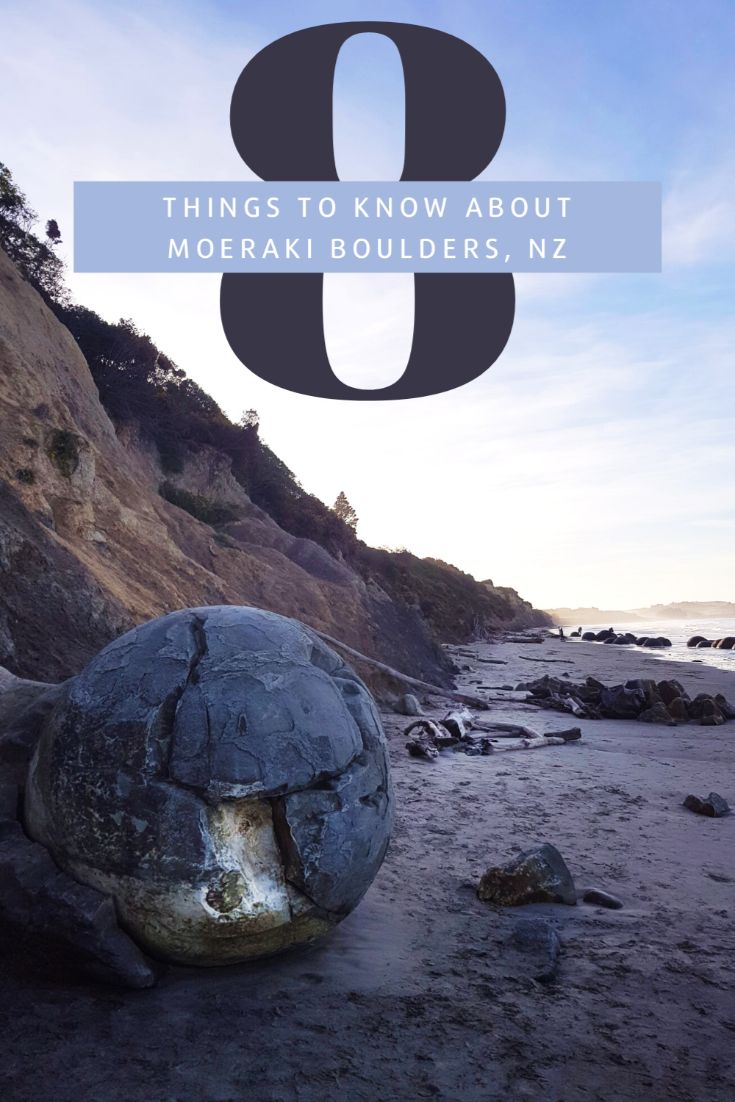 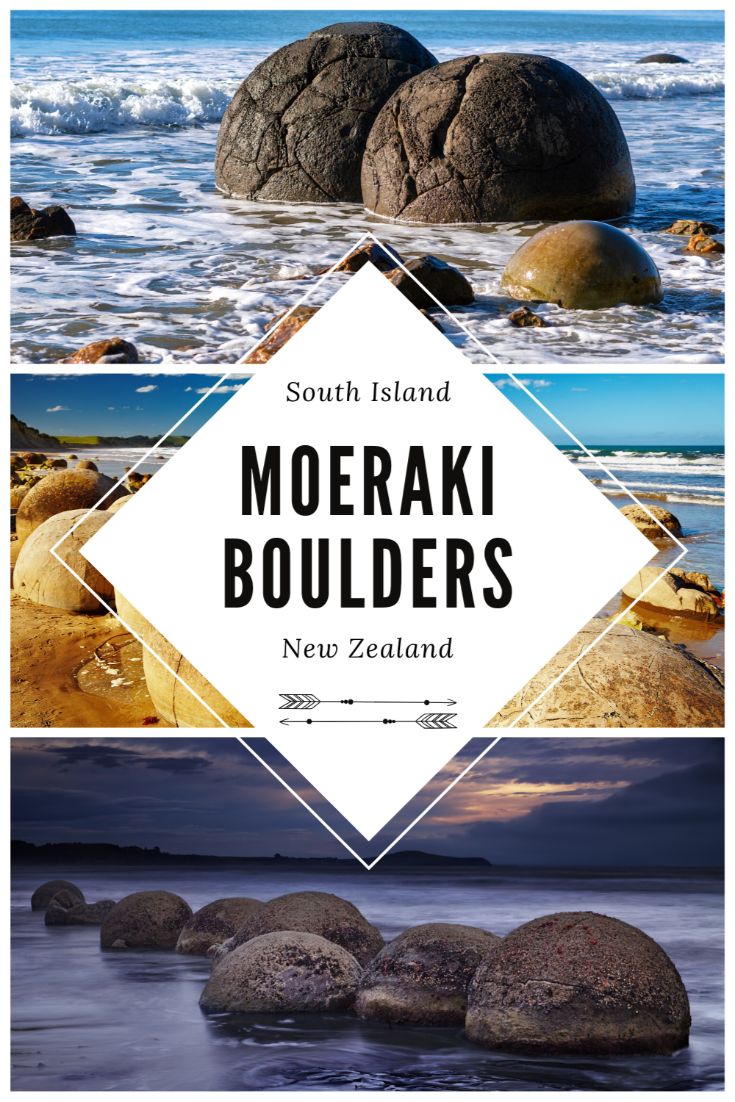 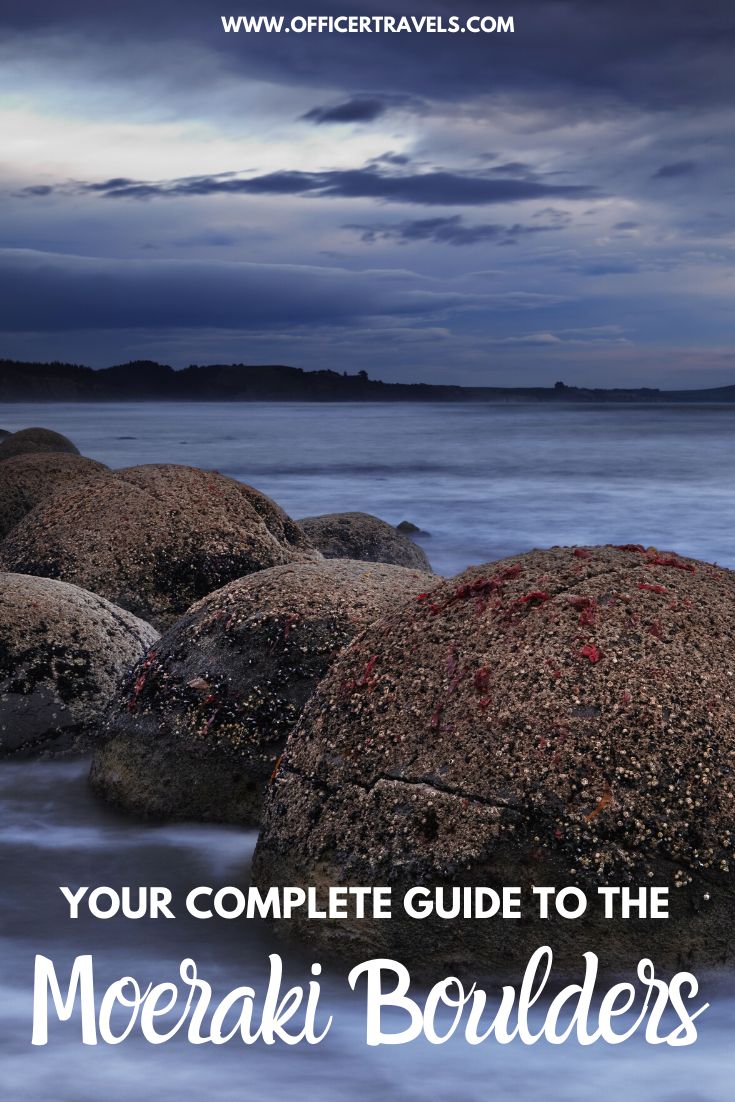 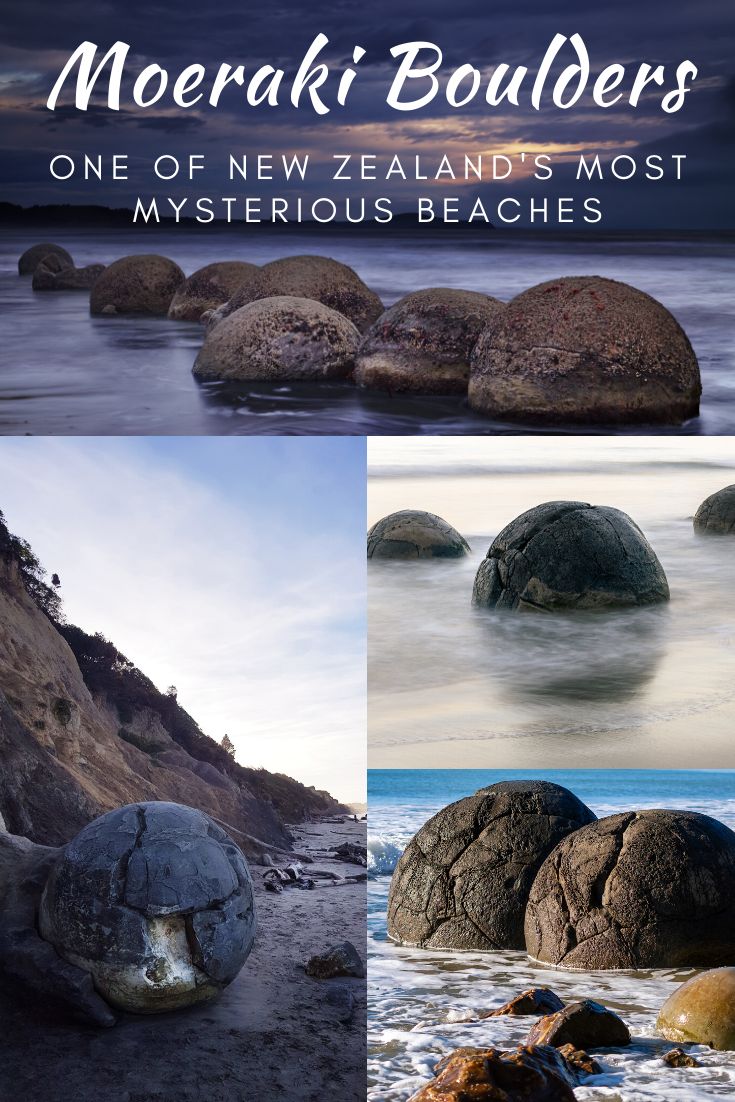 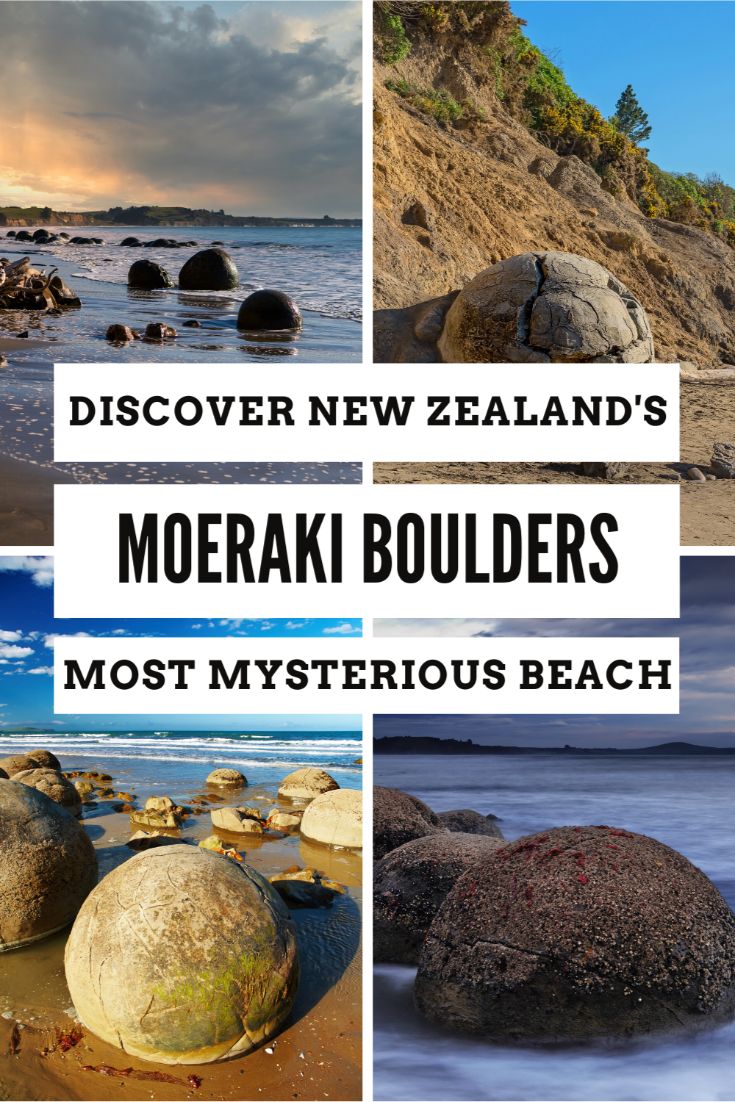 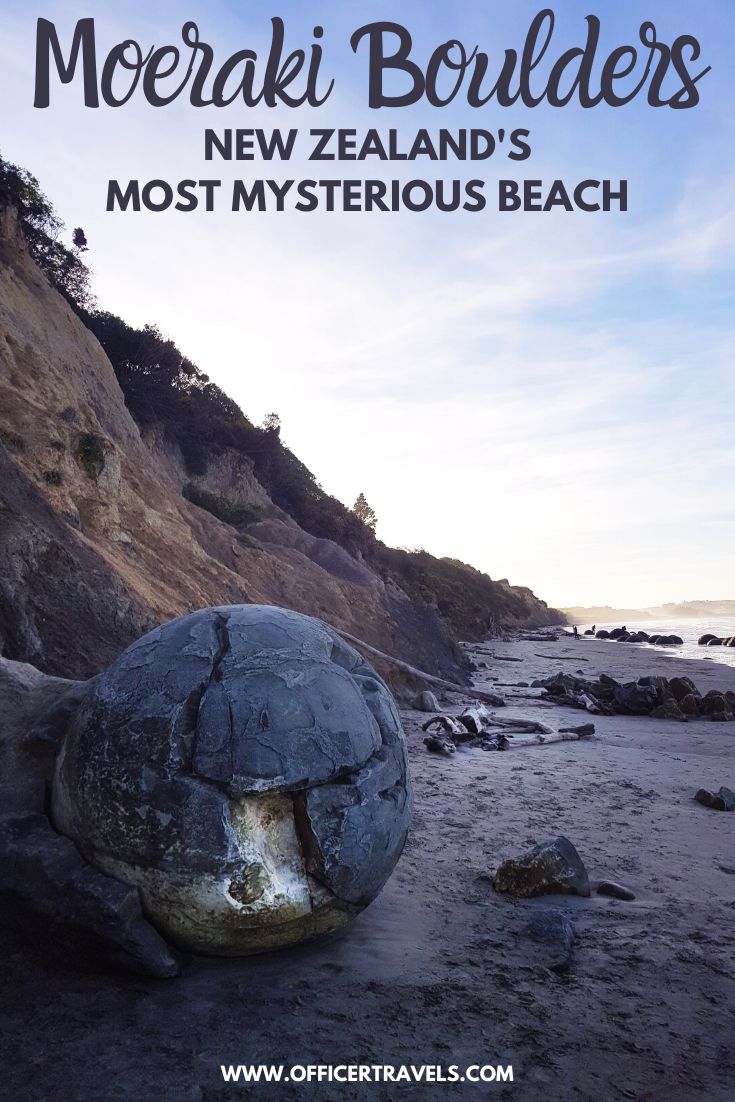