What our first month in Melbourne taught us

Whoa, where did July go?! We’ve been in Melbourne a full month now, and yes, we’ve been absent from here for the entire time.

Sorry. So much has happened, I’m unsure where to begin! Melbourne is an absolutely fantastic city if there were more like this at home – I’d probably consider myself more of a city chic than a country bumpkin!

I feel like I’ve taken to city life a lot easier than I expected – I’m even travelling on the trains by myself! – and that thought both excites me and terrifies me all at the same time. Here are a few things we’ve learnt after a month in the world’s most livable city: 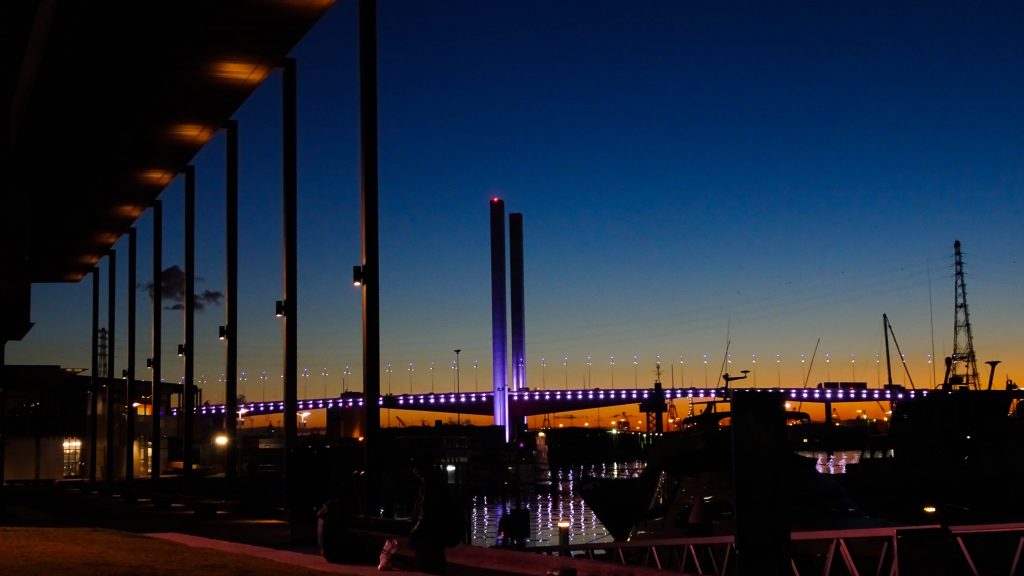 It’s so relaxed and easy here that it has given me the confidence to navigate the transport on my own, in a city that is easily twice the size of any I’m used to at home.

In London everything is so rushed, people are stressed and the transport is never on time. Ever; tensions run high on a daily basis on the underground.

Here it’s the complete opposite. Yes there’s rush hour, it gets really busy,  and sometimes there are delays but people are still happy to share a smile, help you if you’re lost and guess what… even talk to you on the train!… A very rare occasion in London, and something that will earn you funny looks from locals if you dare to try.

It’s been a really nice welcome into our new home and gone a long way towards helping me settle in – something I thought I might struggle with.

6 Plastic alternatives for your day trips

It’s OK to talk to strangers –

Admittedly this is within reason… that dodgy looking man shouting at Pigeons in the corner? yea probably don’t talk to him. The couple on the train platform looking a little lost? It’s OK to ask if they need help, they might be thankful for a friendly face!

This isn’t something that particularly bothered me back home, I’ll talk to anyone, but here you’re less likely to get ignored or glared at if you do.

People are actually willing to have a convocation with you while you serve them (or vice versa) at the store.

What surprised us most though, was the number of people who will say hey to you in the street or comment on the weather (or your accent!) instead of just putting their heads down and rushing past you in fear you’ll make eye contact.

Melbourne does get cold –

So this 100% depends on when you’re here. December? Not a problem, bikinis all day long. July? Bring thermals.

We laughed when people told us it got ‘cold’ here, thinking maybe it’s because they were used to the 40’c+ summers. We thought because we were coming from England it wouldn’t be that bad…. wrong!

The first 3 weeks were ok, we managed in thin jumpers and only really needed our coats at night. This past week?… 2’c. Highs of about 8’c. In Australia. Who knew!

It’s cold. So. Cold. We’re really glad we bought our coats with us that’s for sure! BUT the weather will change and summer will be back soon, so we’re not sad about it.

One last thing about the weather – while it’s cold… it’s hardly rained and there’s this thing above us called a, a blue sky? It’s strange. We don’t get it in England.

Unmissable Places To See Between Melbourne And Sydney

Beer really is as expensive as everyone tells you –

‘Melbourne is expensive though’, was one of the first things people would say when we said this was our starting point.

You know what? It isn’t too bad, not once you’re earning Dollars instead of converting everything into the Pounds you exchanged to bring with you. You know what is expensive though? Booze. $90+ it cost us one night for 4 pints (Which, I’ll add, aren’t even full pints here! they’re ‘Schooners’, which are 3/4 of a pint), and 1 Burger.

That roughly converts to about £50. This wasn’t even in the city centre either! So if you’re an avid drinker, I’d really consider this before heading here, unless you’re ok with drinking the heavy hangover-inducing ‘Goon’ (really cheap ‘wine’)

You can’t ‘just nip to Coles’ for your last-minute late-night booze either, supermarkets in Melbourne (and Australia as a whole) don’t sell alcohol. You have to go to a proper off-licence (or bottle-o) for alcohol – most of which in Victoria shut between 8/9pm.

What To Expect When you Move From Melbourne To Sydney

As much as you love it… you’ll want to leave eventually.

We didn’t come here to get comfortable, which is what you risk becoming if you stay too long. With comfort comes roots, and roots are hard to move.

When I left England, my personal goal was to get to know a place until I could navigate it confidently myself…I feel comfortable doing that around Melbourne now, not just Melbourne CBD either; a handful of the outer suburbs too and a good chunk of the Metro lines.

I know where does the best Donuts and cupcakes, Dec has a favourite Coffee shop, time to call it a day.

Trust your instincts, don’t force yourself to stay in one place just because ‘you haven’t done it all yet’ because honestly, we think you’ll never get through it all if you’re living off other people’s lists.

Got a big trip coming? Read our top tips on how to deal with jet-lag, and the not so sexy side effects you might experience!!

Home>Australia, Travel Diaries>What Our First Month in Australia Taught Us! 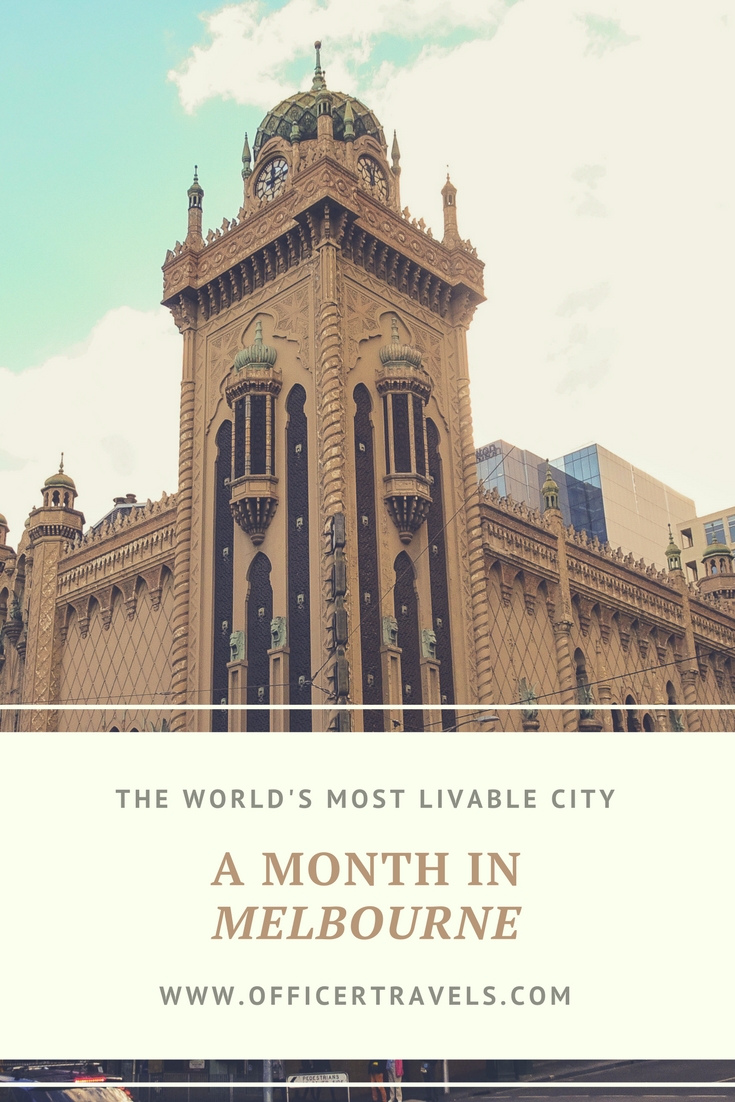 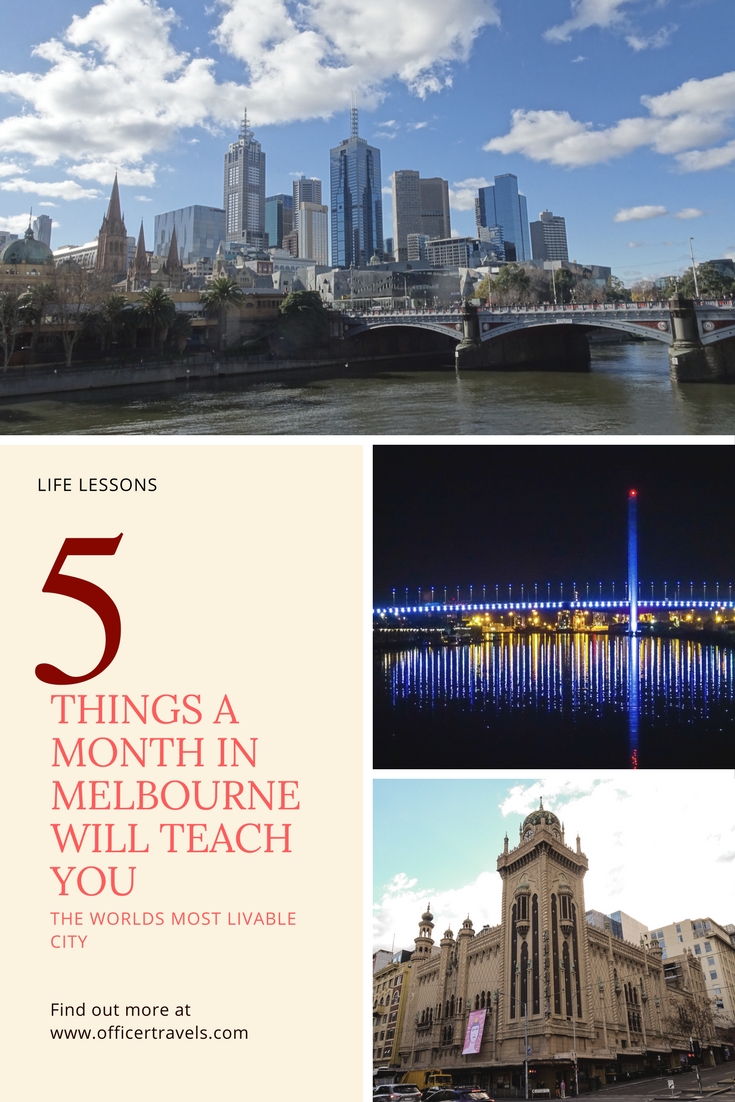