How to turn your junk into money

Our tried and tested ways to save money for travel

When we decided to trade in our urban life for a backpacking adventure we ultimately chose to give up everything. When I say everything, I mean everything!

The only things we kept hold of were extremely sentimental items, Dec’s guitar and my craft items… not a lot considering we were living in a 3 bedroom house; you can imagine the amount of junk we had acquired!

We gave ourselves four weeks to get the house emptied before we made the move back to our parent’s house (because the fastest way to save is to cut out bills if you can).

We know moving back in with the ‘rents isn’t a viable option for everyone, so here are a few tips on how you can get the full potential out of your old ‘junk’... One mans trash, after all, is another man’s treasure… 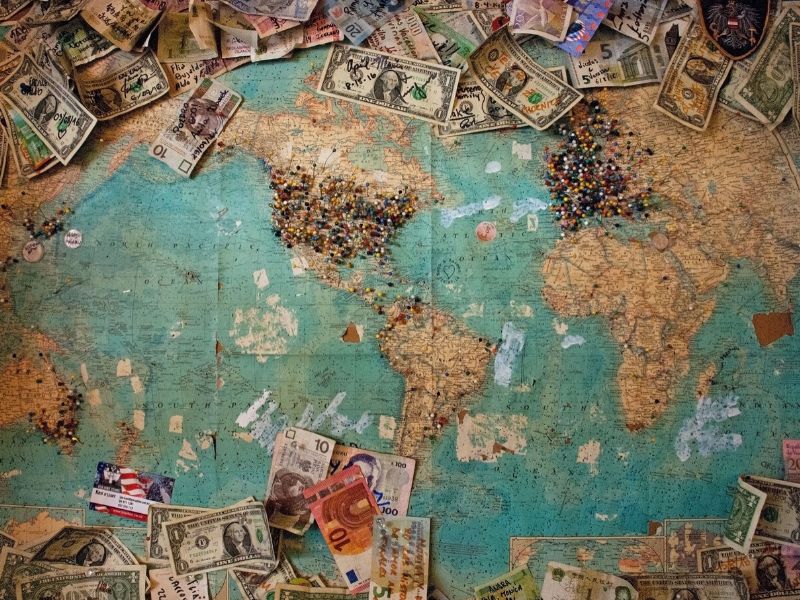 It’s such a daunting task to clear our a whole house. I found myself walking around wondering how on earth we would get rid of it all… we’d gathered a lot of it in the short time we’d lived in our house…

I found the easiest thing to do was to break it down. Don’t tackle it head-on all at once.

Instead, I went around room by room. I tackled the smallest room first (this ended up being the most cluttered) and worked my way around.

Tip; Don’t be afraid to work slowly, it isn’t easy saying goodbye to things you’ve accumulated. Especially if you have hoarder tendencies, like me!

Reflection After 12 Months Of Travel 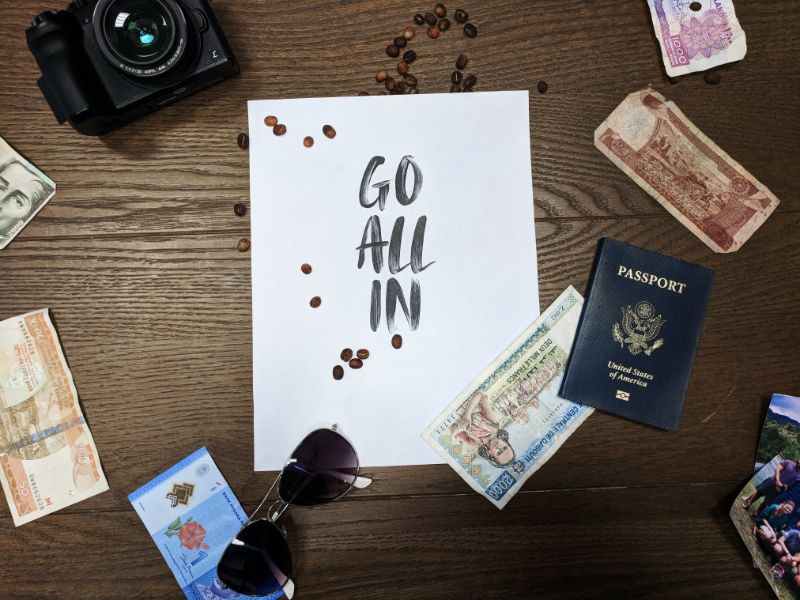 Once you’ve started you’ll need to decide what you’re keeping, what your selling and what is only worthy of the nearest bin.

We would be living out of a backpack so this meant we didn’t have space to take everything. For each room, I created three piles; keep, sell, bin.

I then narrowed these piles down even further every time I did another room.

What I ended up with was a small pile of sentimental items that were going into storage, a car full of items to sell and a skip full of rubbish.

Be ruthless. If you decide to bin something, do it straight away. I found myself tempted to move things out of the bin pile if I left it there for a day or two.

A Guide To Finding Cheap Flights 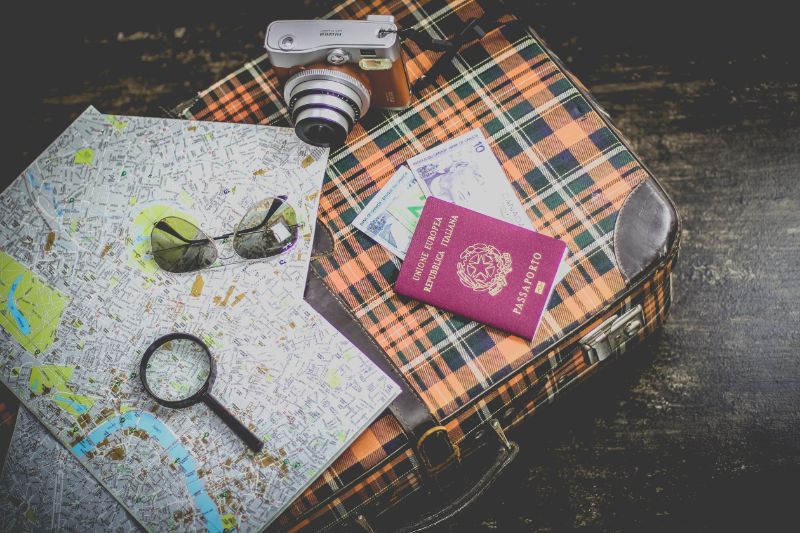 Car boots don’t just happen in the summer you know! (We found 3 just local to us that are still going in the winter months) We were really dubious for our first one.

With the car packed to full capacity, we pulled up to our spot at 6:45 am in the dark and would you believe it, we sold a lot of the stuff to other traders before the gates even opened.

Sure, they would probably sell it on again, but we weren’t here for profit. We were here to sell our junk.

How To Extend Your Australian Visa

A couple of tips for surviving your first car boot;

– It’s ok to say no. You will get people offering you silly money for something, but stick to your guns! You don’t have to sell to the first person who shows interest, and you certainly don’t have to take their first price.

– Expect people to haggle. They won’t accept your first price either, so before you give someone a price, have in mind how low you’re willing to go and stick to that. I won’t lie though, a couple of times I gave away free toys to cute kids because it wasn’t all about the money for us.

– You’ll be busiest when you first arrive. Regular car booters can spot a newbie a mile away, and they’ll take advantage of that. They’ll knock down your prices whilst you’re still trying to set up; then sell on from their pitch across the field… sneaky. If this wasn’t all about getting rid of your stuff… I’d be recommending you do the same haha

– Enjoy it!! People watch. Speak to the people around you. Don’t get hung up on prices, you’re there to get rid of things remember. Do you really need to keep hold of that bin for the sake of an extra 50p? by the last hour we were literally giving things away and forcing things on people; Like a bin, the guy didn’t really want, but for 10p he took it quite happily! 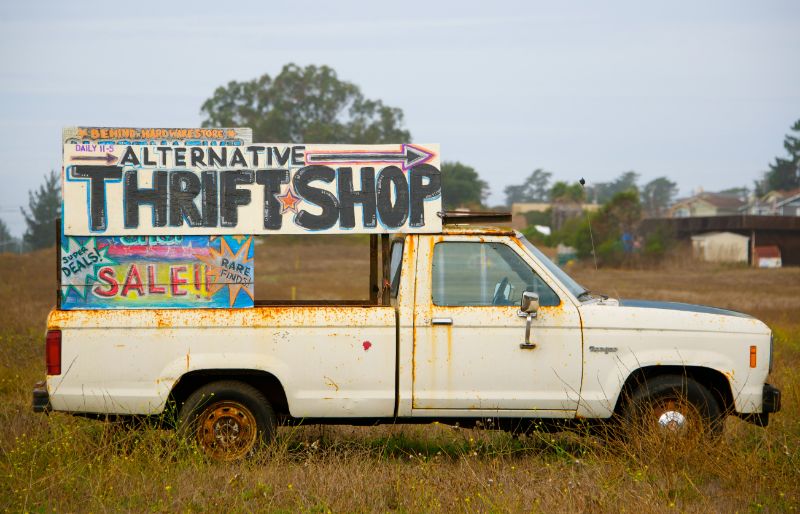 EBAY CAN BE YOUR WORST NIGHTMARE!

eBay, Gumtree and PayPal are a minefield for those who aren’t used to selling on it. We thought it would be the easiest way of selling our bigger items because eBay via PayPal is safe right? Wrong. We contacted with potential scam after scam so I have one big pointer for staying safe with eBay…

– DO NOT accept PayPal for anything that isn’t being posted via recorded mail… papal doesn’t cover for items that aget collected/delivered in person, or sent via a courier that you haven’t organised yourself. Why? because there’s no proof that the item has been delivered, meaning the person buying can, and often will,  claim ALL their money back… leaving you without your expensive fridge, and down £400. Luckily we dodged that bullet before it was too late!!

Because of this, we always stated cash on collection for the larger household appliances. Those who are genuine will understand and organise collection OR pay extra £££s for recorded delivery. If not, deny the sale.

How To Move To New Zealand As A Brit! 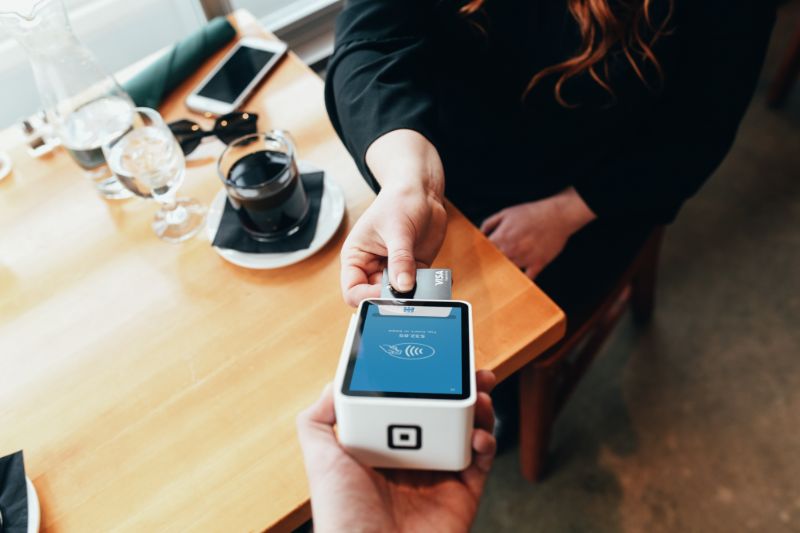 Facebook is known for being quite a dodgy territory when it comes to selling things these days but as the deadline for selling all of your stuff draws closer it becomes a real game-changer, especially if you’re willing to deliver.

We sold nearly all of our kitchen appliances and home accessories on local Facebook selling pages. There are always people looking for bargains and cheap accessories to help them set up their first home, taking full advantage of this will help you clear those last few pieces of ‘junk’ that it seems nobody wants; the trick is getting the price just low enough;

– Post it to every page, including Facebook’s ‘marketplace’, early on in your selling stages and as the days draw closer to you leaving drop the price. I can guarantee people will bite your arm off thinking they’ve got themselves a bargain.

How To Plan A Backpacking Trip To Australia

So you’ve tried to sell that last bundle of canvas pictures for 3 weeks now and you have one more week before you move out/start your big adventure… you have to ask yourself – is it really worth putting into storage?

If the answer is no, then GIVE IT AWAY.

Trust us, there is no better feeling than letting something go for free to somewhere to be appreciated instead of it stuck in a cupboard somewhere gathering dust. Charity shops are always looking for donations that they can sell on.

This is how we turned out junk into money to help fund our travels. Of course, we also relied heavily on living minimalist and saving as much of our last few wage checks as possible. Do you have any money-saving hacks? Let us know in the comments!

Home>Travel Planning>How to Turn Your Junk into Money to Fund Your Travels! 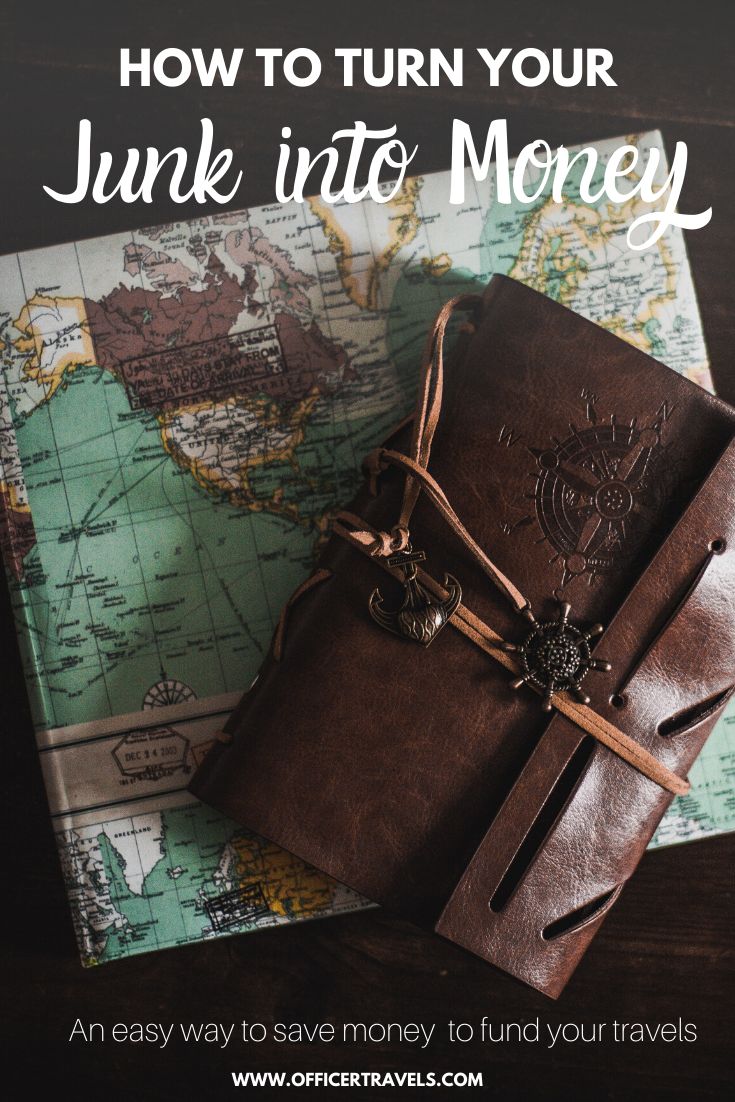 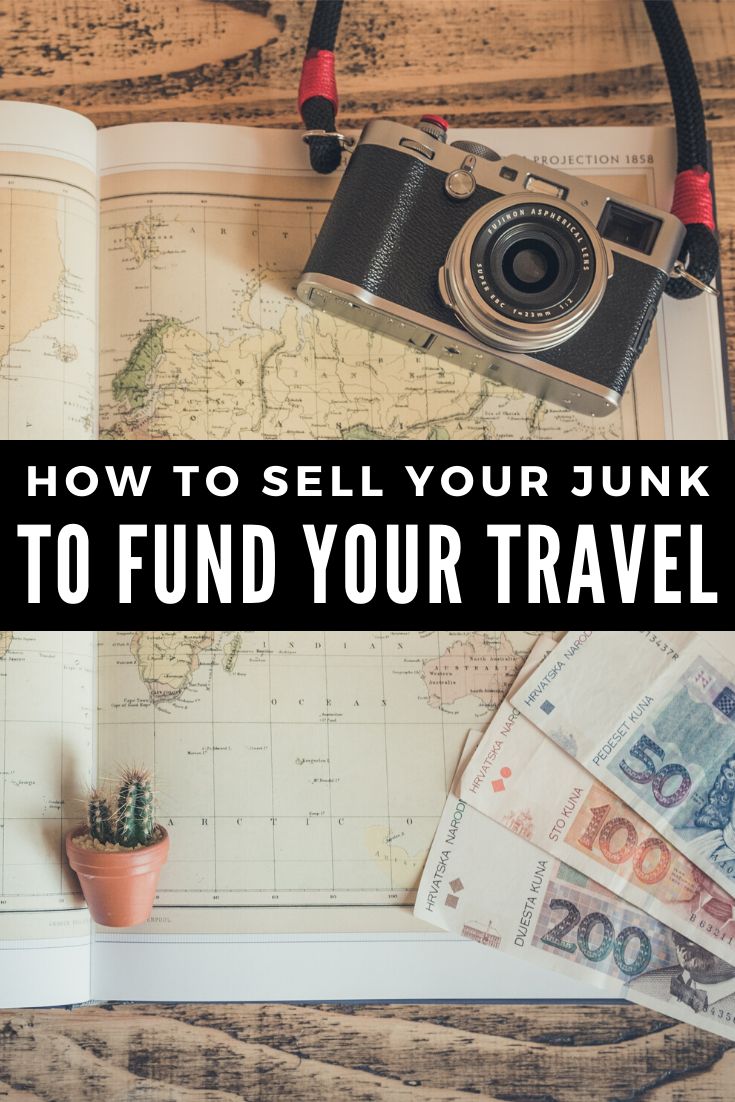 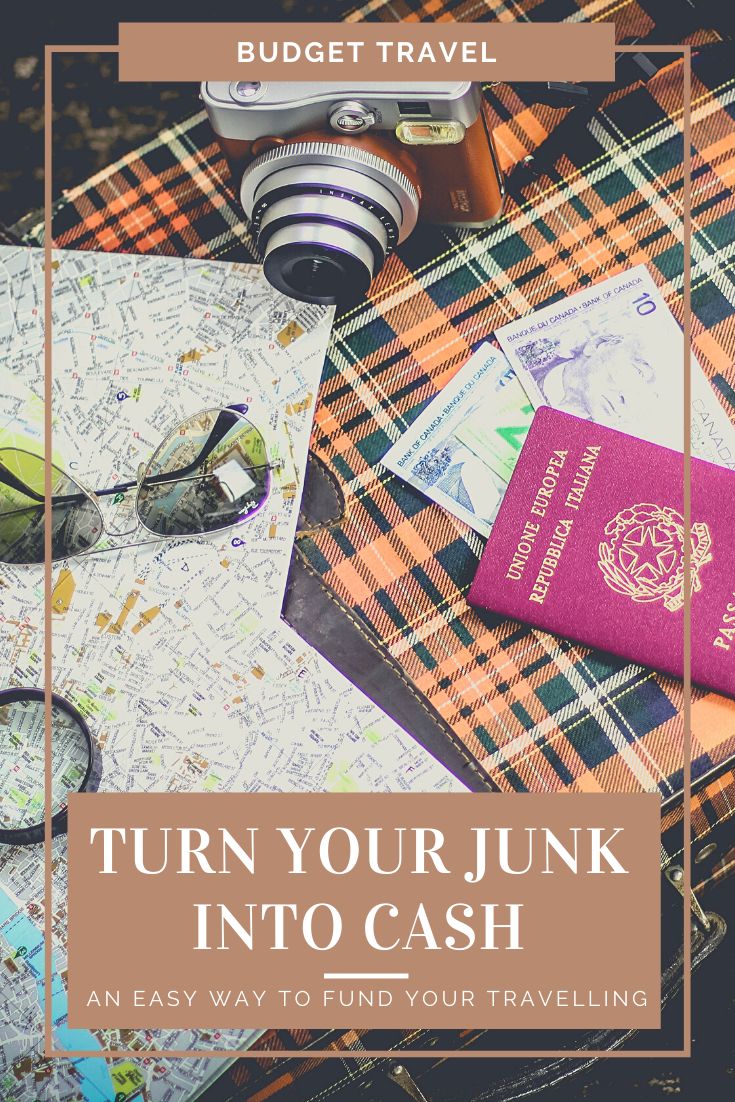